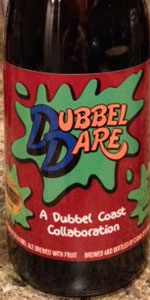 Again, this one must have aged to perfection given the previous ratings. Huge plum and date nose. Flavor is sweet dates, plum, and caramel finish. Sweet but really thin.

O - A nice American take on a double.

Thanks to rudzud for sharing.

Overall ok but nothing special.

Received in a trade.

A - Poured into a Kate the Great tulip a crystal clear brown hue with a thin halo that levees no lacing.

Overall - Not a pleasant beer. The fruit flavors are not working.

Appearance: Reddish brown or coppery color, transparent and swirls with carbonation. Three mm white head that lingers on the top.

Smell: At first smells like normal beer but a bit stronger, maybe a little like sour apple or some similar tart aroma.

Taste: First thing I notice is the alcohol which is a bit overpowering. After that I don't pick up much, maybe some very tart or almost sour apple like the smell.

Mouthfeel: Similar to taste the alcohol is the thing I notice most. Stings a bit at first and then feel that heat in the aftertaste. Other than that relatively light carbonation is noticeable.

Overall: I am Cigar City Brewing's biggest fan but this is not one of my particular favorites. The alcohol overpowers the rest of the beer and I had a hard time focusing on anything else. Understand that for the style to some extent, but still. I've had some 8-9% beers before, including those from CCB, disguised a little better.

When the assertive American-style beer makers of Cigar City and Alesmith join forces- their love child is a darring ale with Belgian-esque roots. This "Dubbel" ale garners inspiration from Belgium, but its demeanor is undeniably American.

The beer pours with a voluminous pour that casts a pillar of off-white foam to the top of the glass as the camel-colored body settles underneath. Lightly hazy, the ale shows an amber gaze through its unfiltered character.

Sweet aromas of toffee malt lead the way, but do so with fruity and spicy notions. Stone and pitted fruits of plumb, date and fig give a complex set of scents to the sweetness and give it a lightly tart and lightly wine-like "vinous" character. Its direct scent really sells its fruit and spice blend on top that soft malt pillow.

Its taste starts as toffee-rich as the sweetness layers onto the tongue. Its middle palate offers up that tangy orchard fruit first in the tone of apple and light cherry but then turns savory with dates, figs and mild raisin late. As the alcohol flavor comes out to play, it does so with a light rose wine tang.

But as the ale settles on the palate, it does so fairly dully as the carbonation is fast fleeting and it leaves an inordinant amount of residual sweetness to weigh on the palate like lighter carbonated British ales. Not expecting this from the usual expressively carbonated Belgian ales, its drinkability is somewhat compromised. Finishing warm, mildly acidic and semi-dry- the ale becomes much more of a "sipper" than a "drinker".

As the Belgian-esque inspirations play out, they do so with a simplicity and slightly one-dimensional character, much more muted than those found from Belgium. But this is fairly typical of American-brewed, Belgian-inspired ales. They simply lack the dryness, effervescence, depth of complexity or overall spirit than those they emulate. Through its shortcomings, the ale is well build and quite satisfying, more akin to English Old Ale or lighter bodied Barleywine.

This poured with an immensely filtered cognac color with a quickly fleeting head of fizzy bubbling.

The scent has a spearament like coolness with a bubblegum and clove aroma.

The flavor was interesting as my personal palate picked up some vinegar like tones to go along with sour Apple and some alcohol.

The feel was quite spritzy and effervescent.

I feel like this was simply not suited to my own taste and may be a very good example of the style, unfortunately I can't attest to it.

750 ML bottle poured in to a snifter.

Pours a reddish brown with a light tan tingly head.

Taste is a delicious, sweet, but not cloying, faintly fruity, caramel, and very good.

Mouthfeel is somewhat dry, and leaves me wanting more.

Overall this is a very good beer. Glad I had the chance to get it.

Thanks to moose3285 for this bottle...who doesn't want to try a collaboration between Alesmith & Cigar City? Really? 750ML bottle that looks vaguely cartoonish in line, I suppose, with the name. Split with my wife.

The pour is trapped in amber, with very low carbonation. Very fruity, pears might have the upper hand, with a Crystal Sugar coating. Very sweet.

Dubbel Dare is a three-sipper: mostly I take one sip & strike a Thinker pose, but this one took multiples. The unmistakable taste of mission figs (though I've never actually had one by itself) runs through this beer like Forrest Gump. Sweet, sweet, sweet takes over the midsection, spoonfulls of sugar that the slight spiciness of the yeast can't quite contain. Nice smooth caramel. Ridiculously easy to drink, I could fill up a small wooden leg with this brew.

A good beer that despite the effort & lineage really doesn't stray too far from its deep Belgian roots. Plus, it's almost gone already.

Bottle picked up from the brewery. Pours a deep red color with a small white head that is gone almost immediately. Aroma of fruits like cherries, figs, apples, pears, bread, yeast, sugar. Flavor is yeasty sweet cherries and apples, some plums, more sweet sugar. Mostly one dimensional without much depth in flavor like their Belgian brethren. This is nearly always the case for me with US made Belgian brews. Very sweet, not quite syrupy but not light either, saved by the prickly carbonation. Overall it is relatively tasty but not particularly memorable, with the sweetness bordering on dessert for this style.

750mL bomber poured into a snifter

Pours a brown iced tea color with two fingers of large, white, soapy bubbles that settle quickly. The nose has a big spicy yeast smell that includes nutmeg, coriander, and peppercorn, along with the smell of figs, dates, and raisins. While spices show up big in the nose, fruit dominates the taste. I get a lot of plum skin, fig, and raisin up front with a nutty backbone, all of which is strongly reminiscent of Nostradamus Belgian strong ale. I don't get any indication of the coconut palm sugar that is touted on the label. The finish leaves a slight yeast bitterness with some lingering spiciness and earthiness, so this beer has a fairly complex taste but with a good balance. The body is medium-light with medium carbonation. Overall, a worthy entry in the dubbel category and a very good beer.

Glassware: snifter
Pours a dark amber color with a light foam head, but dissipates leaving little lacing.
Aroma of fresh figs with sweet fig flavor to match.
Lighter on the mouth feel than I would have expected, but balanced well, not overly sweet or malty.

Pours a medium amber/ruby in color with a short white head.

The fruit notes are equally big in the flavor. This is a complex brew, with earthy fruit flavors (the label says it was fermented with dates and figs) mixing with caramel flavors from the coconut palm sugar. Noticeable alcohol flavor and burn, too, even though this beer is "only" 8 percent alcohol. Finishes dry.

Overall this is an excellent beer. It's expensive, so consider it for a special occasion. I'm enjoying it as a nice alternative to the IPA kick I've been on.

Dubbel Dare from Cigar City Brewing
Beer rating: 83 out of 100 with 126 ratings