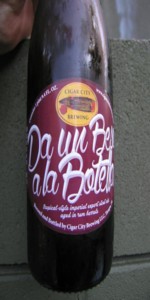 Rated by KensWorld from Florida

Taste has me digging the heavy roasted malt and rum barrel interplay. This now makes 2 CCB rum barrel beers I like, much less on the same day, so they are the masters. Props for the export stout style, so many only going for the gigantic imperial stouts these days. Slightly lower carbonation on this one. Has some Russian Imperial Stout like ashiness, but largely the yeast, hop and roasted malt driven bitterness is largely fitting and melding with the other aspects of the beer. Good equal parts roasty, bitter and ashy. Small hit of a cola like note with a slice of papaya in it. Cool how you can simultaneously have ashy and oily going but it does.

At the end of the day, I liked the beer, didn't love it, but put some respect on it, its a subgenre stout style you don't see too often, and it works.

Reviewed by The_Snow_Bird from Florida

Reviewed by Lochnessmonster from Florida

Dark brown viscous body with a thin beige head. Lovely aroma. Rum character cuts through in both the nose and flavor. Graceful, elegant, drinkable. I have to go home now.

S: Rum and accompanying spices, vanilla, chocolate and roasted malts. Leathery and tannic, but sweet maltiness comes to the fore.

T: Rum and chocolate up front. Sweet sticky malts with a noticeable roast character. Vanilla. Some oak tannins dry this out some, but the sweet flavors from rum and malts dominate. There's a touch of moist tobacco near the end, and then more rum burn.

M: A thick sticky mouthfeel, especially for a beer described as an Export Stout. The alcohol burn seems restrained for a barrel-aged beer. Low carbonation sensation.

O: A good beer, but rum on top of a sweet stout just wast my favorite. I though it comes across as lacking something - a balancing bitter flavor, or a fruit presence, or something. But I feel like it was as good as it could have been within the concept of the beer and the flavors present.