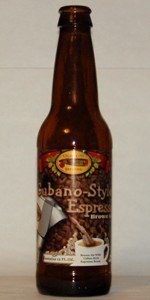 Notes: This rich brown ale is redolent with Cuban-style roasted espresso beans, sweet caramel and toffee and hints of dry nuttiness. Cuban Espresso is a popular drink in the Cigar City of Tampa owing to its many Sicilian and Cuban immigrants. The beans for Cubano-Style Espresso Brown Ale are roasted locally by Mazzaro's Italian Market and Deli in St. Petersburg to our exact specifications.

Pours a rich mahogany brown that sits dark in the glass and has a reddish hue. Three fingers of light brown foam head that’s far too quick to dissipate, but leaves thick webbed lacing.

Brown bread, sugar, breakfast blend coffee and a little milk in the taste with a semi-dry finish.

Medium bodied with just a hint of creaminess and adequate carbonation.

The coffee flavors in this are nice and meld well with the brown ale style, and the sugary Cubano element is well-balanced to my taste, but for a self-described espresso beer, I would have expected the coffee to be bolder. Still enjoyable. 9/10/18 canned on date.

A – Medium brown, very high clarity, some opacity but generally can see through it pretty well. Red tints where the light shines more directly. An inch of deep tan foamy head, with low retention.

T – Dark roasted coffee with a dollop of cream, silky French vanilla. The vanilla shows through more as the beer warms. Light gourmet chocolate syrup. Malt mostly supports the rest, some roasted notes are there. Any hop bitterness is overwhelmed by the coffee and roasted malt bitterness.

M – Fairly light body, not much heavier than iced coffee. Carbonation is moderate, and helps to balance the roasted coffee flavors.

O – Certainly a well-made coffee beer, but pretty straightforward with no real surprises. But there’s a lot to be said for doing this style well.

Served in a snifter, it appears a dark brown color with some redness about that looks to be a very deep ruby color when held to the light. A finger of creamy head covers the top of the brew and coats the glassware. Aroma of this brew has a roasty nose of fresh espresso blended with some smokey notes. Dare I say it actually is reminescent of a cigar? Taste includes coffee blended with the cigar/tobacco flavors previously indicted by the nose. This tobacco flavor lingers in the mouth. This brew has a light feel with a mild level of carbonation. At times it feels a bit watery but it makes up for it with lots of flavor.

Tastes like a coffee stout with more carbonation. Bit of a sweet aftertaste. Nice coffee flavor

I originally tried this paired with a Tres Leches cake during the final course of a beer dinner at Padrino’s Cuban Restaurant just outside of Orlando. After trying it, I knew that I would have to find some bottles so I could do a further review. I typically am not a huge fan of brown ales and it really takes something extraordinary for me to even comment about them. This one of the reasons why I was so surprised with how much I enjoyed this.

Appearance – A medium shade of brown. I could see completely through this although it was dark. Not cloudy at all.

Smell – After opening the bottle, the coffee smell wasn’t coming completely through. But after waiting for a few minutes for the temperature to rise, it really developed nicely. The coffee smell was there, but not overpowering. I’ve never tried a Cubano Espresso roast by itself, so I can’t comment on similarities, but the smell was a sweet coffee smell with hints of vanilla lingering in the background. I also noted a small amount of maple syrup.

Taste – No hops or bitterness at all. At first contact, you would recognize the roasted malt, just as with most brown ales. However, there is nice subtle hint of coffee, vanilla and crème that comes through. Drink this slowly and witness the flavors develop more as it warms. There is absolutely no alcohol burn or presence, as this is a very low ABV beer.

Mouthfeel – This is a very drinkable beer. It has the body to let you know it’s a brown ale, but is not heavy by any means. I could easily drink many of them during one session.

Overall – I feel that this was an excellent offering from Cigar City. I feel that due to the sweetness and coffee notes, it’s a great beer to pair with desserts. However, it’s versatile and can be enjoyed at any time. Heck, I’d drink this with breakfast. Being a really big fan of coffee beers, it was nice to try a different take on one. Typically coffee is associated with stouts, but Cigar City clearly was able to reach an equally complex beer without adding all of the alcohol when making this one.

First had: on tap at Woody's, Philly, PA

Poured a very cloudy cedar brown color with a small cap of tannish head that retained as a ringlet and left a bit of lacing on the glass. Nutty aroma rife with coffee grounds. Taste of coffee grounds, as promised by the nose, nutty, caramel malts, toasted grains, grassy and slightly astringent in the finish. Body was about medium, a little thin-tasting, but generally pretty drinkable. Not something I'd go out of the way for again.

32oz growler from the Bowery Whole Foods. Pours a dark brown with ruby hues and very little head. Some lacing. The aroma has lots of coffee and espresso with some nuttiness and more espresso. The taste is more of the espresso flavor with some light bready malts, hints of caramel, and nuts. Earthy. More espresso at the end with a hint of chocolate, and maybe even dark cherry. But, basically this beer is all about the espresso/coffee flavor, and it works. Lighter mouthfeel. Very drinkable. Overall, really good beer if you like coffee.