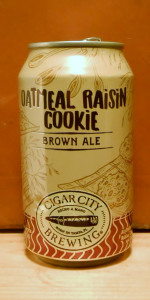 Notes: The genesis of the beer you're holding in your hand was pretty simple. We asked ourselves, "What if a beer tasted like an oatmeal raisin cookie?" The answer to our rhetorical question was to add raisins, lactose and cinnamon to Maduro, our English-style Brown Ale, a beer that showcases flavors of caramel, toffee and chocolate. The combination of the base beer and the additional ingredients resulted in a beer that tastes like it was baked in Grandma's oven.

Brown with an amber tinge, topped with forur fingers of beige head. It smells like cinnamon, raisin, brown malts.

I got this in Waynesville North Carolina and I’m drinking it in Redding California July 24, 2020.

*Poured into a Teku glass from a 12oz can*

Poured a dark coca-cola brown with a khaki colored half-finger thick head. Had very little amount of rocky bubbles on the head and had very little head retention.

This REALLY does smell like an oatmeal raisin cookie. The brown sugar aroma coupled with nutty almonds and notes of raisins really make this smell like a satisfyingly sweet oatmeal raisin cookie. Despite this, I also found that there was a large presence of cinnamon--so much in fact that I felt a more appropriate name for this would have been Cinnamon Oatmeal Raisin Cookie. I also picked up on more of its subtle aromas such as medium roast coffee, the sweetness of the malts, and a bit of milk chocolate. But these aromas were easily overwhelmed with the oatmeal raisin cookie and cinnamon that they were really faint.

The taste follows the nose, not really presenting me with a lot of surprises. There was an oatmeal raisin cookie taste upfront: brown sugar, almonds, and raisins, which developed into cinnamon and subtle milk chocolate. This then ends with a slight coffee-like earthy bitterness from the hops.

This was pretty medium bodied with a light amount of carbonation. There was no lingering aftertaste and was smooth and silky.

Really solid and drink-able overall, the tastes and aromas were definitely interesting and flavorful but they weren't as bold as I would have liked it. This is definitely a really good brown ale, and I would undoubtedly drink this again.

Tried this beer seven months ago, when some friends brought a growler back for me, and it was a 5 over all - it was so good I kept searching it at a store found it and let my beer friends try- everyone thought it was great

Put some away for later- Covid 19 hit I brought it back out - still a good 4.5 beer - but some beers don't age good

Pours a deep brown with 1.5 fingers of tan head that fades slowly, no lacing

Smells of rich dark malts, roast, cinnamon, toffee, and dark fruits, raisins of course. Damn near perfect in its' simplicity and it practically invites you to try it

The taste is more of the same, but that whole oatmeal raisin vibe really comes out and is backed up by the malt. There's a wonderful chocolate type note on the back end of the sip which lends a mild roasty bitterness that helps this from getting too sweet. This is wonderfully spiced

Superrrrr easy drinking with help from the lactose, I could barely put it down for ling enough to review it! Light medium bodied and very creamy with high carbonation, almost like it's on nitro but still boldly flavorful

Damn, I definitely just found one of my new favorites, and I never really thought I'd say that about a brown ale. It's incredible how authentic this is to an oatmeal raisin cookie, but doesn't go over the top at all. Absolutely getting way more of this

Pretty lackluster. Exceptionally thin and watery and far from what I hoped it would be.

12oz can. Poured out a clear, golden brown color with a small, khaki-colored head of foam. It smelled of oatmeal, raisin and chocolate notes. Sweet chocolate, raisin and some oatmeal taste. Very much like a cookie.

Wow, the third highest rated English Brown on BA, that's quite the illustrious distinction, CCB. Well, they also have the top spot locked down with Maduro (which I assume this is at least partially based on, considering the back of the can mentions a "base brown ale"), so that's not too surprising, I suppose.

The pour here is a fairly dark brown hue with mahogany undertones when held up to light, as well as some slight ruby in there as well. Overall, it's surprisingly deep; a few SRM higher than I expected, I think, honestly. The head is a medium-khaki and builds up to a solid two fingers before settling down with a half-finger of consistent foam. A bit of sudsy yet consistent lace shows up here as well. Nice surface coverage here, as well. Overall, a quite-good looking brown.

The nose is definitely more of a brown ale in the traditional style than any kind of adjunct-laden "dessert-ified" version of Maduro or anything, so if your concern was that this would deviate too strongly from the original brown ale style, consider those specific fears allayed. Sure, I pick up some of the light baking spice along with some dark fruit undertones and esters, but it really does not seem like they went too hard or leaned too much on those aspects whatsoever. The main thrust of the scent here is chocolate and toffee with some light molasses, brown sugar, brown bread, and a touch of nuttiness pushing through. Overall, quite nice.

Again, I was a little afraid the raisin element would blindside me on the palate, but it's very much a backing note to the concerto of intense chocolatey depth going on here. The lactose does slightly affect the mouthfeel, almost pushing this into a kind of "lighter-bodied oatmeal stout"-ish category going by feel alone. The nuttiness and palate-brightening spice of cinnamon does a good job here providing some levity from the intense maltiness. I will say that this drinks slightly stronger than its professed 5.5% ABV, but it's not really problematic, just a note. A light touch of earthy hops and a bolstering grassiness combined with the characterful nature of the yeast lends a slightly-fruity and semi-dry element to the finish of this beer. Enjoyable enough but probably not an everyday drinker. I appreciate it for what it is, though, and think it's definitely something worth checking out.

12oz canned on 1/13/20. Opened 2/8/20.
1 finger sand colored head, retains well at 1/4". Dark brown ale with good clarity against the light. No lacing but it could be my glass.
Lightly roasted and nutty malt. Subtle wafts of dark fruit and cinnamon spice.
Semi-sweet chocolate, raisin fruit sweetness, lightly spiced with cinnamon...tastes like a cookie.
Thinner side of medium bodied, some heft here would be good. Carbonation is fine. Slightly long and sweet finish...probably no way around that in a cookie beer.
Good.

Poured from a can. Dark brown with a white head. Smells of cinnamon, vanilla and oatmeal. Flavor follows the smell with a slight hint of raisins. It smells and tastes like the cookie it represents.