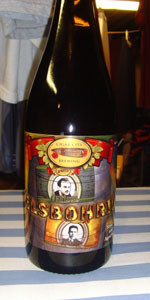 Notes: "A blend of Dirac and Bohr Imperial Sweet Stouts with Raisins, aged in Rum Barrels."

"Stout with Raisins and Cinnamon Aged in Rum Barrels"

Shared bottle at RBNAG 2011. Black colour, no head. Intense aroma of dark malts, molasses and raisins.The flavour has the same elements as the aroma, with loads of alcohol.

750ml bottle poured into a wine glass. Huge thanks to Sam for hooking me up with this, been wanting to try this since trying Dirac over a year ago. Bottled in 2011, cellared for over 2 years.

A- Pours an opaque dark black, not much head formss, fairly still top, bit of mocha lacing is left along the sides.

T- Dark fruits, figs, lightly rum soaked raisins, just a faint pinch of cinnamon on the finish, lightly bitter chocolate, some fudge. Nice complexity, nice balance without anything dominating too much. Not overly sweet, nice complexity, tasty although age may have lost a bit of flavor.

O- This beer was released about 2.5 years ago, at this point it is still holding up fairly well. I never had it fresh but I imagine at this point it's lost a little bit of the raisin and cinnamon flavor but smoothed out nicely. The rum barrels only played a very subtle role in the beer and didn't come out too much just making a subtle rum soaked raisin presence. Comparing to having Dirac fairly fresh (never had Bohr), Nielsbohrium has less of a raisin or cinnamon presence but is noticeably smoother.

NYE bottle share a Proof. Poured a pitch black with zero head. No collar, and no lacing, but some decent legs from the thick body. Aroma is of very dark malt with a lot of coffee and a touch of spice (cinnamon, clove or nutmeg?). Taste has a lot of raisin up front, with the deep malt in the middle, a touch of booze (rum) throughout. Extremely low carbonation but that thick body lends to a good mouthfeel.