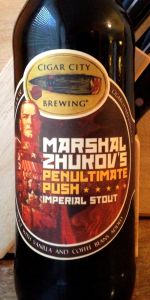 Notes: This Russian Imperial Stout is dedicated to Georgy Zhukov, arguably one of the finest generals of World War II. Specifically, it is dedicated to the push by Zhukov's 1st Belorussian Front of the Red Army through the German-occupied territory of East Prussia in early 1945., setting the stage for the Red Army's final maneuver into Berlin to end the war. Freshly roasted coffee beans and vanilla were added to this juggernaut of an imperial stout, the only style of beer bold and strong enough to share its name with The Marshall himself.

The first impression this brew bestows upon the nose is the same aroma I get when I grind my whole beans in the morning. Decadent cacao nibs follow, with some sweet caramel notes quickly in pursuit. The vanilla joins the party fashionably late, adding "finishing touches" to an already-exuberant and overly-rich/thick stout aroma party taking place in the glass.
⠀⠀⠀⠀⠀⠀
Dark chocolate, rich coffee, figs, roasty malts, slight lactose, and soothing vanilla formulate the palatal tapestry of this brew. The coffee is well-subdued, with nuances resembling Blue Bottle's NOLA iced coffee rather than the usual burnt as hell french roast espresso beans. Vanilla provides a nice backdrop to the mesh of incredible flavors involved in this beer: there's just a small hint of spiciness like those inevitably expressed in beers brewed with fresh vanilla beans, but the spice neither overwhelms nor offends the senses; in fact it does just enough to counterblance that little hint of sweetness that accompanies the coffee on the palate. I can't say enough good things about the balance in this beer. Finishes in a gray area of dry and slightly sweet; kind of marshmallow-y, if that makes any sense.

This is the very definition of a winter sipping beer; as this is a Florida beer there's no ABV listed anywhere on the surface of the bottle, but there's no sign of heat anywhere during the drinking experience.

Random drunken thought: why is the genre known as "Russian Imperial Stout" when Americans without a shade of doubt produce the best examples of it? Asking for a friend.

This Russian Imperial Stout is black through and through. A thin, dense, mocha froth lasts a long while, leaving spotty lace. The creamy, dense pour clings to the glass in a thick film.

Mocha fudge is strong upon the initial impression. Equally strong is cappuccino, followed by a mild vanilla and bitter chocolate. Warm brownies are brought to mind all the while. Deep roasted chocolate eventually reveals the clean and forward alcohol. Warmth brings out nuttiness and Kahlua.

The flavors are dense, mirroring the nose. Bitter chocolate is balanced by sweet alcohol, while dark coffee alternates with bittersweet chocolate. Roasted malt is spectacular. Warmth brings out a hint of licorice and vanilla. The finish is long and reminiscent of brownie crust.

The dense body and smooth texture coats one's palate. This beer is better described as "as to be eaten rather than drunk". Soft carbonation and surprisingly controlled alcohol are cozy and warm.

This beer is a decadent luxury. It is definitely better with friends, but I imagine it would be exceptional in a vanilla ice cream float or with a cigar. It is a dessert beer that would go equally well with pondering. I look forward to trying it in proper glassware. This bottle was comforting with friends and family during a difficult time. That comfort will be forever linked to future experiences with this beer.

Pours an opaque dark brown almost black like oil color with khaki colored head. Coffee, lots of coffee, hints of vanilla, some chocolate, and plenty of roast on the nose; follows onto the palate. Full bodied. Finishes with more coffee and roast, a little chocolate sneaks in.

Sample at Mikkeller Beer Celebration Copenhagen 2017, red session. Aroma has roasted malt and dark chocolate. Taste starts bitter and roasty with baker's chocolate but continues with malt sweetness and a hint of caramel.

2017 bottle poured into a snifter. When cold I didn't pick up a lot of coffee or vanilla in the nose but did as it warmed. The coffee was much more present to me than vanilla in taste. Moderately thick with medium carbonation. A bit too much bitter roast for my tastes. I did not care for this as much as I had expected.

T: Chocolate fudge, roasted coffee beans, and vanilla. An inherent sweetness that comes off like molasses but balanced with the bitterness of the malts.

M: Full bodied with fairly light carbonation. Coats the tongue like a syrup without being heavy. Finish is sweet and a touch bitter.

650ml bottle, served in a snifter glass. Pours a dark black body, motor oil-esque, one finger mocha head, short retention and no lacing. Perhaps a little undercarbonated here. Smell is a thick chocolate and coffee combination; light smoke and toasted grain, a bit of dark fruit. The coffee seems to sharpen the base beer's tendencies to promote a leathery and tobacco-like flavour; the flavours meld together reasonably well otherwise. Milk chocolate, a touch of dark fruit, leathery tobacco and a trace of smoked grain, touch of vanilla. Mouthfeel is full bodied, substantial, slightly undercarbonated, smooth and a nice sipper. No heat. Finish is leathery with tobacco and a touch of coffee bitterness. The base stout dominates the adjuncts, which is not necessarily a bad thing.