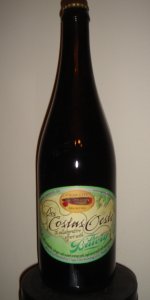 Thanks to Collin for yet another enjoyable CCB brew. This one was a violent gusher, and I lost a good 1/4 of the bottle upon cracking it up. Poured into Lost Abbey "Sinners and Saints" tulip.

Nose: Bright citrus shines quite well upon first whiff. It continues to be a big part. Some smells of funk, but not much "horse blanket". More on the spicy/citrus side of the Saison scale. A good amount of Belgian like sweetness and spice support the biting grapefruit/lemon.

Taste: Has quite the healthy pale malt base, but the sharpness of the grapefruit character cuts through that well. Decent balance, but this beer comes off kind of awkward and clunky. Doesn't have a whole lot of subtle notes, just big in your face flavors that wrestle for attention. Spice coming through, with some mild hop bitterness, and quite dry.

Mouth: Like I mentioned in the taste section, this beer isn't as subtle as I was hoping it would be. Carbonation is there, but it's failing to support too big a burden.

Drink and overall: Interesting beer, not easy to drink. I struggled to drink the 3/4 of a bottle I had, would have been nice to share with someone. I like the idea of the three different treatments on this beer, and the grapefruit expression was 10x better than cedar.

A: another gusher. The lemon spiral version also gushed for me. Thin head on a murky orange/golden body.

S: orange and grapefruit citrus, more tart than sweet with hint of corriander and lemon and some belgian yeast.

T: fairly syrupy quality to the citrus with lemon, grapefruit and orange. Nice balance between tartness and sweetness. Nice Belgian presence with yeast and herbs rounding out the finish. Very similar finish to the cedar and lemon versions.

M: medium body and moderate to high carbonation. not a very dry finish, definitely more moist than expected for the style.

Overall: I now have had all three of this series. For strong saisons these are very drinkable and very flavorful with excellent Belgian character.

Opened it up at about 55 F and it exploded everywhere. Didn't even get the cap off and it lost half a glass. Maybe my fault for opening warm.

A: beautiful saison with a large off-white head on an orange/gold body. The head stays for the glass since the carbonation is just rushing up from the bottom.

S: yeasty esters, earthiness, and citrus are the biggest smells. Smells a bit dry or bitter as well.

T: nice spicy and earthy taste, with less emphasis on the citrus. Some fruity flavor comes through. Amazingly, the 9% alcohol isn't detected until it's sitting in my stomach.

M: high carbonation - probably the highest I've ever seen outside of my homebrew mistakes. Body is light for a beer of this gravity, but still mediumish.

Poured into a Southern Tier tulip-style glass. No freshness date.

A- We've got a gusher! Foam almost immediately overflows out of the bottle once it's popped. Once poured, the beer has a dark amber color that's slightly hazy with a full inch of head that settles into a 1/2 inch head. Fluffy, slippery lacy.

T- The green olives come through almost as much in the taste. Hard to taste any grapefruit when there's so much of that going around. Even the aftertaste is like I'm drinking olive juice. It's not to the point where I don't feel like I'm drinking beer, but comes close. I know that it's just the wild bacteria causing this flavor, I'm just not a fan of this particular approach. A tiny bit of citrus surfaces once the palate gets acclimated but still doesn't pull things together.

O- Almost as big of a letdown as the cedar aged variation. The lemon wood aged is the only one of the series that's impressive, IMO.

A: Bright tangerine orange with a good white head.

S: Juicy citrus and coriander dominate in the nose. Some light lemon and vanilla.

T: The coriander is pretty strong, along with some cakey pale malt and lemony esters. Some slight dryness from the wood. Very citrusy, with a very slight acidity to it.

O: Somewhat interesting, but a little too heavy on the spices for me.