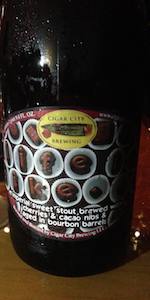 Tasted like the piece of chocolate from the holiday box with a cherry center. Not necessarily my cup of tea but uncanny how similar the flavor is and in general how much flavor this beer brings.

Stunning. As good as it gets.

Amazing complexity and structure. Perfect balance between cherry, chocolate, and bourbon as it moves across your mouth. No artificial sweetness and not syrupy at all. Finish is dry baker's chocolate.

Easily the best milk / sweet stout that I have ever had.

750ml poured into a Wakefield snifter.

Pours a deep, opaque black with hints of plum highlights. Even with an aggressive pour it's difficult to get much of a head; the one that is produced forms a rocky, garnet/khaki thin slice and dissipates quickly.

Nose is pretty impressive on this one... Black cherry, dark chocolate, a light alcoholic sweetness, bourbon, oak, and a hint of licorice.

Wow. The bottle says that the beer is an attempt to replicate biting into a cherry cordial, and i think they hit that pretty well! Follows the nose, with dark chocolate and candy cherries up front, supported by a slightly roasted malt base. Intermingled is a mild booziness with a light alcohol burn. The bottle doesn't state the ABV, but I'm guessing somewhere in the 9-11% range. Make no mistake, this is definitely a sweet stout, sweeter than what i typically prefer, but well done with well-integrated flavors. This is also being reviewed on the first day of release, which could be contributing to the heat on the palate.

Mouthfeel is pretty spot-on for the style, with very little carbonation leading to a rich, velvety texture. Not the chewiest stout I've ever had, but it certainly comes with a coating effect. Medium-long, sweet cherry aftertaste. But legit cherry, not a medicinal cherry flavor like i've found in some other cherry stouts.

Overall- I think it is a really well-produced beer, that accomplished exactly what the brewers set out to do. It is too sweet for my personal taste, and i likely wont seek this one out again, but for fans of the style, or if you're looking for a great dessert beer, you'll find it in this one.

Opened at a share a few weeks back. One of the highlights of the night. Still smooth and rich. Hints of sweetness and cherries. Bottle was stored in a beer fridge since being purchased.

I was in Tampa with a co-worker when this beer came out back about eight or nine months ago. I was on my way out if town and wanted to stop by CCB to grab some beers to go and maybe have one in the tap room. They had about three cases of this sitting in the fridge so I decided to get one. Turns out, I was there the day they released it and had no idea this beer was coming out or what it was about. Guess I was in the right place at the right time. I have been holding on to this one to try at a special occasion, but I am tired of waiting.

Pours from the 750ml bottle into a New Belgium snifter. Emerges pitch black and viscous, topped with a one finger sized, dark mocha colored head. Sporadic lacing and the retention is rather nice.

Aroma is bourbon, raw chocolate, and cherries. The cherry aroma lingers in the back, but the cocoa and bourbon are full fledged. Dark fruits also.

Wow. The cherry really returns in the flavor. Kind of reminds me of a cherry cordial, you know, one of those chocolate candies with cherries and rum, or whatever, inside. The kind of candy you love as a kid because it is the only way you can legally get alcohol? That taste always reminds me of Christmas and family reunions at my grandparents house, where we had these candies and my grandpa drank bourbon and ginger ales. The cherry outshines the chocolate but is on par with the bourbon. There is a raw alcohol bite to this that I like: its like they added raw bourbon, rather than the essence of bourbon from a barrel.

Its a sipper for sure, and tastes better as it warms. Full bodied and chewy and wonderful. I guess I can see why this is sought after. Glad I was able to enjoy it. Now, the conclusion of "Innocent" by Scott Turow.

Edit: if this beer is 15% abv, it is supremely hidden. I thought it was around 8 or so. The alcohol is hardly noticeable.

2017 vintage. Poured from a 750mL bottle into a cigar city snifter. Shared with Ryan.

Pours a deep brown body with a brown head that reduces to leave spotty and a ring of retention.

Aromas of heavy coffee and chocolate, vanilla and caramel and berries, cherries.

On the tongue is sweet milk chocolate and caramel covered cherries, finishes coffee and roasty, dark chocolate and toasted malts. More on the sweeter side, heavy body with low carbonation.

Enjoyable, and a bit more subdued than I was expecting. Not something I would actively seek out again, but a nice surprise.