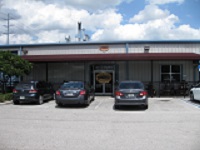 4.49/5  rDev -0.7%
vibe: 3.75 | quality: 4.75 | service: 4.25 | selection: 4.75
V: A very chill and relaxed environment, I do wish the building was more interesting but it has the pleasant and inviting feel of a local brewery and that I like
Q: Well I mean it is Cigar City, so yeah
S: The service was good and the staff was friendly, on par with anyone else but not above and beyond, no complaints here
SL: They have a wide selection of beers but not so many that the menu would seem bloated

4.57/5  rDev +1.1%
vibe: 4.5 | quality: 4.5 | service: 4.5 | selection: 4.75
Finally made it here after many years of wondering if I’d ever be in Tampa. A work trip made it happen. Went two days in a row, actually. Both weekend days and both times I was surprised how steady yet not packed it was. Don’t know if that’s good or bad. Solid industrial brewery feel as you pull into the parking lot. Inside is roomy and has a ton of seating. A small merch section and a few to-go coolers. Draft list is extensive and provides a good variety of styles. Food is outstanding. Service is meh….they’re just working there, they don’t seem to care much about the beers. I wish I made it here before the Oskar Blues acquisition. Seems like that may have tarnished the original appeal.
Dec 05, 2022
Rated: 4.43 by BeerMe8 from Florida

Reviewed by Bluerabbitbell from Pennsylvania

Rated by Ruger_44-Redhawk from Idaho

Reviewed by Newbeergeek1 from Maine

4.57/5  rDev +1.1%
vibe: 4.5 | quality: 4.5 | service: 4.5 | selection: 4.75
First time there and it was very good especially since it was pretty busy. Bar was attentive, helpful and my beer and food came in a very reasonable time. Beer choices were spectacular and the comraderie with others really was fun. I walked out with some cams and bottles that I could only get there. Yay.
Mar 14, 2020

I didn't realize how well-rounded CCB is until visiting the taproom - they nail a wide breadth of styles that I never associated their brewery with. I always perceived them as excelling in brown ales/porters/stouts on the one hand, and hoppy pales/IPAs/DIPAs on the other, but it's clear that their range is much broader than that.

Tried the following beers over the course of two visits:

Service was quick and competent and the "Who's Your Dumpling?" food truck provided some much-needed nourishment (we went for the Korean-style "mandu" dumplings). Overall, Cigar City is one of the best breweries in North America and I'm glad we made the pilgrimage here. Recommended.

As I understand they finished renovations on the main taproom about a week ago so things were still a bit fluid. Selection was above average with a lot of the heavy hitters and some specialty barrel aged beers that people would be excited to see.

Took the tour which was lasted about an hour and was a good deal for the money. Not much to set it apart from your typical brewery tour though.

Overall I respect the beers these guys are putting out and was happy to have seen where it comes from.

Rated by OldIrish from Philippines

Reviewed by bowzer4birdie from Illinois

4.71/5  rDev +4.2%
vibe: 4 | quality: 4.5 | service: 5 | selection: 5
You feel like you’re in the swamp when you’re in this place, and I mean that in a positive sense.
Diverse selection of brews and I was able to negotiate with one of the managers on a price for a bottle of BA Zhukov ‘16. Boom!
You can feel the humidity, the dankness, the moisture in the air and you want more of it. So you stay all day, get loaded and enjoy the swamp!

Reviewed by bradybeer from California

4.91/5  rDev +8.6%
vibe: 4.25 | quality: 5 | service: 5 | selection: 5
I think CC falls in the category of somewhat out of people's minds. But it should not be. Beers were outstanding. Tried sours, imperial stouts, and a few other stouts. Selection was amazing. Favorite was the cinnamon raisin cookie brown ale. If I had a designated driver it would have gotten ugly. A must visit brewery
May 17, 2019
Rated: 4.74 by LloydDobler from Indiana

Reviewed by dfillius from Iowa

4.23/5  rDev -6.4%
vibe: 3.5 | quality: 4.25 | service: 4.25 | selection: 4.5
Stopped in here one evening while in state briefly for work. No parking in main lot, so I pulled across the street in the well-labeled overflow lot. Ordered a delicious dinner from the food truck outside and sat down with a beer at a picnic table on the patio. It is kind of confusing how there are 2 bars so close to each other with different selections. Also one can accommodate small pours but the other can’t. I wish that all beers had been available in 8oz pours so I could have tried more as I had to drive later that evening. As it was I stuck to 5oz tasters and low abv.

Vibe was compromised also by the fact that all outdoor seating is also the smoking section so warts of smoke kept interrupting my enjoyment.

Overall selection was great, though I again I wish I could have sampled more variety in small pours. To go selection was also pretty good so I rounded out my night by grabbing 4 options from the cooler to enjoy later.

Beer quality was excellent. Good beers, brewed to style, with fun twists that didn’t detract from the overall package. The lemon peel and lemon drop hops lager was quite enjoyable.

Service was good, but I wish they had the flexibility to pour smaller glasses. I offered to pay the same price as a 12 oz. beer for an 8oz. pour and they apologized and poured the full thing. Of course I need to take responsibility cause I did drink the whole thing!

Worth the side trip from Orlando.

Rated by Robin14 from Florida

Reviewed by robotic_being from Florida

Rated by chopp02 from Ohio