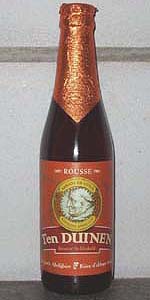 Notes:
View: Beers
Reviews: 5 | Ratings: 7 | Log in to view all ratings and sort

Amber coloured, lots of lacing, big foam.
Smells of sugared plums, sour cherries, flowers and slight vinegar.
Sweet at first, fruity, with plums and raisin, going a bit acidic and sour with cidery apples and even a bit more with sour cherries. Still, Belgian sugars keep it sweeter than sour. Grainy malts way behind the spicy yeasts (pepper, light licorice). Floral notes. Mildly bitter hops in the finish.
A tripel body, and i think this is the right style, not dubbel, but no biggie. Typical Huyghe grainy yeasty aftertaste. Good carbonation.
A nice and tasty one from Huyghe.

S: Alcohol confronts the senses then makes way for a belge yeast with nice floral touches

T: The tastes move from tangy bitter to a smooth creamy spice before finishing with a roasted malt. There are light hidden rasin or prune flavors and a strong alcohol coating that warms the belly nicely.

O: An alcoholic kick starts the battle between bitter and sweet, but when the viel of hops clears there is a very well balanced lingering on the palate. Extremely pleasing beer.

The smell is mostly from the yeast, somewhat sour.

The taste is sweet, candy sugar and raisins, apples and sherry. Finishing of with some small bitterness.

More sweet and sour than vinous. Sampled at a "blind" beer tasting at De Klomp, Linköping, Sweden. We did nearly nail it.

Ten Duinen Rousse, 33cL bottle, best before June '07. I was pretty sure this beer isn't the same as the other Duinen dubbel in the list, because the bottles look nothing like each other. I found that the Rousse exists on the Huyghe website, with the same label as on my beer.

Smell is also refreshing, slightly sweet slightly sour, some elements of candied sugar, sweet malt, faint aromas of very aley hops. Smells like the beer it's supposed to be.

Taste: Pleasing. Sweet, creamy tripel-style sugariness... in fact it's so tripel-like in character that I'm not sure if I chose the right style (although the back of the bottle says it's a dubbel). Strong alcohol astringency - a little bit burning, the alcohol is very clearly present. It's nice though, it adds to the overall warming wintry character of the beer. Other than general sweetness, maltiness, alcohol, there is not too much else that can be identified in the taste. Maybe even a little milky? Could be fermented lactose, but it's unlikely. I'm probably reading too much into it.

Mouthfeel is very full, upfront and beerlike, yet still smooth. I'm quite impressed. Drinkability is also good, because the beer is not so sink-your-teeth-into-it full-bodied that several can't be enjoyed. Overall, better than I was expecting.


Ten Duinen Rousse from Brouwerij Huyghe
Beer rating: 3.69 out of 5 with 7 ratings