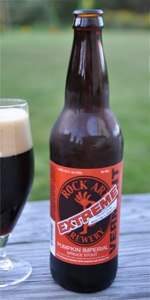 Notes: "A big stout brewed in the colonial fashion with large amounts of pumpkins and spruce tips added to the kettle for flavor and bittering qualities. The pumpkins compliment the malt flavors, and were used to add sugars to the mash. What ever you do, do not think this is going to taste like pumpkin pie. 50 IBUs."
View: Beers | Place Reviews
Reviews: 89 | Ratings: 201 | Log in to view all ratings and sort
Reviews by standardcherry:

22 oz bottle was poured into a Stella glass. Picked this up in VT during Thanksgiving weekend. Never seen it down here in MA, so I figured it was time to try it out.

Appearance: The beer poured a one finger mocha head. Pitch black and can't really notice anything else at all. Head has reduced to a thin layer with some lacing left on the glass.

Smell: A lot of coffee, mocha, and alcohol on the nose. Smells dry and spicy.

Taste: Same as above, but I could notice the spruce tips, earthiness,and pumpkin in the rear of the sip very subtlely. Also some bitterness towards the end. Spruce tips do a good job of masking the alcohol. This beer tastes better as it gets warmer.

Overall: This was a very interesting take on the style. With the subtleness of the pumpkin and the addition of the spruce tips to the kettle, this beer was better than I expected. Very scarily good and will have to grab a bottle next time in VT.

Grabbed this bomber on the way home from hill farmstead a few weeks back. Very unique brew from the brief tasting. Poured into an alchemist stemless tulip

S-sugary molasses with an appetizing earthy and toffee scent. Slightly syrupy without the pumpkin I was thinking would be there. A sweet and hearty presence

T- sweet aforementioned molasses with a dark piney tone that is thick and effective with the flavor process. Even a bitter element splashes in to make for a unique stout. The brown sugar finish makes for an interesting autumn brew

M- carbonated and smooth with flavor

O- Intetesting autumn brew from a good Vermont brewery. Some sweet autumn attributes that will make me want another if I pass it by

A - Pours a dark, dark brown almost black. The kicker is the fact that there is hardly any head! Even with an aggressive pour! What I got was less than one finger of light off white/tan head, left barely any side lacing, and left some light clumps of thin lacing on the brew.

S - Some nice chocolate notes and definate pine/spruce. Pretty interesting smells. Almost, almost like a really, really rich black IPA. Can't pick up any pumpkin at all though which is a huge disappointment.

T - Like the nose big chocolate flavors along with piney/spruce notes. Not IPA style pine, but legitimate pine (in a good way). Again, sadly, like the nose I pick up NO pumpkin.

M - Not nearly as thick as I would expect for a stout, let alone an imperial stout. Not heavy at all, almost watery. Again, I compare this to a black IPA. Would be a nice one, but a poor mouthfeel for an imperical stout!

D - This is a good drink, but not a good stout at all. The flavor is good, but pumpkin is misleading. The mouthfeel is far too watery for a stout, and I miss a good head. Flavor is good though.

Pours an opaque black, with ruby red highlights against the light. Little head that dissipates quickly, no lacing.

Taste of spruce and medium bodied porter. Lots of sweetness, no pumpkin. I suspect that the age of the bottle has contributed to the pumpkin receding into the background,

The beer pours an opaque brown with a mocha head that dissipates somewhat quickly. The smell is sweet malts with hints of brown sugar and piney hops. The taste has plenty of malt, which gives it a full mouthfeel and finishes with subtle hoppiness. It finishes dry and even with no hint of alcohol. A very well balanced beer that is great to sip. Not at all what you would expect with pumpkin in the name, but a very nice surprise.

A- dark, nice head, but not much of it
S- toasty malt, slight pine, earthy
T- chocolate-caramel, slightly resinous, touch of chocolate, slight squashy eathiness in the long finish
M- medium to heavy, not too creamy
D- decent, finished bomber with no problem

T – Roasted malt with just a touch of smoke. Tree bark, molasses, and a kiss of fresh pumpkin through the center. Char and pine on the backend.

M – Light body for the style, but not unpleasant. More porter than stout.

O – Light on the pumpkin, but over the profile is fresh and piney with a well integrated profile. Tastes almost like a wet-hop stout.

Poured from a bomber into a shaker pint, the beer is jet black, with some dark mahogany highlights around the edges, and a thick, dense, creamy head that is light tan, and slowly settles into a filmy coating. Aromas of roast, bitter coffee, hints of pumpkin sweetness, spruce highlights, bittersweet chocolate, and earthy tones. Flavors are roast and sweet initially, with highlights of pumpkin, a solid dose of bittersweet baker's chocolate, woody notes, and hints of pumpkin. Creamy overtones help round some edges and keep an overall balance. The body is robust, creamy, and smooth throughout. The aftertaste is smoked, roasted, and bitter, with a chocolate and subtle pumpkin linger. Bitter, slightly dry finish, with a roasted linger. Good, solid, tasty brew.

Pumpkin Imperial Spruce Stout opens with a malty, slightly spicy aroma that has little, if any, pumpkin notes. Instead, the aromas begin with light stout notes, including chocolate malt, dark and milk chocolate, touches of coffee and cream, and add to that a light sprinkling of spruce (which comes across as a hoppy pine note), and even gentler touches of anise. Some brown sugars also rise to the surface. As a whole, the aromas are light, and tend to fade quickly, but are still enticing.

On the tongue, the beer begins with a huge dose of pine and spruce, making at least that part of the beer's name immediately apparent. The spruce adds a good hint of bitter resin and oil to the mixture, coming across much like what the aroma of a pine tree would taste like if distilled: heavy on sap, lemon, and anise. Beneath that is a decent stout, including coffee, chocolate malt, and ash. Hints of pumpkin add welcome sugary, earthy flavors to the palate, slightly tempering the bitter oils and coffees. Hops bring extra bitterness, as well as lemons and grapefruit zest. But the spruce tips definitely remain throughout the mouthful as the dominant flavor, and even dominate the aftertaste, which lingers in sprucy oils and fading hints of coffee and chocolate malt for quite some time. Mouthfeel is medium, and carbonation is medium.

Overall, this is certainly interesting beer, though I'm not sure if I would have ever guessed that pumpkin had been added had it not been so noted on the label. Instead, the spruce dominates with its oily, anise-like presence, and while the flavor is intriguing and nicely nuanced, it does tend to overly color the flavor profile, and does not let the other flavors come through as much as they should. The beer is still worth drinking, but as the label notes, one should "not think this is going to taste like pumpkin pie," and should expect instead a more Christmas-y flavor than a Thanksgiving one.

Received a 22 fl oz bottle in a trade w/ LarryG, not sure the estimated price, & shared w/ GeoffTheAleMan. Poured from the Bright Orange bottle with words like "EXTREME", VERMONT, & Pumpkin Imperial Spruce Stout in Black into a 16oz Samuel Adams Imperial Pint Glass. Does not have a freshness date.

Aroma- VERY strong chocolate aroma with tons of roasted malts. Can sense this is going to be a very strong stout but Spruce?!?! Nothing to do with the season or any type of pumpkin beer so far.

Appearance- Pours a 1 finger, dark brown head that stays and keeps bubbles around. Has a dark brown and mighty viscous body. Leaves thick lacing behind.

Flavor- Strong malts and chocolate once again! Roasty and very great! No pumpkin/spruce once again... Light bitterness at the finish.

Mouthfeel- Medium-Full Bodied, Medium Carbonation, Smooth, and leaves a bit of booziness on the palate.

Overall Impression- Imperial Stout & Spruce OR pumpkin can't be mixed... I was wondering how they were going to feed in Pumpkin or the Spruce characteristics and they didn't... Weak for a pumpkin style but for an Imperial Stout, great! I had to rate this one accordingly (could have been a B or higher, but when they say its a "Spruce Stout", this must be included!). Thanks for the interesting one LarryG!

As many of you know, I love stout beers. However, I've run into my first stout beer that I was disappointed with. Rock Art's Imperial pumpkin spruce stout is that beer. A very translucent black color indicates it's weakness in body. A very thin head also tells you not much in carbonation or body. The taste is of burnt coffee with a hint of pine. Moderate bitterness which lingers afterwards.

This beer was worth trying, it is far from a standard pumpkin beer with extensive spruce addition and little else to offer. The beer is worthy trying, but seems more like a novelty save the opportunity for a gin lover’s beer to shine. Looks average brown with some low carb evidence. Spruce nose. Some medium body and lower carb and dry finish.