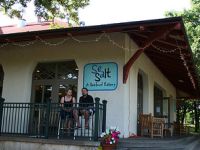 View: Place Reviews
Reviews: 5 | Ratings: 7 | Log in to view all ratings and sort
Reviews by AllSeeingPie:

Not really a beer bar but a cafeteria selling good beer and seafood.
Located next to the Minnehaha Falls this makes a great place to stop after a walk round the park.The beers consisted of three Surly and three others one of which was from Summit. I had the Furious which was delicious. Food is a range of seafood from your normal fried fish to more exotic dishes. I had the fried oyster po'boy which was really good. A very enjoyable place to have good food and beer. I'm going to be back hopefully quite often.

This is a really cool place near the Falls. Lots of outdoor seating during the summer. You order in a cafeteria-style line so it's a little awkward to buy a beer. Small local selection of beers are good though.

This is next to Minnehaha Falls in a big park and at the intersection of a bike trail along the Mississippi and Minnehaha Creek. It is often crowded but the food is good and they have a decent beer selection especially for a place in a park - this is not your old hot dog stand. Very nice.

In the pavilion by the minnehaha falls..what a beautiful park area and falls ..i dont know why i dont come here more often...now i have a great reason and its called sea salt..we stopped by last weekend and to my surprise that had 8 taps going with 2 Surly ans 2 Summit some Lagunitas ipa"s,and many bottled beer offerings..we settled on surly furious and lagunitas ipa,both great..we had fish tacos and a fish basket calamari and oysters..this place is very clean with great service and a nice tap list..a beautiful day in the falls/park with great food although pricey and great brew on tap..sad to find out they will be closed at the end of October..i will be coming here many more times

I stopped by here with some friends on their recommendation. They told me that they had a good beer selection, but I was skeptical. I just about freaked out when I saw what they had to offer.

Sea Salt is located in Minnehaha Falls park in what looks like a pavilion in the middle of a field with plenty of large old trees. The river is just about visible if you're out on the patio which runs around the back side of the building. We ordered first inside and then went to grab a patio table. The inside is rather dull and cafeteria like, but the patio seating in the middle of an amazing urban getaway is priceless.

I'll start with the beer. They had six taps; three Sulrly's, two Summit's and one Schell's. Six Minnesota taps!?!? Get out of here! That's amazing. Local beer advocacy at it's best! For bottles, they had about 20 or so to choose from to include Bell's and other Midwestern brews. The only crap in a bottle was Heineken and High Life. Wow. I concluded instantly that this place needed to be on BA. We settled on a pitcher of Furious and a pitcher of CynicAle. Mmmm.

The story I heard is that some folks who own a large seafood transportation business opened this place up, so the focus is seafood. A glance at the menu is pretty much all seafood. I got some fish tacos and the lady got a shrimp poorboy. Both were pretty good, but not amazing. It was quality stuff for sure, but it didn't blow my mind. They also had a wide selection of hot sauces available to choose from.

There wasn't much along the lines of service. You order at the counter and take your beer to where you sit and someone brings you your food when its ready. We didn't really ask anything of our server, so I can't comment. I guess it was fine.

I'm already looking forward to heading back to this place next summer to enjoy some more Surly and tasty fish tacos.

Sea Salt Eatery in Minneapolis, MN
Place rating: 4.12 out of 5 with 7 ratings