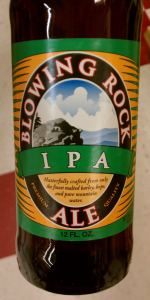 Scooped a sixer of this at my local Harris Teeter. I was in the market for some Noble Pils but I settled for this stuff. I had never seen it before and the name was quite intriguing.

It wasn't until I got home until I realized that the beer label was a complete contradiction. The beer itself is called "Blowing Rock IPA" and it's brewed by The Boone Brewing Company (allegedly). In actuality, this stuff is concocted in Wilkes-Barre, Pennsyvlania by Lion Brewery, and the name "Boone Brewing" is presumably contracted out.

I was willing to lay all this aside, however; the taste of a beer should speak for itself.

I cracked this bottle and was blown away by the hop content that the nose seemed to contain. The stuff smelled pretty damn amazing! It wasn't until I tasted it that I noticed a fair amount of malt to counteract this. The beer itself registers at 60 IBUs, and I think that's a pretty accurate assessment.

Extremely drinkable. Hoppy, without too much bite. I don't think the alcohol content is terribly high...or is it? Hard to say. But drinkable? Absolutely.

If you can find this stuff, definitely get a sixer of it. I think it's definitely worth. Apparently there are no reviews for it yet...that's soon to change.

I liked this IPA a lot! The smell was incredible! Nice floral notes, with grapefruit, and mild grassy notes. The taste was really good. Grapefruit with a smooth hoppy bite. Very drinkable, with nice medium body mouthfeel. I would definitely buy again, and am looking forward to trying other offerings from Blowing Rock!

This is a rather average IPA. It lacks depth or a distinct character. It's all hops with little balance, and the hop character is not very pleasing. Avoid.

L - Copper with clarity, 1 finger of head and some lacing left on the glass

T - Nice mix of citrus and bitter hops. Hoppy up front but aftertaste is a little too metallic

O - This one is better than the other reviews I read. Pretty good easy drinking IPA

Crisp taste. Not so IPA-ish to me.

Pours an gold/amber with a white head. Smell is piney and some grapefruit hops. Taste is similar but finishes with a terrible dryness. This is not hoppy enough to quite be an IPA. Mouthfeel is medium weight and way too dry for an IPA, this killed the beer for me.

Very light and dry for the style with strangely subdued hops. Would not buy again considering the huge variety of IPAs out there.