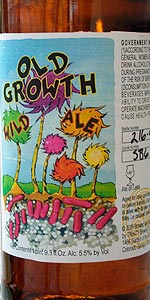 Thanks again to TurdFurgison for sharing this one.

A - Brownish colored beer that looked kind of dead. No real head, not really anything else. Kind of an ugly looking beer, particularly for an American Wild.

S - Monsterously sour smelling beer with some candy and off-chemical smells. Not really sure what to say about this, it smells slightly unpleasant due to the chemicals.

T - It's incredibly sour, which I'm assuming is suppose to be the focus of this. It's almost too sour to drink, and the chemical aftertaste makes it a little bad.

O - If it's novelty sour you're going for, this one actually is a winner. Not a huge fan, as the taste just isn't all that good. was fun to try, but wouldn't be interested in getting this one again.

Poured into a goblet. This beer had around a year of age in the bottle when I drank it. It was from the original batch, and aged in barrel #3, which was a New Belgium barrel. Unblended.

Pours with no head whatsoever. No bubbles rising in the perfectly clear crimson liquid. Looks as if it isn't carbonated. Deep red body, very interesting and unique.

I have smelled nothing like this in a beer before. It took a minute of thinking to place the smell because it is not something I have smelled in a food or drink before. Spray paint... very clearly distinct spray paint smell. Some serious funk is present as well but is almost completely overpowered by the aerosol paint smell.

For the first 15 minutes that this beer was exposed to the air, pretty much all I could get in the flavor was spray paint and a puckering tartness. As it breathed however, the spray paint fell away and some seriously funky cherries, a little brett, and a touch of vinegar came to the surface.

Very low carbonation which lends a smoothness to this sour beer. Drinkability isn't a strong point for this beer, but then again I don't think that the brewers intended this to be a session brew, but instead one that explores the limits of this style.

Conclusion: I think this beer is extreme, and will continue to draw extreme opinions from the people who drink it. Some will accuse it as the worst attempt at a sour of all time. Some will bow down to its outrageous flavors and interesting characteristics. I fall in the middle. I enjoyed it much, but didn't like the flavors at all. I appreciate the thought that the brewers put into it, and their interesting experimentation. I got to meet one of the assistant brewers, and he said that one of the yeast strains in the beer was harvested from a raspberry in a canyon where Colorado Springs locals spend time hiking and bouldering. What a cool idea...

a - Pours a dark mahogany brown color with one inch of off white head and low carbonation evident.

m - Medium body and very tart and aceiic, with low to moderate carbonation. Burns a bit and hard to get down a few ounces.

o - Poured myself about 5 ounces of this and it was about 3 ounces too much. This one is crazy tart and is like drinking vinegar; not something I'd seek out again.

Thanks to aussy13 for sharing this one at jmgrub’s tasting.

Pours a clear dark brown with a foamy tan head that fades to nothing. No lacing on this one. Smell is sour, tart, and funky with some fruity and slight vinegar aromas. Taste is very much the same with a super acidic and puckering finish. This beer has a lower level of carbonation with a slightly crisp mouthfeel. Overall, this is a very good sour with some great aromas and flavors.

Jesus Christ! I don't know if a fresher version would have been better (the label states it can be cellared indefinitely), but unless extremely intense vinegar and sourness is your thing, this beer has very little going for it. It certainly hasn't aged well. This is a tongue ripper with an abysmal feel to it. The aroma is the best thing and almost seems promising for a wild ale, but the taste just slams you with a mouth cringing twang.

Pours a cherrywood brown with no visible head, slight carbonation. Aroma of lacto, cherries, sour grapes and slight vinegar. Taste follows nose sweet and tart. Cherries up front with vinegar in the back. The sour sticks around and puckers well after the last sip. I love this beer, my only knock is I would like a little more carbonation.