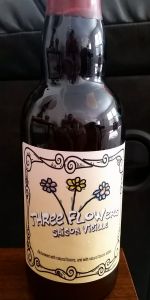 Notes: An Earth focused seasonal. We age this orange hued ale on the tips of three secret varieties of flowers. We promised not to give up our secret on this beer, because it's just too good! Authentically Belgian Style and only available as the weather warms and flowers begin to bloom.
View: Beers | Place Reviews
Reviews: 10 | Ratings: 63 | Log in to view all ratings and sort

Reviewed from notes. Poured from a 12.7 oz. waxed bottle into an El Catador Barrel-Aged glass.

A: A light gold beer that stays only slightly hazy - until you don't decant soon enough and pour off the trub. A fizzy one-finger white head fades fairly quickly. A good amount of visible carbonation.

T: Cracked wheat crackers, saison yeast. Less lemon but more black pepper than on the nose. Still some fruit yeast esters, but a touch of clove and phenols now too. Just a touch of pilsner malt character, and no real funk – just a bit of mustiness remains. It finishes with a touch of grassy hops under the dry attenuated hang.

M: A light body with low alcohol flavors. Tons of carbonation explode in the mouth, bordering on over-carbonated.

O: Forgettable – not sure what they tried to make here that would justify waxing a bottle. There’s a bit of vegetal flavors, but I'm left uncertain if there are actual flowers involved in the beer, or if that's just a name. A decent saison (though the carbonation does detract), but nothing that makes it interesting.

Had to do a little double take--no idea why the site says Trinity is located in Rhode Island. I bought this at the brewery in Colorado Springs, and the website makes no mention of their having a second location. The bottle says it was made in Co Springs, too. So I dunno.

Smells peppery with some really great, bursty yeast that's strongly reminiscent of Duvel and some of the better Unibroue beers.

Tastes like it smells: straightforward, yeasty and spicy. None of the floral nodes I was perhaps stupidly anticipating. Still, there's something about it that's just different, when compared to other saisons.

It's billed as a saison vielle, and the closest English definition I can find for "vielle" is "old." Crooked Stave makes a saison vielle that is barrel aged, so I guess this is the same? Maybe? It would make sense, because this has a taste to it that's different from any other saison I've ever had--it's still recognizably a saison, and the taste is pleasant, but I can't really place it.

A: The beer is crystal clear light yellow in color and has a moderate amount of visible carbonation. It poured with a two finger high bright white head that died down, leaving a thick collar around the edge of the glass and lots of lacing down the sides.
S: Moderate aromas of flowers are present in the nose—it's tough to pinpoint exactly what type of flowers were used but I seem to detect some Gerbera daisies. It's almost like smelling a fresh bouquet of flowers.
T: The taste follows the smell and has lots of floral flavors along with some subtle hints of sweetness. Neither spices nor yeast are noticeable.
M: It feels light- to medium-bodied on the palate and has a moderate amount of carbonation. No dryness is perceptible.
O: This is a light and easy to drink saison that could make for a good selection on a spring day.

"Three Flowers Farmhouse-Style Saison." "Bottle Number 2/131323." (I find this hard to believe since I just bought this casually off a shelf, but it looks handwritten.) 7.0% ABV per the label. 2013 vintage. 1 pint 9.3 fl oz brown glass bottle with yellow-grey (ecru for the pretentious) wax-ed over pry-off pressure cap and amateurish label acquired at a local CO bottle shop last week and served into a Belgian Independence Day stem-tulip in me parents' gaff in high altitude Castle Rock, Colorado. Reviewed live. Expectations are above average. Cost was something like $20.00 USD.

Pours a four finger wide head of white colour. Fairly thin. No real creaminess here. Complexion isn't all that soft, and the consistency is far from even. Head retention is good - about 7-8 minutes. No lacing clings to the sides of the glass as the head recedes.

Body colour is a clear slightly cloudy yellow of average vibrance. Appears adequately carbonated. I'm a bit surprised it isn't hazy given it's meant to be a farmhouse ale/saison. It's also a bit too clean looking for a traditional offering in the style; there's no visible yeast particles or sediment.

Overall, it's an appealing appearance in general for a beer, but doesn't quite fit stye conventions. I'm optimistic.

Sm: Clove honey, wheat, Belgian style pale malts, flowery notes, floral hop character, hints of biscuity brettanomyces with a light trace of meagre funkiness, ample malty sweetness, and clean barley. Seems a bit too sweet. For a purported saison, it's pretty lacking in terms of funkiness and spices. There are also no milky notes like you'd find in some of the best brews in the style (e.g. Saison Dupont).

I can't say I'm impressed overall. There isn't anything unique or special here, nor is it consistent with the best aromas I've experienced in the style. It's a pleasant aroma of mild strength.

No alcohol or off-notes are detectable.

T: Very flowery, but I don't pretend to be able to identify which flowers they used based on taste. There's also some floral hop character, but the two different flower tastes are quite distinct yet complementary. The body is a fairly predictable Belgian pale malt/clean barley build. I don't pick up much in terms of spicing, but I do find some generic clove/clove honey. Maybe some coriander. Nectary. Pollen-y. There is some biscuity yeast character as well as a touch of brettanomyces-induced funkiness, but the funkiness feels strange and unbecoming. Overall, I find it a bit too sweet, and the flowery notes don't feel particularly balanced to the rest of the flavour profile. I'm also not finding the lees mentioned on the label.

It's pleasant and enjoyable, sure, but there's nothing unique or special here. Not a gestalt build. Complexity and subtlety are below average for the style, as is depth of flavour. It's got the nuance of the flowery notes, but - while interesting - those notes aren't stellar. It's not a real intricate beer, especially considering the style. Compared to the best saisons, it's painfully simple. I do like it in a general sense and it hides its above average ABV well.

There are no off-notes per se.

Mf: Perfumey, lightly oily, smooth, and wet. It's strangely slick on the palate, and has a weird body. Presence on the palate is awkward; there's something about it I don't like that I can't quite put my finger on. Well-carbonated. Medium-bodied. The texture fits the flowery nectary vibe well, but overall it's far from stellar for the style. Good thickness. It's also somewhat soft, which I like.

Dr: A decent stab at a saison from Trinity, but overall it really misses the mark not only in terms of complexity and subtlety, but also in terms of the basics - where's the brettanomyces yeast presence? Why isn't there any real discernable spicing? I think it's an inspired attempt at a farmhouse beer, but I'm not convinced of the brewers' skill. I certainly wouldn't pay this price for this beer again, and there's no excuse given the best beers in the style are readily available for around $15.00 (see Fantome). I'll easily kill this bottle alone, but I wouldn't recommend it to friends and I remain unimpressed with Trinity. That said, it's above average - at least for an American attempt at the style.

Thanks to vurt for sharing this one.

Pours a murky light yellow with a foamy bone head that settles to wisps of film on top of the beer. Small dots of lace slowly drip into the remaining beer on the drink down. Smell is of malt, grain, floral, herbal, and spice aromas. Taste is much the same with floral and herbal flavors on the finish. There is a mild amount of yeast bitterness on the palate with each sip. This beer has a good level of carbonation with a crisp mouthfeel. Overall, this is a pretty good beer with some nice floral and herbal aromas and flavors.

a really brilliant spring saison, aged on three different flowers, but im not sure what they are. dandelion is probably one, and than something more like lavender, but its not real perfume heavy, so its hard to tell. the pour is pale yellow straw colored, hazy, with a robust two inches of almost see through white foam. the nose is sharp like French saison yeast, and a little fruity for being a flower beer. pears and melons tease me, but the pollenated floral essence is also there, as well as a slight funk profile that pulls me in. the flavor is a lot like the nose, although the acidic element is much more pronounced, and the flower power is a lot more subtle until the finish. notes of lemongrass and tropical fruit are also there, as the complexity of this beer is quite impressive. effervescent carbonation, light light body, just enough funk. this went great with a black and blue lamb burger, but would probably go well with anything. a little expensive at 16 bucks a bottle, but there really isn't anything else like this out there, so its worth it a least once. get it while you can.

Pours a slightly hazy golden yellow with one finger of white head.

The aroma is very flowery, lavendar, sage even a little bit like roses up front. This mixes together with some herbal hop aromas. Some spicy Belgian saison yeast in the background with pepper and cloves.

The taste is very well balanced, definitely more of the lavendar up front with some other less discernible flowery flavors, more like a bouquet of fresh cut flowers that doesn't have one dominant smell. Just enough spiciness from the yeast to cut through the flowery taste.

Overall this is an interesting saison, worth trying if you like the style but I probably won't be getting it again.

This was a very interesting beer with a very strong flower smell, like a lavender.

The beer was hazy and light in color and must have had at least a little wheat in the mash.

A flowery sweet taste went very well with the aroma that was present while drinking.

The beer had a medium body.

Aftertaste was a little bit of flowery/hoppy taste

A decent beer but not something I would want to have more than occasionally.

Pours a hazy tan with a nice tan head. Good lace and retention.

Taste is sweet, but well balanced by by herbal flowers, cloves and tropical fruits.


Three Flowers Saison from Trinity Brewing Company
Beer rating: 87 out of 100 with 63 ratings