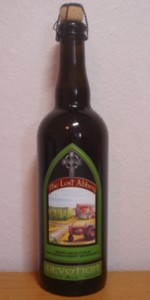 It’s an unassuming road leading to the priory. Here, off the corner of two intersecting roads, dedicated monks have been making beer for over 150 years. It’s always been a simple life — the kind that requires they brew only enough to sustain the activities of their monastery. In the silence of passing seasons, they pray, they brew and retire in solitary existence behind the sheltering walls. They live a most interesting life. Most likely one we couldn't sustain.

Nearby, each summer, the trellised fields spring to life as rows of resinous green cones are trained toward the heavens. Rumor is some monks love these hops and being surrounded by budding yellow aromas and the leafy pungent fields inspired them. Since we aren't sensible enough to locate our brewery near hop fields, we can only offer this blond ale in celebration of our Abbey brethren and their steadfast Devotion.

750ml bottle into a tall glass. NO freshness dating.

Kind of a barnyard aroma.

On tasting, initially feels smooth, even a touch sweet, but then the dry hopping comes crashing in making for a lasting bitter spiciness.

Overall, another Lost Abbey beer I'd rather have in a 375ml.

I'm always eager to try a brew with a cork top. This one did not disappoint. Poured a nice golden orange color. Smells light and grassy, like the field I imagined the hops grew in. The taste has that Belgian complexity: hints of grass, citrus, and a little spice and bread. The dry-hopped gets you on the back end but is pleasant and not harsh. And it goes down oh so easy. This is a delightful brew! Well balanced across the board.

Bright amber with a white cap and delicate lacing. Orange and lemon zest collide with rustic yeast, hay and white pepper in the nose. Taste has more grain and fruits, add pear, grapefruit, apple and tangerine to the nose fruits, slight sweetness too. Feel is crisp, dry, sneaky bready, clean and zesty. Great american take on the style, can't believe I hadn't had it yet!

Delicious blonde ale. Much lighter than your typical Belgian blonde ale, but as is, if not more, flavorful. Perfectly balanced, world class blonde ale.

I dusted off—quite literally—my Belgian Yard glass for this brew. Huge amounts of tight white head and very active carbonation, but it fit in the glass without having to wait too long for the head to drop off a bit.
Attractive gold colour and, for the first time this month, there were aroma hops present. The bottle mentions dry-hopping, and that came through in the taste; more with bitterness than hop flavour, I thought.
A decent, but not a memorable effort.

9-25-2019 - On tap and poured into standard pint glass at The Confessional in Cardiff-by-the-Sea. Babies are everywhere here. Family friendly atmosphere and great LA, THC, and Port options. Fun.

Poured from a 12 oz bottle. Golden yellow color with a small head, minimallacing down the glass. Lots of carbonation, but not fizzy. Really nice blend of malt and hops. Sweet tasting accent of lemongrass. Actually, delicious.

My bottle lists 6.25%. Huge just offwhite head with a golden look, somewhat of a chill haze fading while I watch it bubble. To my untrained nose, this thing smells sweet. Not getting much hopwise on the nose. Flavor is quite decent, now I get some hop bitterness(med/low) blending really well with the malt. I really like the gentle yet deep flavor and the prickly carbonation works well in concert with the flavor. It’s hard to peg down a good comparison for this one. I suggest trying it.

Today is Happy "Abbey, It's Veterans' Day on Sunday & I'm Lost!" "What's New, GEN Woody? Drink A Beer!" (Week 716)! I am excited to eradicate another from the Bottle Backlog.

From the Bottle: "It’s an unassuming road leading to the Abbey. Here, off the corner of two intersecting roads, dedicated monks have been making beer for over 150 years."; "This light, crisp, refreshing Blonde Ale was brewed in homage to those who have brewed before us, while maintaining that steadfast Devotion to their craft."; "Beginning with subtle hop character from the dry-hopping, followed by a thin layer of malt and notes of fresh hay and grassy fields with a nice dry finish, let our Devotion guide you on your journey."

I was entirely anxious to Pop! the cap on this one, given its glowing verbiage, but I also wanted to exercise restraint as lees had most likely formed since its bottling. Once again, an in-glass swirl was in order once I had the beer sufficiently decanted. My my, but this one really wanted to puff up! I got three-plus fingers of dense, foamy, rocky, yellowish-white head for my troubles. The lacing that remained was magnifique. Colour was a rich Golden-Amber (SRM = > 5, < 7) with NE-quality clarity, causing The Gelt Gang to sit up & take notice. J'aime les Belgies! Dies ist kein Lager! Shaddup, Fritz! This is Veterans Day & if I wanna pay homage to the English, French & Belgians, I will! Nose had a faint mustiness from the yeast, reinforcing my decision not to disturb the lees. Mouthfeel was medium-to-full, not quite creamy, but on the approach. The taste was evocative of a Noble hopped Lager, very grassy & hay-like. Mmm. Maybe Fritz has a place at the table after all … The more that I cogitated on this one, the more convinced I became that if you like German or Czech Pilsners, you will really dig this one! NOT a Lager, but an Ale that is a close cousin. Speaking of cousins, maybe I'll reach out to Colby today. He is VP at Ballast Point & his late father was a retired Navy aviator. The finish was dry, but not so dry as to be off-putting. I enjoy dry, hoppy beers so this was in my wheelhouse. YMMV.

Look: Crystal clear gold with slightly more than a finger of white head.

Taste: Surprisingly bitter, more like an IPA. Hard to pick out other flavors past the bitterness.

Overall: While it’s intended to be similar to Westvleteren Blonde, the original monk beer is far less bitter and more complex. This goes too heavy on the hops.

Poured from a 12 oz bottle into an Accomplice IPA glass

T/F: Follows the nose. Crackery grains... Belgian yeast and esters. Grass/hay, light spice, and lemon citrus. Starts out with some fruity sweetness and balanced out by bittering hops. Light bodied.

Kind of mad had this in the fridge for a while paid $3.50 and the place I got it from has them for $1.50 now so I know it may be too old. Into a pint glass.
A - Still come carbonation a good sign beer itself is a yellow amber color with a ton of floaties in the glass.
S - Some sweetness a touch of herbal hops and maybe a touch of grain. It still smells rather good.
T - Still a rather tasty blonde smooth bittering hops and a nice sweet finish. Grains in check it's still worth the price for the single!
M - Quite smooth light to medium was able to drink half the glass within this review.

Overall would love to try this fresh but I see the hype a very smooth blonde/pale ale!