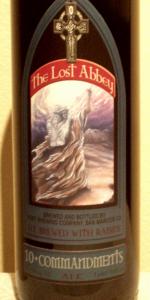 Notes: A stronger version of our Lost and Found Abbey Ale brewed to a more contemplative alcohol content. Massive in every stretch of the brewing way possible this is the sort of beer that will remind a beer drinker who considers themselves a saint that even saints stray as sinners from time to time.
View: More Beers | Place Reviews
Recent ratings and reviews. | Log in to view more ratings + sorting options.
2.84 by Dbot from Delaware on Dec 18, 2020
4.13 by JakerLou from New Hampshire on May 18, 2020

A little more sour and a little less deep than other beers by this amazing brewery.

August 2018 (2013 bottle) - pours a haze murky brown into a snifter with a very thin khaki head. Definitely aged well here (not sure who aged it but got it aged from Tavour so expect it to be proper). Smells a bit boozy with dark fruits and sugary goodness. Taste is well balanced with brown sugar, molasses, dark fruits and figs. Incredible smoothly and lightly carbonated. A super drinkable 10% beer here which was incredible.

Dark mahogany body with a thin yet lasting head, dense and creamy; big sheets of foam coating the glass. Big fruity aroma; plums and raisins. Huge flavors; dark malt with cocoa; plums and raisin as suggested by the aroma; light bitterness and minimal alcohol presence (although it grows a bit towards the end of the sip). Heavy body; smooth and velvety; a semi-sweet finish.

I am not sure which version of the beer this is. It comes in at 10.0% ABV per the label (and not the 12.0% currently displayed on BA) while the brewery's web site indicates the beer comes in at 11% ABV. Regardless, this is one finely crafted strong ale. It is dark and inviting with a heavenly fruity aroma. The taste is deep and complex with very little alcohol presence. A truly outstanding beer...

Drinking the 2013 version in 2018 really exceeded my expectations. Few beers gain anything past a year of cellaring and can diminish in quality. This was not the case. The deep brown blend with a whitish khaki head really demonstrated just how valuable cellaring can be. The sweetness was subdued. The flavors predominantly prune and raisin. A pleasant alcohol presence ended with a mild bitterness. Everything so cohesive and balanced. I don't know how this beer started but the bottle I got was close, after 5 years, to perfect.

2014 vintage; brewed with honey, raisins, and rosemary. This held up amazingly well. Incredibly bready in the aroma and the rosemary still came through surprisingly strong in both aroma and flavor. Not overly sweet, but a decadent treat nonetheless.

Notes via steam of consciousness: A creamy tan head rests gently atop a very dark brown - almost black - body. The aroma is sweetish and fruity with candy sugar, light brown sugar, almost burnt white sugar, raisins, prune, and fig. I'm gonna guess that the flavor is pretty much exactly the same so let's see... yep, pretty much exactly. Of course there's some bitterness as well, and it's not as sugary as the aroma suggests anyway. The fruit is nice with lots of bitter dark skin character and lots of dense fruit. It made me think of a port wine. It's not as rich, but hey, it's pretty close! I'm also getting a bit of spice, not sure if that's from hops or alcohol, but there's also some leafy, and maybe lightly herbal hop flavors towards the swallow and in to the finish. It's very supple and smooth with a dextrin rich medium body but the very fine bubbled, seemingly natural carbonation gives it a little bristle and bite. Hmmm, I think the alcohol gives it a little snap as well, and there's definitely some warming in the finish once you get a few sips in. As it's warming it's opening up and I'm finding some cocoa-like notes and a little bit of toastiness. It's grainy as well. Looking back the head has fallen to a very thin, broken in spots, surface covering and only minor lacing has been left behind. Was this glass "beer clean"? That might be my fault, I'm not sure. So, what's missing? The Brett. There's a very little bit, just a little sharpness that's almost like something metallic and some leather. If you're not familiar with it you won't be able to find it, it's very light. And that's OK, there's a lot going on here already... more herbal notes and some orange-like citrus have appeared to round it out a bit, and maybe even a note of molasses. I initially thought that it was a touch bitter with maybe too much alcohol but as it's warmed it appears more balanced, the way it should be, and again, that's OK because this is really a sipper. It's a beer that you take your time with, certainly not something that you drink by the pint at a party or pub, although I have seen similar instances of that and it usually doesn't end up pretty. So, did I miss anything? And where do I stand on this? Well I think it's really well put together. If there are spices added I really can't tell, which is something I appreciate about Belgian beers whereas American brewers are often more heavy handed and want everything to pop right out at you. Regarding the alcohol... how strong is this? 10% ABV? I kind of expect some alcohol at that level, and if I didn't get any I'd be a little disappointed, and probably feel it was missing something because it does add to the overall character. Still, it might be just a slight touch high. The malt is great, nice blend, and the yeast has clearly done it's job of adding character. I like it a lot, and I'd say it rivals even some of the best from Belgium. Well worth trying.

Poured from a bomber into a tulip glass. Very dark brown color with a nice beige head and lacing. Strong smell of raisin and prunes. Taste of these spiced with nutmeg, cinnamon, and orange peel. A bit boozey but tasty.

Pours a dark brown, opaque, with about a one inch head and a good amount of lacing, active carbonation. Smell is malt, Belgian yeast, raisins. caramel. some cola, light cherries and chocolate, light black pepper as it warms, spices- a little savory aroma. The taste also leads with the malt, then stronger chocolate than the nose, raisins, some figs, some caramel, dates, spices- the rosemary is more definable as it warms. Smooth, creamy, well carbonated, pretty full bodied for the style, alcohol well hidden.

Good flavor and aroma, a very good BSDA, but the rosemary and honey really don't show. And the rosemary is part of the allure. Well worth trying, but the price point is a little high for what you get.