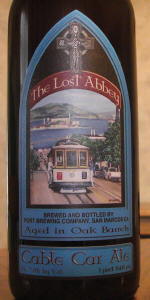 Pours a clean straw. Nose of white wine, somewhat jammy (cherry, strawberry?), Funk and barnyard, and honey as it warms. Taste of funk, jammy characteristics, vinous. Feel is light with medium carb. Overall, wow! What an excellent wild and held up very well.

I assumed this beer wouldn’t live up - but it was great. Not too sour, complex with some interesting wine character, went well with Portillos Italian beef!

Clear straw and slightly golden with a little carbonation and no real head.

The taste is All sour, fresh but light lacto with Cantillion like oak and dusty cellar. Continues with fresh harvested apples and white grapes.

T: Initial bright refreshing champagne-like start, it’s a split second of silence as your taste buds reset. As you wait for it, a smooth transition of flavors move towards the rear and to the sides of your tongue as your saliva glands get seduced. Flavors of sour cherries, nectarines, kumquats, apricots and plum emerge and give way to more complex flavors of oak, black pepper and tobacco as it stimulates your salivary glands, drying your mouth and making you thirst for more.

O: One of the smoothest sours I have ever tasted! People celebrate with champagne, if this bubbled like champagne, this would replace champagne. This is delish! If a sour is a sour, this is a refined sour. This is a well cellared vintage sour ready to drink at its peak!

Appearance: 4 - a bit paler than I'd like. Nice fluffy head, but the color isn't terribly bright.

Nose: 4 - I'm expecting this to be like Russian River Beatification or SARA Saison Bernice. Those are masterpieces, somehow producing flavors without any added fruit or adjuncts. Nose is just funk.

Taste: 5 - exactly! Same vein as the two I mentioned, but this is even better. I'm actually amazed at the amount of flavor they've extracted.

Overall: 5 - I didn't expect this to blow my mind, but it did. This one is in honor of those who fell to ensure our freedom.

October 16th, 2015 - This 2014 Cable Car is nothing short of a work of art. A gorgeous rich blonde color, the experience starts with the aroma. Oh sweet, heavily ambrosia. Real vanilla and custard on the top, followed by a ginger note, then braised pear. The bouquet continues with clove, all-spice and a dash of saffron, and finally a cooling aroma of oatmeal. The flavor definitely distinguishes this beer as a sour ale, but the balance between acidity and other flavors is masterful. A long saffron taste pairs with the sourness and is followed by a lemon zest aftertaste. Between sips my mouth warmths with the taste of shortbread, but that breaks with each sip as well, as muscat grape cleanses the palate to make way for each new round of the complex flavors. Truly an exceptional brew.

2018 bottle on site at Toronado. I think it was worth every penny and if you’re on the fence and reading this, just get it! This definitely holds up to the current state of American Wild ales in 2019 and I don’t think this is overhyped or whatever. It’s a truly special beer and a treat to enjoy.

2018 vintage, drank 8/1/2019. Pours orange with a bit of suspended matter. Tons of funk to the nose and taste. Quite sour and acetic. I for some reason had been expecting a kriek - but this is quite good all the same. I'd love to try an aged bottle.

Bomber from tornado lightly chilled
Cork pops like bubbly
Pours a clear gold with nice white foamy head
Smells like chardonnay.
There is a funky grape juice aroma.
Head dissipates quickly.
Taste explodes in my mouth. More funky grape. It starts sweet, but ends dry. The beer has a nice body and is not too heavy or cloying..
Not tasting the wood from the barrel.
Creamy buttery chardonnay comes through in the end in a good way. I am glad I tried it and enjoy it, but do not need to spend $80 again for it.

Poured into a tulip glass. Avery clear golden color with a medium white head. Aroma was as white wine, lemon, and stone fruit. The taste followed with a tart cherry flavor and floral notes. A clean dry backbone. Overall a fantastic beer.

At last, I got to try this one. The hallmark of this one is the complexity. There are layers upon layers of sour fruit, wood, mineral earthiness, dank funk, and acidic fruits. The smell is a fruity horse blanket, with plenty of musk and funk to go around. Carbonation is a little high, but otherwise wonderful in the feel until the very acidic finish, bring the tums. A well made beer that stands the test of time

05/2016 - 2014 vintage - No effs given about the price for on-site consumption as this beer is truly complex, multi-layered, and beautiful. Semi-sweet, oak, funky, nice tartness; balanced.

Saw that Toronado would be tapping this gem Thursday earlier in the week as part of Toronado’s 10th anniversary and things worked out where I could sneak over from work after lunch. Had no idea of the price until I paid. Really didn’t know the size of the glass either, initially thinking eight ounces then later thinking six. Either way, this beer was supposed to be a stud, coming in at No. 55 all-time on Beer Advocate. Scanning the QR code on their website after the fact, it read, “Good luck! We produced this limited release barrel aged sour blended beer for the 20th anniversary of the Toronado in San Francisco. A whopping 35 cases were made.”

Poured a golden clear color with 1-to-2 fingers of frothy off-white head when I got it. Some bubbles creeping up from the bottom of the glass. World-class spotty lacing. World-class retention. Really great looking beer for a sour. (Sight - 4.50)

About as good as I hoped, although I feel like I overrated it slightly. (Overall - 4.50)

Smell-citrus and Apple and some oak. Not overly complex but really enjoyable

Taste-green apple is very strong, oak, I'm guessing this is a WINE oak barrel. Some nice citrus under the main coat of green apple

Overall-amazing. Glad I pulled the trigger on this one

2013 bottle poured in a DDG teku. Semi hazy golden color. Smells of funk, subtle vinegar. Taste is amazing...insanely balanced. Perfect tartness....super drinkable. Excellent carb. Overall an outstanding beer that lived up to the hype for me.

A great beer indeed, one of the most balanced wild's I've ever tasted. Worth breaking out the big guns to trade for it.

Pours a brighter golden-yellow color with a small, yet stable white head.

Offers a mineralic apple sweetness, which gets balanced by old cheese, cellar funk and a lovely hay softness. Atop of this settles lime zest, making this quite sour on the nose, together with lots of old leather and some malt sweetened moldy woodbark. This is definitely more funky than acidic with an unforseen richness of aromas, due to the well enveaved malt sweetness, amping everything else up by a few notches.

Unusually full bodied for a sour beer with lots of flavors battering down the palate at the same time, soothed by a mineralic effervescence. This brings a stony quality to the palate, making this highly refreshing, while never loosing its true goal, of creating a multi layered sourness.

Yupp this is sour, not your typical AWA in-your-face acidity, but a very well nuanced, matured and balanced tartness. This comes along with blue cheese, dried mushrooms, green apple peel, tangerine pulp and a note of spiced cucumber. After this first impression, the beer settles down a little, allowing sweet wheat and a subtle note of toffee to cut through, enriching but mellowing the omnipotent sourness at the same time. There is even more funk after the swallow, now accompanied by a bright mineralic effervescence, pushing the sourness a bit more into the background, unfolding old cream cheese and dried garden herbs. Finishes almost calm, aqueous with a lingering apple-lemon tartness and soft, sunbathed wheat.

Stunning. This beer wants to get discovered slow and carefully, since it simply needs time to adjust to the offered complexity. It is a very rewarding process though, exhibiting the most perfect unfruited AWA I've had so far. The beer hits every mark you could expect from a world class sour, so sit back and enjoy the ride.

One rating down due to supply and demand. No distribution but in-house consumption only. I managed to be one of the luckiest to be able to take one home. Best one so far.

2016 vintage. Had on draft at Lost Abbey 10th Anniversary party, May 21, 2016. Writing review on notes I took that day.
L: golden color, ever-so-slightly cloudy, big white foamy head
S: somewhat muted at first since I was drinking this outside, but as it warmed and I went inside the aroma really shined through. Lemon, peach, apricot, pear, funk minor white grape. The funkiness was singular and one I had never smelled before. Very enjoyable aroma!
T: Taste was great also. Lemon and stone fruits were the headliners here along with that uncommon and nice funkiness.
F: Mouthburst was subtle and not sharp at the end, so it was nice-drinking throughout.
O: It was difficult to finally grab this, especially without having to pay the Toronado prices, but it was well worth the effort! One of my all time favorite sours, easily! Very high class!

Right in line with some of the best sours out there. Great taste and feel, but didn't get an outstanding smell from it. Nothing bad, just didn't blow my socks off. Overall, very glad to have tried this one out.

This is worth all of the hype. I bought a vintage 2008 bottle about a month ago when I was at Toronado in SF, and I was not disappointed. For an 8 year old beer, this was incredible complex.

What a great surprise to get to try this at Toronado during Duck Days of Summer. 2016 Vintage. Poured into a goblet, it is a beautiful golden/orange color with a slight haze, and 1 finger of head. Smells was most stone fruit, peaches, apricots, a bit of lemon. Big creamy body with the right amount of dryness, acidity (mild), and tart & funk. I know they price point turns some folks off, but I considered this a treat and a beer I'd probably never have again so $60 seemed well worth it to me. If I do get another chance to drink this again, I won't hesitate.

Not a big sour person, but there beer was very enjoyable. Great hazy orange color and look. Flavor was smooth with more funk than sour for me. Could actually enjoy this very often. 2016 vintage

Slightly overrated (especially for what it costs!), but it's still a fantastic beer. I actually found Duck Duck Gooze to be vastly superior to this one.