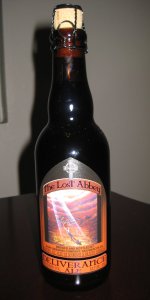 Notes: Cue the banjos...A blend of Bourbon Barrel Aged Imperial Stout and Brandy Barrel Aged Barleywine. One of our highest and most sought after non sour aged releases.
View: Beers | Place Reviews
Reviews: 468 | Ratings: 2,019 | Log in to view all ratings and sort
Reviews by GreggB:

A: 4.25 Pours thick and pitch black. Not much head (maybe half an inch) and it only lasts about a minute.

S: 4.5 Initially, there’s a lot more brandy than bourbon on the nose, bringing a huge amount of vanilla. The stout aromas come in close behind with a lot of chocolate and some roasted malt and berries. It’s really interesting how the chocolate and the brandy both dominate, while at the same time take turns up front.

T: 4.25 Similar to the nose, however, it’s a bit less balanced. Again, there’s lots of brandy and vanilla followed closely by the chocolate, roasted malt, black licorice, and a bit of coffee. With the vanilla, the brandy brings along some fruity, cherry flavors while the bourbon and stout seem to add a bit more raisin and cinnamon. Quite sweet at first with a slightly bitter finish.

M: 4.25 The thickness is great. It’s very rich considering it’s a blend of a stout and what’s essentially a barleywine, but there could be a bit more carbonation.

O: 4.25 This is a very interesting beer and a nice job of blending here. Some aspects are top notch, but the flavors could be a bit more integrated. Sometimes sips are quite brandy forward while others are more chocolate and bourbon forward. I prefer the latter, so hopefully a bit of time in the cellar will result in a more balanced flavor.

O - Very memorable and in a good way.

Nice dark brown/black color with a dark red/brown tint on the edges. Smell is HUGE bourbon sweetness with hints of brandy. Flavor is big on the bourbon (almost BCBS-like, with a tad less fruitiness) with some dark fruit and chocolate notes on the finish. Alcohol is detectable, but not hot. Mouthfeel is medium to medium heavy with a some light carbonation. Still pricey for $15, but it's a nice treat. I'd happily pick this up again.

Pours dark, opaque, thick looking. No head, little lacing. Smell is great- bourbon, a little brandy, malts, some cherries, vanilla, oak. Taste continues the bourbon- although the brandy has dropped out. Maybe a hint of it on the back end at room temp. Also malts, vanilla, oak, plums, a little bit of chocolate. Pretty boozy for a year or so. Good body, a definite tongue coater.

This is really good and I'm giving it a high rating, but for some reason I was expecting more out of this. Certainly worth a try, but- and this is a bigger "but" than I usually give, the price point is really high for what you get.

Bottle from nerd...thanks man!! Poured from a 375ml cork and caged bottle into my Portsmouth snifter/tulip glass. Pours a very dark brownish-black color, with just the smallest hint of mahogany. Appears to have little carbonation, as a very small dark tan head forms. Head is creamy, and when it dissipates, it remains as a very smooth surface of cream. Leaves a quick sliding fizzy lace. Overall, a very nice and inviting looking beer!

Aroma is right where I expected it. Brandy, bourbon, chocolate, coffee, toasted malts, and molasses.

Very tasty! Huge warmth from the mixture in the brandy and bourbon. Big chocolate/coffee notes. The full body comes in very, very sweet...with the booze warmth attacking the second it hits your lips. The beer finishes as delicious and sweet as it starts. This beer is excellent! Tomme continues to make some of the best barrel aged beers around. Just wish there was more of this produced...because I bet this beer will age with the best of them! Carbonation is low, but there...and doesn't hurt the beer one bit. Booze is high, and drinkability is surprisingly high for such a full body beer.

A: Pours very dark brown, though lighter at the edges, with a cap of beige head. So-so retention and almost no lacing.

O: Really nice complexity and integration, with layers of interesting flavors which change as the beer warms. Although I didn't really detect bourbon. As enjoyable as this was, I think I'd prefer Angel's Share straight up.

Poured from a bottle into a Chimay goblet.

Appearance: Pours a very dark mahogany/black color with some light coming through and giving the edges a reddish tint. There was a super thin layer of tan head that went away almost immediately.

Smell: Very sweet with the bourbon and brandy hitting the nose right off the bat. Strong notes of caramel and dark fruit with more subtle vanilla and chocolate notes in the background.

Taste: Initially this beer is quite sweet with hints of chocolate, vanilla, and caramel. The bourbon and brandy show up along with some dark fruit and maple. The alcohol and sweetness combine to carry you to the finish along with some roast. Everything blends together quite well.

Mouthfeel: This beer has a thick body and covers your mouth completely. The carbonation is very mild, perhaps it could use a touch more, but not a lot by any means. The finish is sticky and a bit slick.

Overall: This beer was a joy to drink. I just love the taste. I would definitely like more if we aren't all raptured out of here.

Very solid non sour. Boubon Barrel Aged so has a strong flavor to it. Tastes of figs and raisins with chocholate as well. A very solid beer and worth trying.

The bottle presentation itself is pretty impressive and the beer that follows does not let you down. By the way that's my pic:)

A-Pretty dark but the Angel's Share lightened it up a bit. Dark head that fades quickly and some nice lacing.

S-Wow! This is exactly what I expected. This is a big beer with a big nose! The brandy and bourbon blend nicely without overpowering each other. There's alcohol, dark fruits, barrel.

T-First you get the blended brandy and bourbon so it's sweet but not overpowering. The brandy is very present. Dark fruits, vanilla, oak and brown sugar. The alcohol comes into play heavily at the end, I can't wait to try this in another 6 months.

M-Luscious! It's full bodied, smooth,and nicely CARBONATED. Not nearly as heavy as you'd think and pretty easy drinking for a 12.5% beer.