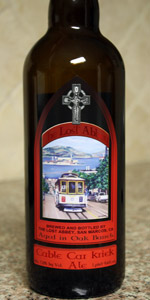 SO EXCITED to try this beer. I walked into SD Toronado (the SUPERIOR Toronado of the two) while I was on my birthday vacation and was shocked to see this sitting in the cooler. Yes, it was SITTING IN THE COOLER...for all to see. No asking the bartenders if they have it just to let them decide if they like you enough to serve it to you. This Toronado does it how it should be. Such great service, outstanding food, and great beer selection. Back to the Kriek,..it poured a lot less "pink" than I thought it would be. It was a clouded, light-red color with an off-white head. Scent is very cherry-forward with some definite barnyard and musty aromas. The smell is so darn inviting, I can't help but take few sips of this beer immediately. The cherry is so profound in this beer, more than I expected. A good amount of oak and funk. Not overly acidic whatsoever...in fact, not very acidic at all. Just a clean, funky, fruity, wild ale. Mouthfeel is medium bodied, almost puckering, with a juicy finish. Sour and juicy equals amazing in my book. Drinkability is VERY HIGH. Overall, this beer was worth every penny I spent on it. I went into the night willing to spend $80 on the bottle, just to find out it was $55. So worth it. A phenomenal wild ale.

Thanks to Mike and Josh for this one. A long time want and one I thought I'd have to eventually travel to CA for. Much appreciated. 4oz. pour into a Lost Abbey teku.

Pours a .5 finger pink, frothy head with average retention. Beer is a slightly cloudy stunning pink orange. Lacing is spotty and sparse with some stringiness and thin legs. Average save for the really pretty color.

Light to medium bodied with ample carbonation. Dry in the mouth and puckering going down. Very refreshing. Sticky and dry finish with a messy and lingering aftertaste. Nearly perfect.

I thought Cable Car was a slightly above average American Wild but this is a completely different animal. The addition of cherries has given this beer a whole new dimension and makes it clearly one of the best in the style. Definitely worth the hype.

Brown glass bottle served into a wine glass at the Toronado in San Diego. Paid out the ass for this (I think it around $50.00). If there's a beer to shell this much out for, certainly this is it. (Or at least one of them; see my Narke Kaggen Stormaktsporter review). Reviewed from notes taken in October 2012.

A: Pours a half finger delicate beige head of good lacing, nice thickness, and brief but appreciable retention. Colour is a pale peach-red. Nontransparent; non-opaque. No yeast particles are visible. No bubble show. Has the appeal of a masterful red wine or bourbon. Classy and understated. I can't wait to try it.

T: Sour, with some serious bacterial notes on the back end. Incredibly crisp like fresh red apple yet outfitted with a wonderful solid cherry body. Refreshing and clean, yet lightly vinegary and even subtly wine-esque. I get the wood, but it's subtle and understated in the background. Rich and smcak-your-lips flavorful. Incredibly tasty stuff. Masterfully complex and balanced. No alcohol is detectable. So fresh and luscious. The lingering long aftertaste helps me enjoy it for longer. I get cherrywood as well as oak. Some pear. Green apple. It's got all the sourness I could ever want, but the perfect amount without feeling tamed. Not at all overdone. Clean malts lend it body but don't intrude, letting the sourness shine through. It has an incredible amount of body for a kriek, almost like a fine French cider. I'm blown away. Marvelously built. Nicely acidic, as well. Tartness is supreme.

Mf: Crisp, full, and of perfect thickness. Smack-your-lips delightful. Smooth and wet, letting the flavour speak for itself. Suits the flavour profile quite well.

Dr: An incredible kriek. Lives up to the hype, definitely. Worth the price for a special occasion. Another remarkable sour from Lost Abbey. I'd love to have this again (or the regular Cable Car, for that matter). The mouthfeel isn't perfect; it lacks the fragile delicacy I'd expect in a masterful sour - but it's still lovely. Few sours I've had have such presence and flavour. The depth of flavour and layers of mastery burgeon throughout. I detect at least five distinct acts in the structure: the sweet, clean open; the initial sour apple and hints of bacteria; the middling bacteria sourness blast; the fading cidery sharp climax with hints of lightly spicy yeast and cherry abound; and the lightly dry fruit cherry skin finnish. Remarkable. Wow.

Reviewing a bottle of the test batch for Cable Car Kriek from The Lost Abbey out of San Marcos, California. Major thanks to Paul and Jonathan for sharing this rare treat with me!

The only thing I know about the bottling date of this beer is that it predates the 2011 release of Cable Car Kriek. My buddy got a Cable Car Kriek label sticker, which he put on the otherwise unmarked bottle. Served in a Cantillon stemmed balloon glass and enjoyed on 11/16/13. Review is from iPhone notes.

Appearance: Pours a finger-plus of white frothy head. Color is a murky red-orange color with a bit of yellow-orange fade towards the edges of the body when held up to light. Excellent lacing and retention. 5/5

Smell: Cherry, then dank cinnamon, funk, wood, dank spice, fig, raisin, wood and lemon. Hint of tobacco and vanilla. Lots of unexpected cinnamon present in the nose, which is ridiculously complex and perfectly balanced between all the elements present. Just enough funk is present to give it an added dimension of complexity without detracting at all from the appeal of the other aromatics. 5/5

Taste: Tart cherry hits first, then cinnamon, spice, vanilla and wood. Musty funk on the midpalate, oddly reminisce of that Cantillon house character with a little bit of age. Vanilla and cherrywood finish, light lemon backbone. Dark cherry notes and a little bit of cocoa-like flavor come through too as the beer warms up. The cherry flavor persists throughout, and lingers nicely in the finish. I love how well the vanilla flavor plays with sour characters without being medicinal or coming across as being out of place. All the flavors here are so perfectly integrated. There is so much going on, and it all works. The cinnamon character is a nice unique twist, though it is less prominent on the palate than it was in the nose. 5/5

Mouthfeel: Medium bodied, spot on carbonation (rare for a Lost Abbey beer). Great mix of sweet and sour, with a dry finish. 5/5

Overall: One of the best beers I have ever had the pleasure to consume. It is complex, robust in flavor, tart, balanced and insanely drinkable. There is a reason this is one of the most sought after beers out there. I would not say it is worth the $600-800 it commands on the secondary market, but I enjoyed it more than M, which costs much more to acquire. My only quip here is that someone stole the bottle from Paul later in the evening. Seek this one out with confidence.

Bottle pour at Woodshop 8 held at The Hermosillo in Los Angeles, CA.

Pours a murky reddish-brown with a foamy beige head that settles to wisps of film on top of the beer. Small dots of lace form around the glass on the drink down. Smell is sour and tart with malt, cherry, and wood aromas. Taste is much the same with sweet and sour cherry flavors on the finish. There is a mild amount of woody bitterness on the palate with each sip. This beer has a good level of carbonation with a crisp mouthfeel. Overall, this is a very good beer with a fantastic balance of sweet and sour cherry flavors that make this one a real treat to drink.

Big thanks to Josh(jbuddle) for opening this.

A- reddish pink with a beautiful haze and a soft pillow of white, cloud like head.

T- a depth of cherry flavor, both sweet and sour cherry. great oakiness is coming through from sip to finish. sour fruit with a suttle sweetness. mmm this is good.

O- this one gets best in style IMO. by far the best kriek i have had.