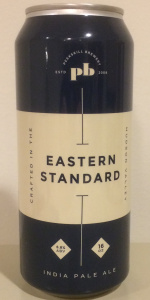 Notes: A true classic, our IPA holds nothing back. Packed with Citra and Simcoe hops from the Pacific Northwest and just enough malt for balance. Keep cold, drink fresh, and share with friends.
View: More Beers | Place Reviews
Recent ratings and reviews. | Log in to view more ratings + sorting options.
Rated: 3.5 by Ctowner1 from New York

Taste: A bit of caramel sweetness on the front end with the citrus and pine emerging to dominate; moderate bitterness, from the middle to the finish with just a hint of aspirin

Overall: A nice straightforward IPA in the West Coast style

4.34/5  rDev +5.3%
look: 4.25 | smell: 4 | taste: 4.5 | feel: 4.25 | overall: 4.5
Always on tap at a few local bars.
Good looking glass, clear golden amber with steady carbonation and a firm, white head that hangs in every time.
Aromas of pine and spruce, candied tangerines and cracked grain. Eastern Standard screams West Coast style.
The flavor is balanced and delicious - great blend of malt toffee and fruity, earthy hop with a tangy, grassy bite mid swallow through the finish.
Medium body, terrific balance and malt character, complex hop notes of conifer and citrus with a moderate abv and long, satisfying hoppy aftertaste.
This is one of my area of NY's best straight up IPA's IMHO and very awesome to see it and other local beers becoming so popular even in 1/2 filled bars.

Bright citrusy and floral aromas dominate the nose alongside a hint of bready grain. Fruity aromas of peach and apricot compliment things.

An old school IPA that is nothing less than all around. It is pretty damn tasty and quaffable to boot.

4.07/5  rDev -1.2%
look: 3.75 | smell: 4.25 | taste: 4 | feel: 4.25 | overall: 4
Decanted from a 12 oz (355 ml) can into a conical pint glass; canned 06/15/18 and purchased at the brewery.
A: Pours a cloudy, dark goldencolor with limited head formation leaving a one to two finger, chiffon head with patchy retention but rings of lacing.
S: Aromas of white grapefruit, pitted fruits and mango mix with subtle grain and grassy notes.
T: More semisweet than semidry. Definitely citrus and resiny flavors predominate over the light and caramel malts. Light bitterness.
M: Light to medium bodied with moderate, albeit persistent carbonation. Slick on the palate.
O: This is a light, refreshing IPA, more on the “Mid-Atlantic” style, but with very strong, but balanced bitterness. Very enjoyable.

Lemony and herbally bitter hop nose, with a whiff of cracker-like malt.

A bit more complex hop flavor in the taste than in the nose. It's still bitter and hetbal, but with a bit more citrusy depth to it. It remains pithy throughout and finishes with a dry zap.

Medium bodied with a slightly crisp yet resiny mouthfeel.

Definitely not a NE IPA, this is a bit more sharp on the palate, but I'm okay with that, as it's the type of IPA I've been drinking for a long time. More herbal than a lot of PNW IPAs, it's got enough citrus flavor to balance it out. I don't think age has been much, if any, factor with this beer and would happily drink it again. Thanks, Brian.

Look is a pale hazy yellow with a frothy white head.

Aroma is a nice light lemon with a biscuit malt undertone.

Tast is an explosion of hops, huge consentration of lemon and herbs hops.

Rated by morky92 from New York