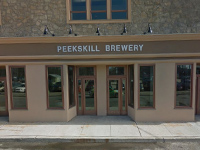 Rated by AlpacaAlpaca from New York

Reviewed by Johncnh from New Hampshire

3.69/5  rDev -11.5%
vibe: 4 | quality: 3.75 | service: 3.5 | selection: 3.75 | food: 3.5
Peekskill Brewery is located close to the Hudson and right off of Rt 202/9A. The facility has a large serving area with sixteen taps, pretty much all of which are in use, including 4 dedicated to guest drafts. The bar is long with seating for at least a dozen, while the remaining serving area has one to two dozen tables for two or four. A restaurant is located upstairs.

The vibe is low key, but lively; two large screen televisions provide were displaying baseball and track & field events. The staff were pleasant and fairly efficient. The food was palatable and the beers my spouse and I tried were enjoyable enough, if not. This would be a fun place to hang out or entertain friends.

Reviewed by BethanyB from New York

Here's the thing: the brewery, while still enjoyable, ended up being my least favorite part of Peekskill. It's a truly lovely waterfront town, with plenty of quaintness and curiosities to explore...and yet, its brewery, at least from the outside, looks like the planet of New Jersey dropped a chunk-of-a-strip-mall asteroid in the middle of a culturally educated version of Pleasantville.

Once inside, you get a tiny glimpse of the brewery through a narrow glass window, not unlike something you would find at a zoo's reptile house. And yet, considering the beyond bland facade, it's a nice reminder that "yes, you are in a brewery."

There is plenty of room at the bustling bar, and one automatically takes note of the exposed second floor where, according to the menu, astronomically-above-standard pub fare is served. The set-up pays off, as first-time clients down pints with the full intention of soon journeying to that delicious second floor, especially once giant, juicy burgers are delivered to a few fellow bar-dwellers.

The beer menu feels somewhat limited and lackluster, despite a colorful chalkboard menu displaying beers with fun, tongue-in-cheek titles. After ordering a flight, I was unsurprisingly unimpressed, but at the same time, I was hardly horrified. The beers, while unmemorable, were not without merit. They were steady and safe, but not at all worth the MetroNorth journey.

So yes, of course we trekked upstairs. A blurry-eyed first glance made the area seem almost chic, but an only slightly closer look revealed a both poor and lazy man's design plan: What really says it all were the hanging squares of canvas which had seemingly been wrapped in blue and red burlap by a bored twelve-year-old who then secured the misshapen "decorations" with a couple apathetic smacks of a staple gun.

Still, the staff, though poorly versed in beer, were friendly and responsive, and the food, while not quite worth all of our salivating, was solid.

I can say with certainty that I won't be back...at least not for the brewery. But cheers to the facility anyway: It certainly tries enough hard enough to keep the locals with limited options coming back.

Reviewed by nh2032 from New York

4.01/5  rDev -3.8%
vibe: 4 | quality: 4.25 | service: 3.75 | selection: 4 | food: 4
Rated after a couple visits spread out over a few years. They have been a through a few different brewers, but overall quality of the beer has remained pretty high. There is no denying it is a popular spot especially on weekends. Service can maybe suffer a bit as it gets busy, but between the downstairs taproom and upstairs offering you can hopefully find a vibe that works for you. Now that they are canning more often it provides another good excuse to stop in. Food is pretty good, but I've by no means tried it all.
Apr 26, 2017
Rated: 4.84 by Urk1127 from Pennsylvania

4.3/5  rDev +3.1%
vibe: 4 | quality: 4 | service: 5 | selection: 4 | food: 4.5
Located on the river and the brewery/restaurant is a two story open foyeur area - pretty cool! Sixteen taps and a nice selection of appetizers, salads, sandwiches/entrees. I had the Mac n' Cheese with bacon and was a meal within itself - very creamy with huge 1/2 cubed bacon chunks - NICE! The food is not cheap.

The beer was also very solid as we did a flight each between the three of us.

Reviewed by Ethanol4one from New York

Reviewed by hoppymcgee from Maine

Q: There are higher-quality breweries in NY.

S: Plenty of options, and very accommodating with growler fills.

Reviewed by Phigg1102 from New York

The restaurant definitely has an upscale feel and prices to correspond. But the food is pretty damn good. Peekskill beers that make it to NYC are always good and that was the case at the brewery, although on my visit, there weren't any standout seasonals, barrel-aged beers, cask or anything to get really excited about.

I'd give them a second visit certainly or drop in if ever riding the train up north because the train stops just steps away from the brewery and restaurant.

Reviewed by seanchai from Virginia

Reviewed by PA-Michigander from Pennsylvania

Rated by Macsimus from California