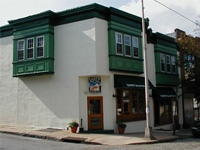 I was a huge fan of Tom's brews since Heavyweight started showing up on the shelves in MA. I had been looking forward to a visit here for years, and it did not disappoint.

Low-key rustic vibe to the place. Simple and modest. Our waitress was very friendly and attentive. She made sure to let us know about the happy hour deal, which brought their already-reasonable prices down to prices that almost made me feel like I was stealing. Only four house brews on tap, but they were great. An alt, saison, APA, and a milk stout. The alt was spot-on, and the saison had a lot of character. Milk stouts aren't really my thing, but this one was pretty good. And it was nice that the APA didn't give in too much to the NEIPA trend and stayed very drinkable. I had a mushroom pizza that was very good, though the truffle oil overpowered most of the impact the wild mushrooms could have had.

There are a lot of guest brews available, but with such wonderful house brews, I didn't venture into them. Even some brews from Tom's other place Bar Hygge/Brewery Techne are available here.

This is the type of place I would die for (die at?) to have in my neighborhood/town. A great relaxed place to go and drink some top-notch beers that are priced reasonably with good food and good company.

stopped in here for a couple beers and a snack on a Sunday afternoon. Only the upstairs was open so we sat at the small bar upstairs. There is a also a larger bar downstairs. Dining tables on both floors.

they have 4 of their beers on tap plus 7 more guest taps. Good variety.

We didn't have any flatbreads, just a cheese plate which was good. Bartender was friendly and service was good.

Two tiered places at different heights on the hill attached; this room holding a staircase to the other, a lower space. You’re greeted by the Collins Bar spun into place (I swear Broderick had a tear in his eye when I told him so). Laminate topped, panel base, & a foot bar; seating for 10 on hightop chairs. The barback with diamondish mirrored panels on wood panels, shelved glassware & wine, glass front cupboard pieces on the ends with old Heavyweight bottles, and red lights tonight. 12 tap barbell tower on the bar and a handpump on the front end. John, can I please get a shorty of the…

Glow light lined horizontal board listing taps, specials, sodas, wines, etc. up front and vintage world school maps over the bar. Step up walk around the sunken brew room to the rear. See Lynne & Leslie, and say hello to Baker mulling about down there. Barrels and pieces of beer bric a brac lining the ledge and a completed wine crate Death Star mounted on the wall above. Tiled floorings around the bar and wood slat below, spinnys and sunken spots. A bar counter space adjacent to the bar offering views of the kitchen prep area and igloo hearth where the magic happens. A few bar tables forward the bar and more seating below. The room’s done in yellow & a lot of green with great local art, and tall vertical windows up front that open over Germantown Ave.

And upstairs past the cool Philadelphiaings (maps and prints) in the stairwell. A smaller straight bar there, laminated wood topped, panel base, & foot bar wrapped; seating for 6 on hightop chairs (much nicer than the one we sledged out in its place). Panel wood barback wall with glassware shelved, and slight wines & boozings. A glowing globe in the corner and a lie down wine rack piece on the other end. Horizontal boards framed and glow rope lined above listing house drafts (name, style, ABV), and guest taps, events, & specials in alt colored chalk. 12 tap barbell tower on the bar and upright cylinders for local wines.

Stucco-y walls in yellow and the ceiling in purple, slat wood floors. More art of the same, some permanently painted pieces, and a ‘Wine grape varietal table’ print. Drop gold cylinder lamps over the bar and winding track spots. Spinny fans for the breeze and duct work above. Panel windows curtained to the front and side. Long shared tree hightop table off the bar and some shorty round & squares in the corner sharing some bench play. And then roughly two and a half dozen 2 & 4 people tables here & below; including the shared pew space in the mirrored disco room.

Now, for eats, the primary staple is the flatbread, and they do a bunch of ‘em. My standard is the ‘Seed’ (roasted garlic puree, pine nuts, pumpkin & sesame seeds, mozzarella, red pepper flakes) but sometimes I switch up with the likes of the Caveman or weekly special. But today, I’ve had this idea, see, where I would bastardize the already amazing Seed by adding a few more awesomeness things; namely pepperoni (latin for ‘of the pig’), and scallions (king of all onions). Witz suggested we instead get a small pepperoni, to which I agreed, but then he hurt me with his words by bagging the pepperoni and ordering the weekly special flatbread (whole grain mustard sauce, smoked pork belly, house made garlic pickles, & cheddar, topped with spinach & local honey) on the fly. To be fair, it did had a yum factor 9 to it. The flatbreads are the jam, but there are other goods to snacky snack on. I very much so dig the Wheatberry salad & Humus sampler, and let us not forget the dessert flatbreads.

Cool mural on the side of the building done by everyone’s favorite arborist. Great green house; sustainable practices and built from reclaimed goods. No TV’s, so you’ll have to converse with one another. Fantastic flatbreads, tasty, sometimes unusual styled beers, and the nicest people in beer, period.

Earth is great because they always have something new whether it's their beer, or their flatbreads. In my opinion, they have the best flatbreads and some of the best beers in Philly. They rarely repeat beer recipes, so they always keep it exciting that way. If you like a beer there so much that you can't live without it, get a growler for sure.

The wife and I were back in Philly, a bunch of weekends ago. We like Mt Airy/Germantown/Chestnut Hill/Fairmount/Whatever. There are not a lot of boundaries between all of these neighborhoods, but they are oh-so-beautiful, cozy, quaint, perfect for a chilly winter evening, morning, day.

We had tried once to stop at Earth Bread but it was closed. This time I did my homework and we went in on a Saturday afternoon before the crowds. Smallish place, we sat at the bar overlooking the pizza oven. There is also an upstairs section where families with babies were all headed.

I like breweries who have guest taps to complement their short lineups, and I like it even more when a brewery offers housemade sodas and kombucha! Yessss....

Not bad prices, five bucks for a 13-oz glass and $6.50 for 20 ounces. The food was disappointing, though. You read about their flatbreads and you can't help but expect some amazing yumminess. When it comes out, it is a soggy-mushy mess of an overwhelmed dough. Toppings had no flavor.

Bartender was nice, beers are fun, place is warm. I will come back, no doubt.