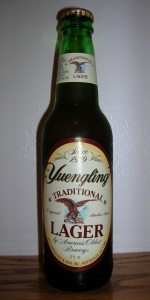 Refreshing and relatively sessionable, just not as flavorful as I hoped for. Still, if it truly is an original recipe I think it is good for the style. By all means at least give it a try.

I really enjoyed this beer, beautiful amber color. Really nice smell, smells of sweet malts and has a decent frothy head nothing spectacular. Lightly carbonated was a little upset with how light the carbonation was. Overall a solid beer . Definitely worth a try

absolutely influenced by my grandma's love of Yuengling, but this is easily the nicest beer that I'd be willing to buy for myself regularly. Nice taste, goes with everything, easily available. Big fan!

I spent many a night enthralled with yuengling.

"Premium at domestic prices" was the chant..
And it was correct for a time.

Unfortunately, that time has passed. Miller ruined the little I loved about yuengling. It tastes like shit. I have 5 of 6 16 oz cans of it in my fridge now I want to toss. BC I drank the first one and nearly puked.

Pours a deep dark amber in the glass, smell is faint, mainly grassy, malty, not too much of a hop smell coming from this. Taste is malt, grain, slightly sharp afterglow on the tongue, more body than many beers within this price point. Overall, a pretty good lager, notched slightly above the PBR, High Life, Bud, Coors, but within the same vein. If it's worth the extra few dollars to you for something slightly higher in quality/more "lager-y", then go for it. The year long Yuengling rebates bring it to about the same price point as PBR (case vs case) in my neck of the woods, so this will very much be a staple in my fridge for the foreseeable future.

L - Dark caramel to amber hue. Almost no head, but what little there is resembles a light cream color.
S - Slight corn flake. Almost a sort of metallic smell, but blame it on the can. Faint scent of malt.
T - Very malt-forward. Bready, yet crisp finish. Floral at times. Definitely checks the smell.
F - Extremely effervescent. Crisp, and very refreshing feel.
O - Probably where I'd set the bar for cheap beer. Completely inoffensive, tastes alright, and goes with nearly every food. You'll definitely find me stocking this in my fridge.

12 oz. can poured into a pint glass. Deep amber/copper color with short-lasting white head and minimal lacing. Smells of cereal grains and caramel malts. Flavor follows aroma with notes of bread, cereal and toffee caramel malts. Feint hop bitterness partially balances the sweet maltiness. Crisp with a medium body and decent carbonation. Overall, its a decent lager, and for the price, highly recommended.

This beer and Steel Reserve get most of their criticism from beer snobs and elitists but they are some of the best on the market. Don't listen to the D bags. If you like some of the more popular brands that taste like a diabetic's pee, stay away from this stuff.

yuck! Me at party.. Host: "would you like a beer" Me: having seen in the cooler only Yuengling.. "No thanks" (just to be polite).. i just won't drink this insipid swill

As a PA native, this swill takes me back. I remember returnable 16 oz bottles in super durable waxed cardboard cases. They set you back about 10 bucks in the 1980s, less than Bud or Miller for a more interesting product. Alas, times have changed, and this stuff remains at the low end but has a niche posing as a mid-range. Don't be fooled.

Reviewing on principle, as this is one that I can always lean on in situations with few options. Pours a burnt amber color with a foamy bone white head, which quickly fades. Nose is a mix of cereal grain notes and a faint hop. Flavor is a mixture of bread notes with a mild hop bitterness behind it. Slightly bitter aftertaste hangs on the palate, good carbonation helps to clean things up a bit. Nothing special, but better than all other mass produced offerings when you’re in a dive bar, golf, or party situation where better options are unavailable. When it’s fairly fresh and on tap, it’s actually quite enjoyable. A Pennsylvania staple.

A fingers worth of lush bone white colored froth... The color is a medium-to-dark copper... Loaded throughout without carbonation streaks... The nose is of cereal and caramel... The palate is simple with dominate biscuit notes and little or no hop bite... On the lighter side of medium bodied with a slight chalky finish... Simple and straight forward but unremarkable...

Drinking this at home.
Poured from a twelve ounce bottle into a pint glass.
Appears light amber with a nice white foamy head that dropped quickly to zero.
Smells malty sweet and floral.
Taste follows the nose nicely.
Mouth feel is medium for the style.
Overall a very nice inexpensive lager widely available, and I'm sure I will definitely drink again.

I tried this when my husband took me to his hometown in the Poconos. I was surprised at how good this mass produced beer is!! While it certainly is not in line with the best craft beers, it is incredible for an everyday, inexpensive, widely distributed beer. Easy drinking!

I am a lager lover. Period. I’ve enjoyed hundreds of lagers over the years and keep coming back to Yuengling Traditional Lager as the best overall. The look, smell, handle, all just what I like in a lager. I know some may like a stronger lager, more hoppy, but I believe Yuengling has it nailed overall.

And their Light Lager is nearly as good as the full lager! (I dislike most light beers...taste like watered down beer!)

This is the best example of an American Lager. It is a true lager. This is my go to with food, after work, and even social drinking. The name says it all. You won't find a more traditional tasting pre prohibition lager. Taste the history and enjoy!

Being a big lager fan this beer was below my standards however I did like it. Looks and smells good but I was hoping for a better taste to go with it. Overall not bad just not one of my favorites.

If you ever come to Philly or South Jersey and ask for a lager...this is what you'll get. Regional bias aside, it is popular for a reason: it is delicious in just about every situation . Smooth, refreshing, enough body to know it isn't a light beer, and a taste that is both unexpectedly good and easygoing. Full, Bready grains with enough noble hop type hop presence to provide a bitter, crisp initial smack to the palate. Sessionable, beer pong able, and contemplativly sippable. It checks every box needed except "exorbitantly hopped" , but that label is for the guys with the man buns. Yuengling should be compared to Miller lite and Bud light, but it isnt- its usually put up against Victory, Yards. and Troeggs. While it may not possess a certain refinement, it will definitely say "I am a man of the people, who happens to have good taste." And sometimes thats all you want in a beer. Good, dependable taste.

Beautifully clear and shimmering amber to tiger eye brown, Yuengling out of a pint can still builds that puffy, convex khaki head that slowly settles to a persistent blanket leaving droopy curtains of lace all around the glass.

Taste is almost dank up front with a light hoppy bite before some very lightly toasty caramel malt with a touch of toffee rounds and smooths it out with grace, even accented by a sweet hint of red grape.

The medium body has a soft froth and finishes cleanly semi-dry.

This is a pre-prohibition lager, and a pretty inexpensive one too. If you're not familiar with American lagers prior to the Volstead act, I highly recommend reading the history of brewing in this country prior to the 18th amendment. I have a few foggy memories from college of drinking this beer straight from the bottle or can, and now as an older adult and a more seasoned beer drinker I felt the need to revisit it with a proper glass.

Taste/Mouthfeel - Front palette is slightly bitter, mid palette had grainy notes, back palette had notes of bread crust with a slight sweetness. Hop flavor was somewhat minty and slightly floral but none too aggressive.

Overall - This is a solid beer, and given the fact I'm able to get a 6 pack of 16oz cans at about $6 or so in my area, it's probably the best value for a simple beer made for drinking in excess. The main snag is it might be a bit too on the sweet side for some palettes. My other complaint would be the head retention is quite poor.

There are some lessons to be learned from Yuengling. It's common for people who get into craft beer to snub their nose at beers like these, however after years of drinking heavier styles I find there is an admirable balance in creating a beer that is infinitely quaffable, inexpensive, and satisfying. The German immigrants who began brewing here with 6 row barley and corn and rice adjuncts weren't clueless neophytes, they knew what they were doing.

While the rise of IPA's, kettle sours, and though golden ales may have strongly challenged the former brewing practices in this country, lagers are certainly not going away, and perhaps a more thorough revival of pre-prohibition lagers should take place.

Look, this is the best beer you will find for its price. The west coast will never be the midwest or east coast because it doesn't sell Yuengling. I miss this beer every weekend, so if you live in a place that sells it, savor it. I've never had a bottle of Yuengling that I didn't enjoy. It's divine perfection to drink on summer days while working on the car. It's better in the bottle. Enjoy the taste of America.

Enjoyable in every aspect. Rich color with white foamy head. Lacing was surprisingly impressive in pint glass. Well balanced taste, pleasant, with no bitter aftertaste. Bought in the past and will be in the 'fridge in the future.

A friend in college used to drink this like water. I never really loved it, but it quickly became my go-to brew in the pandemic. Pretty amber color, slightly sweet with good balance and a pleasantly smooth finish. A delightful American lager with a great story behind the brand. The one downside is it smells like a thousand skunks when you first open the bottle. Nevertheless, will be reaching for this more often and can wait to put a few away after a long day of yard work.

12 oz can, I think canned on 5/2/19. Pours clear light copper amber with a medium bubbly white head that retains fairly well and laces the glass some.

The flavor is sweet floral caramel malts with a light roast bitter finish. The mouthfeel is medium bodied with low spritzy carbonation.

Overall, not a bad lager, but a bit on the sweet side for me.

Pours pale red. Thin head. For a mass produced beer this is one of the better ones. Doesn't taste like piss. Not a lot of flavor but it's good when you're going to drink a dozen.