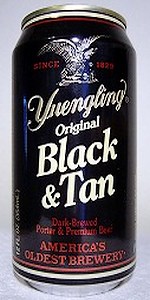 Notes: Yuengling Black & Tan models a traditional English Half & Half. Introduced in 1986, Yuengling produced one of the first hand-crafted draft blends to lead this style of American brewing. Black & Tan combines 60% of our popular Dark Brewed Porter and 40% of our Premium Beer to create a brew that is rich and dark in color with hints of caramel and coffee from the dark roasted malts.
View: More Beers
Recent ratings and reviews. | Log in to view more ratings + sorting options.
Ratings by RadDad:

Rated by RadDad from New York

3.48/5  rDev +7.1%
look: 3.75 | smell: 3.25 | taste: 3.5 | feel: 3.75 | overall: 3.5
Clear, deep brown appearance set against a copper hued backdrop. The medium sized tan head lasted a short while and left good lacing. Mild aroma if compared against many porters. Earthy, toasted malts, modest sweetness stand out. Taste is a bit more rounded. Floral hops show up while the flavor stays focused on the malts. Some dark fruit in the aftertaste. Well carbonated, medium bodied mouthfeel. Overall, not too bad but it seems out of its league for the style. Think it would not be out of place if compared to a dark lager.
Oct 16, 2022
Rated: 3.73 by Racer102589

Reviewed by Castler from Indiana

I really like the 'hints' of coffee and toffee to not be overdone. I don't like strong flavored beer at all.

It goes down smooth and I drank 4 bottles in one setting I liked it so much.

Look:
Clear dark brown with mahogany highlights when held up to light. 1-finger tan head dissipates to nothing in a few minutes. No lacing.

Taste:
Very similar to the nose. Mild and inoffensive lightly toasted bread with hints of instant coffee and cola. Maybe some roasted corn notes. No hop bitterness can be detected.

Feel:
Smooth and a bit watery. Body is on the thin or light side.

Overall:
An OK easy-drinking beer that can satisfy an itch for a dark beer when one doesn't want the heavier body and more intense flavors that dark beer normally brings to the table. Such as after mowing the lawn or on a warm day. Friends and I used to make our own version of this before Yuengling starting bottling it, but we used Porter and Chesterfield Ale (we called that a "half-and-half"). When I first encountered this beer (on draft), it became a favorite of mine for a while.

It is a good as a "real" black and tan (ie, and Irish Stout on top of either an Irish/Red Lager or Ale)? No. Not really even close. But it costs nowhere near as much and it is "premixed".

Reviewed by chitoryu12 from Florida

Taste: Thin and metallic. Tastes more like licking a penny than drinking a beer. Little recognizable beer flavor except a bit of sweet lager malt and mild bitterness on the finish.

Reviewed by bushbeer75 from Michigan

Yuengling Black and Tan poured out dark brown and produced a thin off-white head that dissipated quickly and left very “hit and miss” lacing. The aroma is light and dominated by light malt and light coffee hits the nose. Taste is close to the nose with [maybe] a little caramel and nuts noted. The mouth feel is lighter bodied than I am accustomed to for a Black and Tan. It is also smooth and a little thin.

Yuengling Black and Tan is an easy drinker because of its lighter body.

Reviewed by Joefromgeorgia from Georgia

Rated by 2market from Pennsylvania

Rated by RRB328 from Massachusetts

Rated by lojofo61 from Kansas

L - Dark brown, almost ruby in color. Pours with a one-finger foamy tan head. Head disappears very quickly.
S - Hershey's "Special Dark" chocolate. Instant coffee. Ambiguous wheat scent.
T - Light caramel backs a rush of semisweet chocolate and nutty [natural] cola notes. Surprisingly bitter. A little metallic. Finishes with a clean taste of brown bread & toffee.
F - Medium in body. Almost oily. Lightly carbonated.
O - I have to admit, this isn't a terrible beer. It doesn't really taste like a black & tan, so I'll write it up as a pretty good shot at a macro porter. It's an easy-to-drink beer that isn't too filling, but relatively satisfying to finish. None of the flavors in this beer really seem 100% "real", if that makes sense. More "processed" in flavor. That being said, it doesn't hit me in a really bad way. I'd take this to a BBQ any day, but it doesn't suit me as a daily-drinker. Not bad overall.

Reviewed by andypeters1971 from Georgia

Reviewed by LucaDiCriscio from Pennsylvania