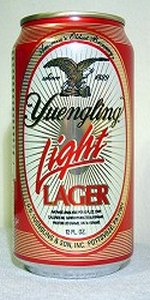 I rated this fairly high just because I drink a lot of light beer and this one is at the tops for me. It has a nice caramel flavor and, to me, a good feel for a light beer. It's far better than Miller (which I also like) but at twice the carbs. Not a big fan of Bud Light. I don't get the popularity. It's pretty thin and has 120 calories. That's just 5 less than a Guinness! Overall, a great light beer.

This may be the greatest light beer ever made. This beer is better than the original Yuengling. The biggest issue with the Traditional Lager is the metallic taste which you don't really get with the light lager. The flavor is more crisp and this beer is simply more enjoyable.

For a light beer this lager light holds it own. Has a nice Amber color with a good 1/2 inch head when poured from a bottle. It has a rich full body flavor with a touch of Carmel sweetness. For a light beer it is one that will leave you wondering if it was a full lager or light beer....

Poured from a 12 oz bottle, chilled into a pint glass.

Look: Golden hue with about a 1/2 finger of white head that breaks down to slight lacing. Lots of bubbles floating up in the process.

Taste: Tastes like a watered down Yuengling mixed with club soda. You do get some maltiness on the back end. No noticeable hop bitterness or characteristics.

Feel: Probably over carbonated for my tastes. Again, reminds me of club soda.

Overall: It is what it is. A light beer take on Yuengling which I think is a solid drinking beer. It's not terrible, but not amazing either. If you're looking for a lighter calorie beer, this is been one of the better ones but that's not saying much.

Clear amber bottle pour with splotchy bubble patches. The aroma is faintly sweet. The flavor is poor. There is little more than wet paper. The mouthfeel is thin.

Nothing objectionable, but nothing good about this beer either. The taste is essentially water maybe a slight citrus flavor in there. It is smooth perhaps on a hot summers day it would be good.

Disappointed in this one. Like Yeungling products, but this one noy so much. Not that it was weird or anything, just never could really like the taste. I like it a bit better than Miller Lite, but a good bit less than BL and CL.

Practically water with a little kick/carbonation to it. I could drink 10 of these over the span of a few hours and probably barely feel anything. I would just stick to drinking water since it is not much different and water has much less the calories than this.

Stole one from my sister and law and drank from the bottle that looked fine. Pretty standard light beer. A bit of lemon but pretty watery. It is doing in a pinch, and I intend to have better later.

One of the better light lagers on the market in the US. Smooth, fulfilling taste that isn't overly corny or sweet, but a bit bland. Looks darker than other similar suds.
Well worth at least trying it if you're looking to drink light beer. 24 oz can was $1.49 + tax. Cheers!

I drove all the way here and all you have for me is light beer! I like it and it once again a welcome break from all the overwhelming variety of craft brews! Still not as good as Hamm's though!

Served from 12 oz bottle into shaker glass. Pours a pillowy off white head that drops slowly with some mild lacing. Color is clear light amber with plenty of streaming carbonation visible. Surprising amount of aroma for a light lager -- caramel and light toasted malt are mild, but noticeable. Mouthfeel is light and fairly crisp with a mostly dry finish. Flavor is also mild, but much more flavor than most competitors. It tastes like regular Yuengling slightly watered down. I very rarely drink light beer, but if I chose to buy it regularly, this would be a go-to.

What you probably would expect - it is pretty much void of any flavor, watery etc though I can’t say there is anything offensively off about it, just bland

Light beers are not my typical go to, but I have been known to enjoy a few from time to time. As far as light beers go, I would say this is the closest thing to carbonated water that I have tasted...just about flavorless. The only redeeming quality is that it is somewhat refreshing.

Was just ok. Probably won’t revisit this one for awhile. Just wasn’t really impressed with it. Little higher priced than others in the category too. Maybe it gets a higher score next time. Cheers.

A fantastic light beer that tastes very similar to Yuengling Lager but a bit less sweet...which is a good thing. The biggest problem with these is it feels like you could drink 100 of them...so smooth and easy drinking.

Medium clear amber color. Thin head and light lacing. Smells of bread and yeast. Thin watery mouthfeel. This has a very good taste for a light beer. I can actually taste the toasted malt notes. Biscuity flavor that is outstanding for a light beer. Mildly hopped. This could almost be passed as a full bodied beer, if it weren't for the watery feel and slightly watered down taste. This has probably become my favorite light beer!

Pours a dark amber color with a thin, white head that lingers. Smells of corn, slight malt and hop notes towards the end. Taste is lightly sweet, caramel malt flavor, with a hint of bitterness and hops towards the finish. Medium light body, mildly carbonated. For a light beer it's certainly not bad, one of the better of the bunch. Similar in flavor to the traditional lager, but not quite as flavorful.

When looking for a lower calorie option during a hot summer day, I like to turn to Yuengling Light. Great smell and color (almost that of its full flavored counterpart). This beer can feel rather watery at first but when compared to the majority of light beers on the market, don’t they all? This beer has substantially more flavor than any light lager or pilsner usually consumed in large quantities. You will notice a difference in its lower alcohol content. Do not buy if you want a bargain drunk, but rather something to quench your thirst after mowing the lawn. Bottles and cans are both around $12-13 for a 12-pack.

I've always been aware of this beer, but I never considered purchasing it until recently because I've been watching my caloric intake. I recently tried MANY different light beers, domestic and imported, and many of them cost SO much more than this! 12 oz can, poured into pilsner glass.

Look: Surprisingly dark amber, much like the Yuengling Traditional Lager. Thin, foamy head recedes quickly at first but then lingers.

Taste: Wow! The first sip actually tasted a lot like their traditional lager! I detect a more pronounced malt/barley presence than I do in almost any domestic beers of this style. The only exception I can think of is Sam Adams Light.

Feel: This is where this beer becomes love-it-or-hate-it. It's got a lot of carbonation but it's kind of thin and watery, which makes it more effervescent and refreshing but less like a traditional beer. If you can get down with the soda-pop body, it's great. If you're looking for a drink with minimal carbonation, this ain't it.

Overall: Taken for what it is, and for the price point (here in Northeastern PA it's about 10 bucks for a twelve pack), this is excellent beer. It's half the price of Sam Adams Light and is almost as good! I'd been buying Amstel Light for a while, which was slightly cheaper than Sam Adams but still not as affordable as Yuengling Light.

12oz brown undated bottle poured into a shaker pint at fridge temp 99 calories, no ABV listed on bottle. The beer pours bright light amber in color with good off white head. The aroma is very faint and smells like "beer". The taste is barely tart and mildly sweet with a trace of caramel malt. There is an adjunct taste on the back end, but not bad. Mouthfeel is thin bodied, well carbonated and somewhat dry in the finish. There is a hint of soapy/oily after taste, but I have to look for it as opposed to not being able to get past it. Overall, very good light AAL.

It has more flavor than the two that are popular locally, Bud 'Lite' and Coors 'Lite'. Those are watered down and bland compared to Yuengling. The other local 'Lite' is 'Natural Lite' and it's not much more flavorful than swimming pool water.

Good for a light beer. Not a whole lot going for it on taste, almost like carbonated water mixed with a regular Yuengling. Smell is slightly corny or possibly grassy. Easy drinking. Better than your standard PBR / Bud Light affair. One of a few go tos if I'm just looking for a safe choice to drink that I'm used to.

Drank from bottle, avoid drinking this from a can it is not the same experience.

Feel - not too acidic, a very fine brew and drink, great feel. Much better than yeungling traditional, and my favorite domestic light beer

If you're going to drink beer, drink beer - hit the treadmill for 30minutes if you're worried about calories so you can avoid this metallic flavored water. As a big fan of Yuengling, as a solid go-to beer, I figured I'd try their 'light' variety. My expectations were not high to start and with each additional sip I was grateful to be that much closer to never having to drink this beer again.

Harsh carbonation, consistency of water, hints of the metal, and stale piss aromas sums of this beer.

Yuengling Light Lager from Yuengling Brewery
Beer rating: 67 out of 100 with 1142 ratings