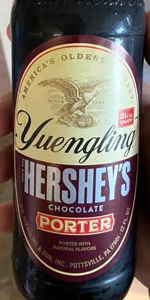 Oddly interesting, this now seasonal rotating beer hit the shelves again and something about two of the south-central PA's iconic brands coming together is a prefect pairing.

From the outside, you're going to see one of the darkest, chocolate-colored unfiltered beers I have ever seen. There are countless numbers of imperial chocolate stouts that don't get this close to milk chocolate brownish-black that proclaim 'chocolate' in their names. The most interesting part was how the head developed. Traditionally the order goes head and then beer, but porters action transformatively changed into a 2+ finger head after I poured. Not many beers get a close to 5, but this one for its appearance does. At a further glance this nearly clear in light, hazy, chocolate puts off a bit golden brown but this only happens in the right movement and light.

The smell is that of the original Hershey's chocolate. A milky sweet but yet balanced aroma that is both basic and perfect in all ways. No noticeable notes from the porter, this is a chocolate beer and it is well known. My only knock is that it doesn't have any beer smell, which I am having a porter and not sipping chocolate, but I welcome the scent.

On first taste, you get a bit of a shock to the palate. You're expecting subtle notes of chocolate to be knitted into the taste, but that isn't the case as this is a rush of milk chocolate right to the gut. The flavor is not overly sweet nor is it chalky like unsweetened cacao it is like the original Hershey's bar you know and loved as a child. The porter plays the bass and the Hersey's chocolate is the lead guitarist, with so much happening that it is easy to forget this a beer in the finish. There is a hoppy note that sits in the rear, mild spice but this must be in or around 13-15 IBU's (and that may be a bit too generous). As the beer warms up more of the yeast notes become apparent, but they're still muted as this beer is a chocolate lovers' dream; one of the best I have had.

Since this is a porter the mouthfeel is medium, full-bodied, and the action is mild. There is a lingering grain note that comes with 2-3 in a row but that is expected as this is beer, but it takes a bit of thinking to find it.

Next to Fonder's CBS I haven't really rated anything this high in a long time and it is well deserved, this is a gem.

T: Just like the ice cream at first, becoming more warming and wine-like on the back of the tongue. A real Pennsylvania treat!

F: I'm tempted to call this the beer's only shortcoming, but it's not bad at all. It's just got a mild astringency that clings to the palate like wine. The carbonation is mild but noticeable.

O: An excellent holiday brew. Nothing wrong with this one. Drink heartily my friends!

Nice dark chocolate color with a tan head, nose is a Hershey's chocolate bar, and that is elevated on the taste, with rich milk chocolate flavors and a smidge of char. Truly like a chocolate bar in a nice porter, and a pleasure to drink over and over.

2 pints at Romas in Pottsville this evening.

Arrives at the table in a pint glass. A bit too cold, but it warms soon enough. Dk brown body with a small off white head which persists in lesser form most of the way through. A little lacing early on.

Smells like chocolate milk, pure and simple. No roasted malt aromas, but the smell is pretty delicious.

Upon tasting, it pretty much follows the nose. There is no roasted malt, so it's a sweet drink. Goes down extremely easy. Abv, not listed here, is 5.0.

Mouth between thin and medium, so it's a bit light. There is a faint metallic taste right at the end.

Overall, easily the best beer I've had from yuengling. I have a serious sweet tooth, and am a known chocoholic, so this is right up my alley.

Shared this with my brother - he immediately suggested it simply tasted like Hershey's syrup was added, while I was on the fence about that, thinking it had more of a melted Hershey Kiss back note... the liquid was a murky black coffee (dark brown) color, decent amount of tan head rose on the pour(s)... faint essence of hot chocolate, muddled roasted grain... first sip definitely brought a firm burst of chocolate flavoring, not all that bad, not terribly sweet, with a subtle background tone of acrid roasted barley; the base flavor of the Yuengling beer most definitely obscured... mellow residual viscosity it seemed, but the added swell to its body suited the flavors (and perhaps supported the idea of a syrup addition)... going into it, I wondered if it might be similar to Samuel Smith's chocolate stout - while it had a similarity in the bold charge of chocolate flavor, this porter was a little more homebrew-like in its loose presentation... enjoyable for sure, and I will try a bottle when that's available, but this seems more like something that wouldn't be shamed or degraded by adding a scoop of vanilla hand-dipped; a novelty, nothing more (1591)

Very excited to taste this one, huge Hershey fan! We drove to Al's Pizza of Hampton just to get a taste before heading to dinner. It has a great aroma of Hershey chocolate and the first taste was delectable. However the finish was stony and just off. Not sure. A bit of a let down, but good try.

Draft into pint glass. Pours a very dark brown with a modest but persistent light tan head. Initial impression is a porter with a shot of Hershey's chocolate which, I suppose, is as advertised. Mouthfeel is solid but not thick - about right for a Porter. Finish is somewhat dry and quite chocolate-y. I've been meaning to try this for some time and, while not overwhelmed, I'm glad I did.

Pours a dark chocolate brown with a beige head.

Blending a PA chocolate with a PA porter that isn't half bad to start with is a great concept. However, the result was a pretty weak brew that was neither roasty enough nor chocolatey enough to satisfy.

Wow this legit tastes like a liquified chocolate bar. So fucking good!

Pours a dark cola brown color with a thin tan head that disappears quickly. There is an almost powdery like appearance to the beer.

Taste follows the nose by capturing Hershey's chocolate so well. Rich milk chocolate notes with some roasted malts come through. You do get that slight twangy acidity that is present in Hershey's chocolate here in the beer. Roasted malts are resent underneath the chocolate notes. Slight bittering hops are noted on the back end, but seem to just provide a slight balance to the sweetness of the beer. Its definitely sweet as you might expect but not cloying.

Feel is light, incredibly smooth with a slight powdery dryness that comes through. Moderate carbonation. Overall the feel is within the range of what you would expect for a porter.

This is a fantastically executed beer. The Hershey's chocolate is so well captured in a supremely drinkable porter. They hit a home run here with what they were going for. Really enjoyed this one, just sad that I will only get to have this one once.