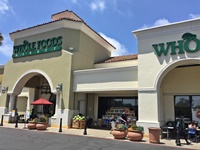 View: Place Reviews
Reviews: 11 | Ratings: 17 | Log in to view all ratings and sort
Reviews by santig0nzalez:

This Whole Foods is located near LAX in El Segundo in a nice shopping center.

Of all the Whole Foods I've been to thus far, this location has the best craft beer selection. Most beers are sold in coolers with some bombers sold on shelves. The selection is what you normally see at craft beer dedicated bottle shops. They also had a bar with craft beers on tap near the entrance.

Aside from beers, they had food stations and other goodies for sale. This is the nicest and largest Whole Foods I've been to. Too bad I don't live close enough to make this a regular stop.

Like other reviewers have mentioned, this is sort of like the Whole Foods mega store. It has every food station that one would want...burrito, pizza, sushi, panini plus your standard ready made food spots. Bottle selection is great with a separate section just for bombers. To my surpise though, it has a little bar in the back which has over 20 taps pouring flights or full pints. The price was totally reasonable, ~ $7/pint, and service was outstanding. The southbay is definitely one of my favorite areas to grab a beer and strangely enough, this just adds to the numerous craft breweries and bars in the area. They have more taps and better beer than most bars and you can order a burrito or pizza, grab a seat with a good beer and they'll bring your food right over.

NOTE: Near LAX for you travelers out there.

Love this place! I go here a lot for the selection and service and I'm not talking groceries. As many times as I've been here, I've only bought groceries once. This place has a tapas bar located in it with 20 or more craft beers on tap. I go on my Mondays off when their special is a panini and a pint and you get to keep a pint glass to keep. Craig hooks me up with amazing Pestorini paninis. He's the best.

The bottle selection in the store is pretty amazing, too, especially for a grocery store. They have a really great selction of bombers, and bunch of six-packs and four-packs in both bottles and cans, and a small mix-a-six fridge filled with a variety of beers.

As far as grocery stores I've been to, this one is the best for beer--HANDS DOWN!

I have been spoiled by living close to this gigantic Whole Foods, which I realize when I go to other locations. The others are miniature versions lacking the space to house a grocery store, a plethora of mini-restaurants, sushi bar, self-service food, an aisle of chilled craft beers, an aisle of grocery-store-temperature craft beer, displays of beer and paraphanelia (glassware, clothing, gift sets), and I didn't even get to the Tapas Bar. Yes, a bar in the middle (rear) of the grocery store with draught beer (wine, too). There are weekend beer and wine tasting events, Tapas Tuesday, panini+pint Monday. Craig has always been an awesome bartender and makes a nice vegan panini - or The Craiger for the meat-eaters. They have over 20 taps now.

Last time I was in to pick up a "couple" bottles of beer, but was in disbelief when I couldn't find what I was looking for. A clerk told me they were out, so I moped over to some alternative options. He then said he'd double-check in the back...and returned with my request. Even if he had come back empty-handed, I would have appreciated the effort. The prices are reasonable enough to me compared to the mark-up in some liquor stores. And hey, I can get other food besides beer. They've got a lot of good chocolate. It's a win-win!

I come here for one reason: on my way out of town, this is the closest spot (with parking) I know of to buy some Russian River before I leave California from LAX. Pretty much every trip west I make, this is my last stop before leaving. I'm not a big fan of Whole Foods otherwise, but this store keeps me coming back.

One of the biggest Whole Foods I've ever been in. Who cares. What counts, is this is the biggest beer selection I've seen in any Whole Foods, and rivals most any liquor or beer store anywhere.

All kinds of Lost Abbey, Russian River, Drake's. I picked up some huge finds, Aroma Coma from Drake's and Cuvee de Tomme from Lost Abbey. Had I not spent so much on my trip already, I would have bought more bottles, but alas, I do have a budget.

Beer is all over the place, awesome displays, awesome selection in its own section. Beers are also on tap, but nothing struck my fancy in that department. I'm not in El Segundo that often, but if I'm ever around that area again, I will make sure to stop in (the rich milfs all over the place don't hurt either). You should too.

This is by far the biggest Whole Foods that I have been to. Typical Whole Foods atmosphere, which is one of an upscale market. Very clean and easy to navigate.

Super friendly and approachable staff. Great quality merchandise and expansive beer selection, which favors local breweries. You can find stuff from all over California, larger microbreweries from outside California and also abroad.

The food is good. You can purchase some stuff and then sit down and enjoy you're food at the market. They also have an area where you can try some beer, which I actually have been able to do yet.

A bit pricey overall. I usually only come here to get stuff that I can't find at more reasonably priced liquor stores or BevMo.

Whole Foods El Segundo is the big brother to Whole Foods Torrance. Good for me this place is close to my work.

The beer selection here is excellent. You can pick up a great 6 pack or a great hard to find bottle here any time. They have a whole beer case devoted to high quality craft beer.

This location has a bar in the back of the store. They serve about 5-6 beers on tap. Half price Tuesdays are great especially when they have beer like Red Poppy on tap.

This is one of my favorite locations for buying craft beer bottles in south bay.

I go to this location at least once every two weeks if not every week as I work in the immediate area, it is at the end of the new El Segundo Plaza next to a Dick's Sporting Goods, they always seem to have the new local beer before most places around do, this place is a lot bigger than most other Whole Foods locations, they have a bunch of food options as far as grabbing a meal inside and eating outside or in their dining area at the front, I recommend the apricot turkey breast if you are hugnry, you can even have a beer at the bar in the back, usually have some Stone, Green Flash, or other San Diego or California brewery on tap, they have a lot of Belgian selections including St. Bernardus where they had some five liter bottles for two hundred bucks a while back, also Westmalle, La Trappe, Rochefort, Dupont, Maredsous, De Glazen Toren, and even Cantillon, they still have some older bottles of Iris, also a ton of craft beers including Lost Abbey, Alesmith, Stone, New Belgium, Green Flash, Drake's, Deschutes, North Coast, Lost Coast, Telegraph, Port, the dreaded Indian Wells, and Avery, they have a lot of beer and it always seems to be fresh, one of the better locations I have visited, will go back and probably in the next few days actually, recommended if you are in the area

I can not compare this Whole Foods to others, because this is the only one I have been to for beer, but this place is awesome. There is a great selection of all things California, from Stone to Marin to Russian River and of course Sierra Nevada beers. Within the last 2 months I have picked up 4 bottles of Consecration from this store. There is also a wide variety of Belgians.

Be sure to check out BOTH beer coolers. There is the main cooler (near the wine/beer tasting bar in back) and then there is the smaller cooler that has all of the limited edition brews and special releases. Also check out the store calendar. There are beer tastings every Sunday-Tuesday, with a different brewery or style on showcase every week. Most tasting are only $5 and include some type of food. This has pretty much turner into my go to spot for all things beer in the South Bay.

This is an enormous Whole Foods, probably the biggest I've every seen. The beer selection is very, very good and also large. The beer selection is actually split into three sections: Japanese, Rarities & Seasonals, and the rest. Great Belgian selection, including lots of hard to find stuff. Alesmith, Russian River (Blind Pig, Pliny the Elder, and Damnation), to go along with most craft beers that are distributed to SoCal. Most of the stuff is in coolers as well. They also have some cool large bottles including a 6 liter St Bernardus. Great beer selection, probably the best I've seen in a Whole Foods.