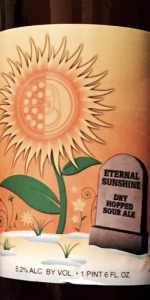 Valley Road Enterprises / Pizza Boy Brewing Co. "Eternal Sunshine"
Sampled from what seems like a 16 fl. oz. can but which is not labeled as such. Coded "WALKIN ON SUNSHINE 11/8/17 14:52"
$3 at the brewery

Notes via stream of consciousness: Wow, this is really light in color. Or at least it seemed to be as I poured it. Now it's a kind of cloudy light yellow gold. It looks a little like a witbier. The bright white head was hard to bring up, and now it's already dropped. I'm guessing that it's just lightly carbed so as not to amplify the sourness. On to the aroma... mineralish citrus rind with a hint of lemon. I guess there's a little grainy malt in there as well but not much, and just a suggestion of hop resin. It's "clean" as far as sour beers go. The flavor is tart with a very light bit of sweetish malt, some chalky mineral, some fruit pulp/rind, and a light touch of grassiness. It's not bad but it's not great, and fairly light overall. You could certainly drink a few of these if you wanted to though, perhaps on a hot day at a baseball game or something. What's the alcohol? 5.2%? Well that could catch up with you though. On to the mouthfeel, it's light in body, and softly carbonated as I'd suspected. It's not really that tart though so I'm not sure that keeping the carbonation soft was really needed. But I'm not the brewer so who cares what I think. It needs a little more of everything in my opinion anyway, especially hop aroma. I was hoping for something special but this is actually my least favorite beer from Pizza Boy.

A pale golden body with persistent, soft and pillowy carbonation throughout the entire session. I let this sit in a crowler in the fridge for the better part of 6 months and it still came out stellar.

Smell is pear with a good amount of lemony dry hops and a bouquet of wildflowers.

It's quite hoppy, but only in a floral, citrusy way, with a really nice balance of tartness and light sweetness, tasting of apple, pear, lemon and flowers.

Perhaps my new favorite beer. Aroma of peach, pineapple, mango and other tropical fruit with a slight hint of tartness. Tastes very similar as in the nose although has more noticeable tartness and funk going on. Very easy drinking and refreshing. Could crush this all summer long. Naysayers may poo-poo this beer for being cloudy but I don't really give a funk about that. Tastes great and only 5.0% abv. Please make more of this beer if you're listening Pizza Boy!!

Appearance: Pours a honey color verging on golden with a modest head that leaves a few drizzles of lace

Smell: Acetic tones of sour citrus along with hoppy bitterness

Taste: Slightly grainy and citrusy, up front, with lemon leading the parade; in the middle, the acetic character fills in, though there are plenty of bitter hops in the finish

Overall: An interesting combination of hop and sour tones

Thanks, justanewby, for the opportunity

A: poured into a tulip to a slightly hazed pale yellow with a finger of dense white head that fades to a small pool. Some lacing sticks around as well
S: smells of tropical fruits with some pineapple and mango. slight citrus as well. Smells phenomenal
T: Taste is a nice blast of tartness to kick things off with plenty of pineapple and mango flavors. Great grapefruit rind notes as well with just a hint of sweetness. Swallow is more tropical fruits with a little bit of pine.
M: Lighter side of medium on the palate with soft but slightly prickly carbonation. Semidry finish as the hops try to coat the mouth and the acid dries.
O: This beer rocks the house. The sour base and the hops play very well together making this one a treat. If you see this you should buy it.