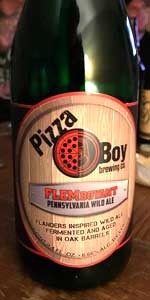 same murky look as the blackberry, maybe just a few shades more red than purple i suppose, but with the same acetic and vinegar sour notes that totally overtake the beer. with just two of their beers under my belt, it seems like i have their formula figured out, and im not in love with it. buld a heavy quick sharp bacterial sourness, pull as much oak in as possible, and sell it for an outlandish price that in no way correlates to quality. the beer is good, very good even by some specs, but man, its just not worth the price! some dried cherry and tannic fruity red wine to this, a lot like the blackberry sour in a lot of ways, save the blackberry itself. what i like in both of these beers though is all the wood, they all have a rich texture and sturdy earthy base beyond the grain, and i think thats a cool feature in wild beer, its mature and vanilla tasting, and is there all the way through. the sourness here, and with the blackberry, is just way off the charts, you have to really like this flanders vinegar thing too. to me it hurts the enamel on my teeth and tastes a little tinny, but i can see the appeal for those who chose acids over flavors and refinement. i like the beers, but at these prices, i am developing a little grudge against the brewery. if this was 15 bucks it still would be more expensive than its worth...