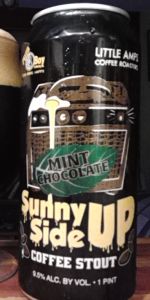 Rated by jagada from Pennsylvania

As was the case with this.

Sure, I traded for this a while ago as the date on the bottom of the can read 6/8/17 with "I MISS TERRY" written above it and sure,it held up well over the two years that it took for me to finally get around to reviewing this. There wasn't any sediment to be seen at the bottom of my pint glass and this felt as fresh as could be but at the same time, it was a bit gimmicky as I waited for this this warm up to me, as I attempted to warm up to it...

Of course, this beer poured a dark brown with plenty of bready, bubbly mocha head to top it off. Very, very little lacing was left behind as that was an indication of how thin the liquid was. Tons of molasses, sugar, mint, and sarsaparilla in the nose as this felt like one of those "Not Your Father's" type brews that's taken storm in recent years. The taste was that of fructose, corn syrup, and vanilla with a ton of mint syrup tying everything in together. This beer was quite heavy, lacking in carbonation, and needing more coffee to keep it light and slick. There were hints of a Breakfast Stout here but this was too heavy to be considered as such and I'd sooner have this as a dessert rather than something to quaff first thing in the morning!

Plenty of booze here but thankfully, it was quite recessed as it let me take the time and effort to figure out what this was about. One of the oddities that I've had recently, this wasn't bad as much as it was just too heavy and complex for me to fully appreciate. This tasted like coffee with shots of cordials poured into it and if you're into a minty body bordering on menthol with a clean aftertaste and high level of potency, then you've found your match here. Worth a go once but this needed a side of eggs and ham in order to be fully considered as "Sunny Side Up", by yours truly!

3.92/5  rDev +2.1%
look: 4 | smell: 3.75 | taste: 4 | feel: 3.75 | overall: 4
Canned 6/8/17.
Moderate pour yields a tan head over a very dark brown, almost black, body with some lacing that is gone in a couple minutes. Nose of roasted malt, chocolate, coffee beans, and mint with a slight root beer aroma as well. Tastes of chocolate, mint, and some coffee. As it warms the coffee comes forward on the nose and the palate. Rather thin feel on this but overall a fairly enjoyable experience. Cheers!
Jun 20, 2017
Sunny Side Up (Mint Chocolate) from Al's of Hampden / Pizza Boy Brewing
Beer rating: 3.84 out of 5 with 6 ratings