Sunny Side Up (Coconut)
Al's of Hampden / Pizza Boy Brewing 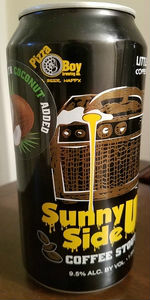 Nose lush dark chocolate, cocoa, mocha, some roasted coffee notes and roasted malts, a bit of a marshmallow nougat candy bar with some toasted coconut, not a ton of coconut but enough, hint of earthy spicy hop

Mouth is med to heavier bod, a bit of a fluffy feel with fluffy carb, hint of alcohol, touch of a coconut oil like.

Overall an interesting and enjoyable beer, would prefer a bit more coconut but rather it like this than rancid oil or so tanning oil coconut thing, nice cocoa, a bit of coffee, wish there was more coffee as well, still pretty well done beer.

Pours black with a brown one finger head. Aroma of coffee roast and coconut. Taste follows the nose with milk chocolate, vanilla and a nice toasted coconut finish. Alcohol is well hidden

Thanks to JLindros for hooking me up with a can.

A - Poured into my Duvel tulip a nice dark dark brown nearly black with a big, creamy two finger mocha head that fades incredibly slowly to leave a very fat blanket and excellent side lacing. This is what stouts are supposed to look like. To the T.

S - Aromas of light roasted malts, nice bakers chocolate along with some chocolate syrup. Coffee is somewhat subtle here. Coconut is a bit on the lighter side. More toasted coconut than something assertive. Smells like a chocolate bar that has toasted coconut in it.

T - Taste is similar to the nose. More of those nice dark malts. The coffee is a bit more powerful with some very nice roast qualities. Little nuttiness as well. Nice dark chocolate flavour. The coconut is almost slick and oily. Still has that toasted coconut flavour but it's almost has weight to it. As it warms the coconut comes out even more.

M - Mouthfeel is nicely carbonated, medium bodied, creamy. Does feel a bit slick in the mouth and the alcohol is noticeable on this one, as opposed to the Cacao nibs version where it was hidden wonderfully.

O - Overall this was a beautiful looking stout with some excellent coconut notes as it warms. The coconut is a bit oily though oddly enough, which clashed with how the beer felt against the tongue. Either way, this was a very nice stout.

Coffee dominates the nose, and is the most prevalent on the palate, but well rounded and the coconut does show up as it warms. Highly recommended, would love other variants

Coconut comes through as the beer comes to room temperature with a toasted coconut aroma and a slick, oily mouthfeel (in a good sort of way). Not a coconut bomb by any means but still very tasty.

Good, but I'm not detecting any coconut. I think I prefer the regular and the cacao nib.