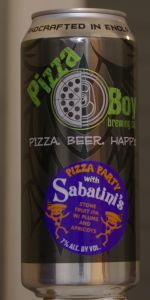 At long last, I am finally getting around to an extensive brewery horizontal to clear out a massive backlog in support of The CANQuest (tm). I knew that I had a number of their beers in abeyance, but it was not until I beCAN assembling them that I realized just how extensive my inventory actually was. This one is going to make a LOT of people VERY unhappy since they probably checked-into it under the HawaiIPA version. It's called attention to detail & I am not terribly happy about it, either. 12/16.

I beCAN by Crack!ing open the vent, only to be met by & with some mild foaming. I gave it some calming time & discovered that it was due to its being a brimful craft CAN with nowhere for the tongue to go. Bearing all of this in mind, I CANtinued with a slow, gentle C-Line Glug into the awaiting glass. I had seen some Untappd pics in which it was filled with chunks & floaties, but I did not want that for my initial Glug. It foamed to form two-plus fingers of foamy, soapy, rocky, bone-white head that quickly drifted off into wispiness. Color was a deeply-hazy/lightly-cloudy Golden-Amber (SRM => 5, < 7). Nose had a light tartness that I recognized as fermented plums. My late-maternal grandfather had a grape arbor & used to make Concord grape wine, but one year, he hit upon a supply of plums & decided to give them a whirl. The smell that emanated from the basement is one that I will not soon forget! Mouthfeel was medium. I remember, as a kid, thinking that apricots were somehow miniature peaches and really bit into one, expecting that sweet juiciness, only to be met with its tart tang. The taste was definitely of fermented plums and apricots! This was less an IPA and more of a Fruit & Field Beer, but the brewery chose to identify it as CANother blah, blah, blah IPA. I did not perceive any hops or bitterness, while the fruity tartness remained throughout. Finish was tart & dry, but hardly what I would expect in & from an AIPA. My final Glug revealed enough fruit chunks to make me think that I was drinking liquefied preserves! YMMV.

Pizza Party With Sabatini's: Stone Fruit IPA from Al's of Hampden / Pizza Boy Brewing
Beer rating: 3.66 out of 5 with 1 ratings