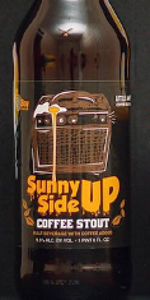 Thanks to robieobie1 for this one - poured out of a growler and split at a tasting amongst four of us. Pours a very dark brown color that appears to be pitch black once it reaches the glass. Only very light edges of deep ruby red break the blackness on this one. The head is a light-tan color with a grey-ish hue to it, low retention and little to no lacing left behind on the glass.

The aroma on this one carries far and heavy, and it hits my nose before I even bring the glass up to it. Big time coffee up front; coffee beans, dark and roasted while being lightly sweet and creamy on the nostrils all at once. A nice tale of two flavors going on here. Some deeply roasted malts make up a nice background to the coffee aroma. Little, tiny bits of cocoa comes through a little bit more as time goes on, but the coffee remains the strongest. Very nice, dense coffee aroma without being too bitterly roasted or too sweet. Very powerful but pleasing at the same time.

As I take my first sip, I'm reminded of some of my favorite coffee stouts - FBS, WnB, etc... Heavy, heavy coffee flavor is packed densely into each and every sip. It starts off with a light sweetness and a creamy, milk texture and flavor. After swarming the palate for a few seconds, it cascades into a more roasty and bitter coffee blend - the same time that the roasted malts becomes noticeable.

Chocolate bits are mixed in as well - more-so at the beginning of the sip and not so much at the end - the finish is dominated by coffee and roasted malt. There is definitely a light hop character to this one, a bit ashy and dry, that adds a touch more bitterness to the mix. The aftertaste is a nice, lasting roasted coffee bean flavor. A touch thinner on the mouth than expected, but still silky and slick. Nice carbonation, especially after a week in a growler.

Holy shit - after looking this one up, I was shocked that it was 11% ABV. I had no idea - you couldn't feel any heat, aside from a little bit of warming that is even common in sub-7% stouts. So drinkable it's scary. This was kind of an "unknown" coffee stout to me, but I'll be the first to say that this could stand up with some of the best. One of our group's favorites from the tasting event, and honestly - probably my favorite non-barrel aged coffee stout. Yes, even a smidgen better than FBS.

32oz crowler courtesy of LehighAce06, with the name of the beer hand-written on the crowler label. My first crowler! I’d never heard of Pizza Boy before, though the label actually makes no mention, and lead me to initially believe the brewery itself was called Al’s of Hampden. A pizza place that makes beer? Someone needs to do this in Spokane.

Poured messily into a 14oz Jones Radiator mug, this poured a color so brown as to look inky black in the glass, with a big, mocha-colored foam head that was unique in that as it sat there, bubbles would explode within it, giving it a look like a cross between the craters of the moon and Swiss cheese. Said head dropped after a few minutes, leaving only the tiniest foam collar. Really not surprised the head fled, give the high alcohol content.

Big coffee nose to this. It might have been a good idea to lead with this one and drink it during breakfast.There was initially some dark chocolate notes, but the coffee aroma actually grew as it warmed up.

More balanced in the taste than in the nose. Sure, there’s a big, slightly acidic coffee blast, but the sweeter notes noted (I sound like Danny Kaye in “The Court Jester.”) come out to play more so than there. While there’s plenty of bitterness, it’s more coffee bitterness than the type encountered with a typical RIS. The high alcohol is hinted at by a warming booziness, but it’s more in the background than you’d expect for a beer this strong, like just a faint wisp of menace.

Fairly full bodied, but with a velvety-smooth mouthfeel, not unlike the best oatmeal stouts I’ve had.

It’s a little incongruous drinking this when the thermometer just hit 100, but I’m indoors in a cool room with a nice, electrically-induced breeze blowing, and it’s drinking just fine. Since this is an 11% abv beer, it’s entirely possible that I’m done for today, but I’m very happy to have had this. It drinks like an Imperial Oatmeal Stout, but I don’t think there’s such thing on this site as an IOS, so I understand why it’s listed as an RIS. My only problem is I only have one, otherwise there’d be one being set aside for consumption on a cold winter’s night when I didn’t have to go to work the next morning. Thanks, Kevin!

This is a very elegant & well-balanced beer - I am no coffee expert, but it certainly tastes less like diner coffee / Folgers & certainly richer and more robust in flavor. It compliments the base beer wonderfully without drowning out the core flavors. The coffee note is just note perfect - leaves you wanting more while still presenting a fully realized flavor profile. Smooth and creamy mouthfeel. One of - if the best - coffee beers out there, and certainly one of the most undersung.

Received from a fellow BA in NBS/BIF #2. Packaged in a 32oz. Crowler can, I'm positive it's fresh.

Taste- Fresh dark roast coffee with bakers chocolate and a hint of vanilla in the finish.

Feel- A little on the thin side for such a decadent beer.

Overall- In one word, WOW! This is like liquid espresso-chocolate cake. It definitely has to be in the conversation for one of the top coffee stouts. So glad I had an opportunity to try, I would make it a staple in my beer fridge if I lived in the distribution area.

Brought home from a growler after a visit to Al's of Hampden/Pizza Boy and split with 2 other beer pals. I really found this one flawless. Balanced and flavorful in every way you want a stout. A lot of coffee in the nose and a lot of chocolate in the taste. Smooth finish, nothing off/ashy etc. Its just dialed in perfectly.

The alcohol is very well hidden

Growler shared at Top Hops in NYC, thanks to...Beerworld, I believe. Thanks for the generous pour!

Pitch black body with a small tan head. Some sticky lacing remains. A big expresso aroma augmented by burnt grains. Taste follows the nose in a big way; this is one massive coffee blast of a beer. Very fresh espresso flavor dominates in a way few other coffee beers demonstrate; again there is some charred, burnt grain character and hints of bittersweet chocolate, earthy hops, and alcohol, but this is all about the coffee. It's not a flavor note or aspect, its not balanced or subtle. I love coffee and I loved this.

Pours silky smooth dark brown and sits midnight black in the glass with a half finger of light khaki foam.

Tons of roast, fresh coffee grounds, cereal, and some chocolate.

Overall, one of the best coffee stouts I have had to date.

Pitch black, no seeing through this glass. Taupe head very quickly settles to to a layer of taupe bubbles. Few lacings.

Aroma of a sweet coffee

Like this one. Very good beer . Fill 'er up.