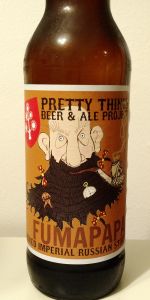 Held up to the test of time; as they always say, wish I’d stashed a few more away...

Looked beautiful. Poured thick and left a nice rim plus more brown foam in the center. Pretty impressive given 7 years of aging.

Smell - nice stout smell, a bit of roast and char but not too heavy, a tiny bit of sweetness. No smoke.

Taste - not as strong as the smell, more mellow from a roast and char sense. If I tried really hard, I could get a whiff of smoke but that was largely gone, or was never there to begin with. Either way - when it warmed a bit, it was great, everything clicked right. Hard to pinpoint, just a close to perfect RIS in the traditional sense.

Overall - think I’ve got two more Pretty Things left after this, so this was a warm up to the finals...and a damn nice one. Hadn’t had it fresh, so glad I had it nicely aged. Cheers!

Reviewed by Witherby from Massachusetts

4.54/5  rDev +6.8%
look: 4.75 | smell: 4.5 | taste: 4.5 | feel: 4.75 | overall: 4.5
Bottled December 2015. My last remaining Pretty Things bottle. Opened to celebrate the opening of their new brewery in England. Didn’t ever drink the beer when it was fresh so I’m not sure how smoky it was originally but three years on it had no noticeable smoke aroma or flavor. Instead the flavor and aroma are dominated by chocolate. Thick and rich and strong but no hot alcohol flavors. Very tasty.
Jan 01, 2019
Rated: 4.25 by Patches826 from Massachusetts

Reviewed by fitzy84 from Massachusetts

4.32/5  rDev +1.6%
look: 4 | smell: 4.5 | taste: 4.25 | feel: 4.5 | overall: 4.25
Bought a bottle at the Beer Shop in East Longmeadow. The beer poured with a black appearance and a thin, brown head that lasted throughout the evening. Aromas were full of malt, dark roasted coffee, mocha, and chocolate wrapped around a woody, earthy tone. Incredible taste of boozy, sweet chocolate and caramel. Great texture and mouthfeel; creamy and dense. Overall, a fantastic drink from a brewery I will miss.
Jan 10, 2016
Rated: 3.53 by mikemikemike from Massachusetts

Reviewed by ManapuaMan from Massachusetts

Reviewed by foundersfan1 from Missouri

4.74/5  rDev +11.5%
look: 4.5 | smell: 4.25 | taste: 5 | feel: 5 | overall: 4.75
Very dark with a middling cappucino colored head. Full of great smoky aroma lightly backed by chocolate. Full of wonderful smoke, the chocolate is more present than in tharoma and coffe finishes with flavor and bittering leaving you to come back for more. Thick, syrupy and chewy mouthfeel exactly what I want from a RIS. Sad to see Pretty Things coming to a close, especially since I just found this great beer. I will be heading back out to pick up more of these while they are still left on the shelf.
Dec 01, 2015

Smell: Chocolate and smoked meat with hints of coffee and caramel

Taste: Smoke forward with sweetened dark chocolate building; the hints of caramel and coffee arrive after the swallow but the smoke and chocolate continue to dominate through the finish

Mouthfeel: Full bodied and rather creamy; low to moderate carbonation

Overall: I am not the biggest fan of most smoked beers and while that would limit my desire to revisit this one (despite being sad about the demise of this brewery) this is a good beer for the style

Reviewed by PhillyJ from Illinois

4.47/5  rDev +5.2%
look: 4 | smell: 4.5 | taste: 4.75 | feel: 4 | overall: 4.25
Sweet and Smokey! Bought this as I've never had a smoked stout and gotta say I'm impressed im now searching for their other stouts. I was also really impressed with the flavor behind the smoke which dominates the nose and the intro flavor profile then flows into a sweet and roasty flavor like a traditional ris.. This would pair so well with a steakhouse style burger. The smoke hides the complexity that I think their standard ris will have can't wait to find it. Good job Pretty Things
Nov 16, 2015
Rated: 4 by pjvie from Oregon

The beer poured a thick and viscous near pitch black. Motor oil-like in appearance. The liquid was topped by a small, frothy, burnt sienna crown that quickly fell to a thick ringlet. Streaky lacing stuck along the glass.

The nose was quite smoky and really complex. Somewhat peaty. Rich and robust. Moderately roasty and fairly sweet. Good dose of brown sugar sweetness. Raisins and plums were noticeable. Dark chocolate came through as well. Very fudgey and rich. A hint of port-like booziness was also noticeable. Spectacular.

Flavor wise, the beer was very similar to the aroma. Malty and robust. Moderately smoky. Again, dark fruits were noticeable. Raisins and prunes came through strongest. Hefty amount of brown sugar. Hints of dark chocolate and powdered cocoa were noticeable as well. The chocolate notes were however much more subtle here than in the aroma. Perhaps some vanilla and sweet cream. Moderately boozy on the back end. The beer finished with an intense whiskey-like kick but somehow strayed from being overly hot. For 12% ABV, the alcohol was actually rather subdued. A touch of earthy hoppiness also appeared. Really fantastic.

The liquid was uber rich and thick on the palate. Viscous. Super creamy and frothy. The liquid contained a fine, zippy effervescence that, despite the beer's hefty weight, gave it a fantastic fluffiness.

I try not to expect too much from a $10 imperial stout, but this beer really blew me away. With such an intense flavor profile and mouthfeel, and the added element of smoke (which I love in a beer), Fumapapa ranks up there with some of the best stouts I have ever tried.

Sep 23, 2015
Rated: 4 by Pearlstreetbrewingco from Florida