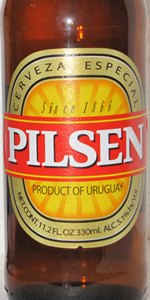 Notes:
View: Beers
Reviews: 27 | Ratings: 43 | Log in to view all ratings and sort
Reviews by hoppytobehere:

Haven't had this stuff since I was in Uruguay, surprised to find it here.

A: Not bad for a macro. Decent retention.

S: Not much to write about here. Faint smell of corn cereal.

T: Smooth taste. For South American macros, this is one of the better ones.

O: Beats the pants off of Argentina's Quilmes.

Take a cheap beer, add 1lb sugar and a rotten orange and you have Pilsen beer. I had the opportunity of having this beer at a BBQ and it completely destroyed my taste buds. Could not taste anything else until I washed my mouth. Overwhelming sweet/tart citrus taste with a watered down feel and an even sweeter finish. (Must mention that this was the only beer offered at the BBQ). Sticky, sweet/sour aftertaste will linger.

Taste: Opens with a burst of fairly substantial herbal hops, these dominate the taste from start to finish. Beneath the hops there is a mild, toasty, biscuit-like hop presence. As the taste progresses, the hops never yield dominance, lingering on past the close.

Drinkability/notes: A mediocre example of the style, forgivable in light of the low purchase price.

Sourcing: Purchased at Spec's in Texas for $3.99 plus tax for a six-pack of eleven point two-ounce bottles.

This beer pours a light clear yellow with white head that quickly goes away. There is a strong DMS and metallic smell, really bad, I don't smell anything else. The taste isn't all that bad, but for a Pilsner it is way to sweet with no hop bitterness to back it up. The mouthfeel is typical macro lager, light and somewhat refreshing, but the sweetness just sticks to your tongue.

Bottle: Poured a clear golden color lager with a small pure white foamy head with ok retention and some light lacing. Aroma of light adjunct notes with light sweet notes is pretty boring. Taste is also dominated by lightly sweet malt notes with light adjunct notes and not much else to report. Body is average for style with good carbonation. Bland lager with boring personality.

Somehow the score isn't quite as good as I thought this beer would be. Poured with a big frothy, foamy, soap bubble head. Some lace. Head is white and beer is gold colored. Aroma is typical worldwide common beer but with a grass and a hint of fart. Flavor's about the same with some spoiled grain thrown in. Lingering funky sweetness. Body's not too bad. Not the worst. Could drink another if there weren't many options.

Had this brew on tap in Uruguay, where I go every year for two weeks. Very light in body and color with some hints of corn and malt. The taste is very crisp and clean with very generous corbnation. Hops are present but not overpowering. It is the perfect beer for those hot summer days.

330 ml. bottle, it pours a clean golden colour, with a decent compact head that fades quickly, leaving a thin cloak on the surface for a little while, then it's like golden water.. Nothing much in the aroma, just grains and some citrus. Crispy palate, medium to strong body, taste is clean and carbonated, nothing complex or special. Anyway, it's refreshing and you could have some of them in a hot weather. I'd say it's better than many of your typical industrial beers.

Pilsen is an attractive and clear beer with a very soft yellow colour, one almost identical to that of the Sun of May on Uruguay's flag. Its head is nearly non-existent despite a visually aesthetic stream of fluttering bubbles. The beer looks suited to such a sunny, warm weather climate.

The aroma is light and airy, with barely perceptible notes of straw and cereal grain as well as a trace of sweetness. It's not at all objectionable - especially not by Latin American macro standards - but fails to arouse a reaction any stronger than "meh".

The taste, likewise, is dull as dishwater but, even more importantly, is clean; despite a long and concerning list of alpha-numeric "adjunctos cerveceros" (additives) listed on the back label, this lager is free of any syrupy sweetness or overly corn-y taste. (Mind you, it's free of virtually any taste at all...)

Pilsen is an agreeable offering so long as you're willing to accept the bad with the good. It doesn't have any of the qualities I prefer in a lager (i.e., crisp bitterness and broad maltiness) but it also lacks the off-putting characteristics that distinguish most mass-produced industrial beers (principally the two outlined above).

All things considered Uruguay has a much more decent national brand lager than many other countries. I don't entirely believe that lacking the good things is made up for by also lacking the bad, but in some situations that's sadly the most you can ask for. Those living or traveling in that part of the world could do worse than Pilsen.

Smell is malty, with corn in the bottle. Pours to a light
golden yellow like a typical adjunct. Taste is slightly malty mostly corn. Hops, what hops? And that is a great place to grow hops. Mouthfeel is too highly carbonated. This isn't a pilsener, its only in name. No dryness like a typical pilsener, mostly corn like most south american adjuncts. I would avoid unless its an option between water and this.

A - pours with one finger of white foam on top of a clear, golden body. Good head retention and lace.

S - bready malt and a hint of graham cracker. Some herbal hops with a hint of sulphur in the background.

T - grainy malt up front with some honey in the middle. Moderate bitterness, and a hint of herbal hop flavor in the finish.

D - this is surprisingly close to an actual pilsner. The malt character is light, but has some actual character to it and the hops provide a pleasant bite. Quite good for what it is.

A: The beer is crystal clear yellow in color and has a slight amount of visible carbonation. It poured with a thin bright white head that died down a bit, consistently leaving a thin layer of bubbles covering the surface and a collar around the edge of the glass.
S: Light aromas of sweet, bready malts are present in the nose.
T: Similar to the smell, the taste has flavors of bready malts with bits of associated sweetness and hints of grainy malts. A slight amount of bitterness is present.
M: It feels a bit more than light-bodied and somewhat smooth on the palate with a moderate amount of carbonation.
O: This beer is simple and very easy to drink without any "off" flavors.

While most South American lagers call themselves "pilsen", Pilsen is the only name of this Uruguayan beer. From a 330 ml bottle, on to the beer:

A hard pour into a flute gives this beer a color that is nearly golden and boosting some large bubbles though the body, and a soapy thick head which is dropping little by little until it's a small ring of lace. The nose, not good. There's a little boiled corn, some solvent alcohol, sweet hay. This is not promising.

The taste is quite pedestrian. Vague cereals, some alcohol, a little yellow corn sweetness, minerals. It's just palatable. A little watery in the mouth with some sparks of carbonation.

It's about what I expected, but at least now with its importation to the US, American beer tickers now have the opportunity to taste a beer from Uruguay without leaving the US. I've already had Patricia and Zillertal, so this isn't my first Uruguayan beer.

A: Pours a crystal clear medium yellow in color with moderate to significant amounts of very active visible carbonation and light golden yellow highlights. The beer has a quarter finger tall bright white head that reduces to a very thin film covering the majority of the surface of the beer and a thin ring at the edges of the glass. Moderate amounts of lacing are observed.

S: Light aromas of bready malts with a light amount of sweetness that is followed by some light notes of grassy and herbal hops.

T: Upfront there are light to moderate flavors of bready malts with a touch of grainy sweetness that is followed by some light flavors of grassy and herbal hops. Light amounts of bitterness which fade rather quickly.

M: Just shy of medium bodied with moderate amounts of carbonation. Light amounts of dryness in the finish.

O: This one is pretty easy to drink and lacks the skunky flavor/smell that is often found with imports in this style. Easy to drink and seems like it would be pretty refreshing on a warm summer afternoon.

The aroma is almost nothing with malt and hints of grass and air freshener. The appearance is pale gold with a small head. The flavor is like the aroma with a slightly cardboard taste and a watery finish. The palate is thin. Overall there isn't much here to like.

A gift from a client tonight who just returned from Uruquay. This one was really a bit of a surprise to me. I liked it quite a bit as simply a very drinkable and approachable Pilsener (not my usual preferred style) with some real nice characteristics.

Nice fruity yeast nose that is quite pleasant, albeit simple.

Very short in the mouth but with a pleasant feel. The mouthfeel that is a bit thin is highlighted by nice simple white bread/yeasty character that is rich and appealing. This would be nice basic brew with just about any food. In fact, it's really very drinkable and universally appealing. This is a lighter beer but one with some real character to it.

Finish is a pleasant fruity/yeasty/biscuit-white bread character. This is a very decent brew that would really go well with a lot of food profiles.

Poured from a bottle into a Pilsener glass.

Smell - typical light lager type of smell. Not much else to it.

Taste and Mouthfeel - also typical in the light lager type of taste. Not much of a German Pils in this one. Texture is also typical, well-balanced in general, but more toward the watery side.

Overall - a bit of a lackluster beer. Not much too it, but not bad either.

pilsen. one of three similarly styled beers readily available in Uruguay; i tended to prefer this one over Patricia and Nortena, though they could be interchangeable like bud, miller, and coors.

appearance is golden-yellow with a tight white head and medium bubbles. i get a faint hint of cereal grain in the nose, but very little overall. this is straight up pilsener style beer found all over south and central america. somewhat crisp, but with a note of sweetness on the back. very easy to drink while cold (no surprise), and reasonably priced at around $2.50 per liter at the corner shops. this beer has more body and bite than the american macros, but in the end it fulfills the same roll: accessible beer for the masses that quenches thirst, delivers alcohol, and doesn't make you think.

Pilsen from Fabricas Nacionales De Cerveza
Beer rating: 70 out of 100 with 43 ratings