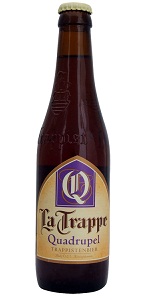 Notes: Quadrupel is La Trappe’s heaviest ale with a stunning amber colour. Its warm and intense flavour is rich and finely balanced. Malty sweet, slightly burnt, and pleasantly bitter with a sweet aftertaste. Quadrupel continues to ferment after bottling and offers aromas of banana, almond, vanilla and others.
View: More Beers | Place Reviews
Recent ratings and reviews. | Log in to view more ratings + sorting options.
4.09 by cold_beer on May 06, 2022
4 by Ushouldbeworkinh from France on May 02, 2022
4.07 by WDJersey from Colorado on Apr 18, 2022
4.62 by ALeX117 on Apr 06, 2022
4.24 by Korbynlehr from Kentucky on Mar 13, 2022
4.23 by PapaGoom on Mar 13, 2022

Appearance: Light brown head, about two fingers. Large bubbles. See through, reddish brown body. Moderate head retention. Sediments show up only after serving its second half, and only slightly affect its transparency.

Aroma: I’ll attempt to name its components in the order that they show up: Breadiness, alcohol, raisins, light red fruits.

Taste: First, thick, lingering and aggressive sweetness, followed by bready, boozy bitterness and alcohol with some light, fermented bananas. Perfect amount of carbonation. The sweetness quickly bounces back, joined by raisins, dark fuits. Invites you to keep drinking. The taste of alcohol is mild in comparison to its volume.

Veredict: Amazing beer. Complex, but its thick sweetness makes it incredibly easy to drink. Easy to find, and can be served cold while retaining most of its flavor profile. Probably not as fruit heavy as the Belgian counterparts, and definitely not as funky either, also lacking in spiciness. Similar to drinking Coke, though infinitely heavier and doesn’t rely on carbonation and sheer sweetness as much. Still delicious and I’ll try to always have one on hand, as it proves to be much easier to find than the rest. 4.5/5.

Very good quad. I like this one, but I wouldn't call it one of the top examples of the style. It's certainly no Abt 12 for example.

It's still a very drinkable, smooth beer with a nice mix of dark fruits on the palate. Crisp finish and it does a great job of masking its ABV. I'm sure I'll be buying this again a few times.

An even pour yielded a big off-white head; a thick curtain of lace.

I loved the look and color of this brew - it was enticing and had the "come hither" look. Smell was just as I like - bready, fruity, with lots of vanilla and caramel. The feel was velvety, rich, and smooth. Unfortunately, it wasn't my preferred style so it didn't "wow" me like it does some others - not it's fault, mine.

Not my fav Quad but a good one. If you like Quads, this one has most of what you expect. Just a tad less punch flavor-wise than others.

O---Really a sipping beer, one meant to be enjoyed slowly. Overall, excellent..

Taste: malt, dark fruit, a bit of yeast, not nearly as good as the best quads

Need to perform a blind tasting but feel like this can become my #2 Quad behind Rochefort 10...really love the banana/clove/honey/almond/toasted coconut thing going on...this beer is less medicinal than other quads I've enjoyed before. Need to try more from not only this brewery but St. Bernardus too.

750ml bottle into a goblet.

L: Clear chestnut body under an inch of almost-white, rather coarse foam. Despite the loose bubbles retention and lacing are both quite strong. Definitely on the light side for the style, but I'm enjoying it.

S: Fruit is front and center, with grape, pear, and apricot all showing up. Toasty malt is prominent as well, with some significant but not unwelcome alcohol character as well. Robust and enjoyable.

T: Follows the nose - fruity esters, rich toasty malts, and booze are the three flavor waves. Rather enjoyable, but not especially interesting in any way.

F: Lively and full-bodied, with lots of soft carbonation and some alcohol warmth. Pretty great for the style.

O: This is a style I don't drink nearly often enough, so it was supremely enjoyable to indulge in this one. That said, I think I prefer most of the other Trappist Quads to this one, solid as it is. Beers of Fame tick 205/250. Cheers!

330ml bottle, best before 07/2023. Poured into a tulip.
Look: Pours a murky ambery brown. About 2cm of slightly off white head quickly falls back to a thin film, not much in the way of retention at all.
Smell: A fair bit of candy sweetness to begin with, quite malty, a hint of banana, cherry and plum, some spice in there as well as a hint of alcohol. Smells pretty good.
Taste: Malty, the banana and allspice come through very quickly, possibly a little clove as well. There is some underlying maltiness and candy sweetness throughout. There are some dark dried fruits as well, a little raisin and sultana. A little alcohol as it warms up, but pretty well hidden.
Feel: It is pretty thick and heavy. There is a slight tingle of carbonation, but not enough to cut through the heaviness. A sweeter finish. Though this is all what I expected from the style.
Overall: A nice sipping beer. Good for a cold day. Pity it's summer here. Oh well.