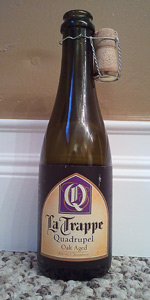 This way of aging ale results in a unique, complex flavour, which varies from one type of barrel to another. Quadrupel can be conserved for many years, and is a real treat for true ale enthusiasts. And this is yet another ale that continues to ferment after bottling, while its rich taste and high tannin content are likely to even surprise many a wine drinker!

Batch 28: This is the best quad by far that I have ever tasted. A smattering of foam around the edges and in the middle. Lacing that traces down the sides after being poured into a traditional Garre glass. Malty, peppery funk for aroma. Earthy smelling. All this comes through in the taste along with dark brown sugar providing a mild molasses bitter and a hint of buttery vanilla courtesy of the oak barrels . A hint of dried plum, raisin. Creamy mouth feel with tiny bubbles tickling through the syrupiness. This is absolutely artful to me. One of the very best beers I've ever tasted.

Look: Gentle Pour yielded hardly any head. I'm used to Quads producing a descent amount of head, hence the gentle pour. Lacing remains around the beer after sitting for 20 minutes. When held up to the light, this beer is a medium to light color brown, with quite a bit of sediment. Very foggy. 4.25

Smell: An amazing smelling beer. Tons of vanilla and oak. Dark fruits like figs and raisins are prevalent. I'm also getting a lot of tobacco from the oak. A slight burn in the nose from the 10%. Lovely smelling beer. 4.75

Feel: Slightly thick for a quad, which doesn't bother me a bit. Not much carbonation. 4.5

Overall: It's a great beer. I'm glad I got the opportunity to try it. I will say that the $17.99 I paid for the beer is not something I would be willing to put down again. But I don't regret it. Definitely going to be towards the top of my list of Belgian Quads. 4.5

Having this be one beer is something of a travesty considering how WILDLY different each batch is. Theblends vary from mostly wine barrel aged to mostly spirit barrel aged. A phenomenal beer in almost all regards but this one entry BS neglects the fact that blending mastery and variation batch to batch is what makes this so fucking fascinating.

D - A bit boozy but I like it. The cognac adds a nice touch.

Appearance: Pours a murky brown color. The head is less than a finger high, and off-white in shade. There isn't much head retention, nor is there a lot of lacing on my glass. (2.75)

Smell: Oh wow, the oak barrel is so buttery and so vivid. I've never really sampled a brandy barrel-aged brew before, but I really like the additional apple notes I'm picking up here. In fact, I pick up everything from all the barrels - brandy, sherry, port, and standard oak. Some of the base quad notes appear after opening up a little (figs, raisins, and cherries). All told, this is a beautifully delicate yet complex brew. (4.5)

Taste: The oak barrel creates a gentle sensation throughout the flavor profile, initially subsumed by the base quad's dark fruit flavors. More dark fruit flavors appear on the finish - mainly port-esque - with subtle touches of toasted oak appearing. I also get some flavors of chocolate, brown sugar, and caramel throughout. It's hard to explain, but this beer is just so mind-bogglingly complex that it's hard for me to explain everything going on here. Let's just say that - like the nose suggested - I can subtly pick up each barrel used in this offering. I get a little brandy, a little sherry, and a little red wine. This is just so big in all the right ways: there's so much going on here, and yet this beer isn't ridiculous or over-the-top. (4.25)

Mouthfeel: It's quite full-bodied and rich...yet the finish is quite dry. Still, despite the dryness, it's very much a slow sipper. There's so much going on in the flavor profile that I don't want to drink this easily. It's a bit boozy, though not particularly bothersome. What surprises me is how low the carbonation is - if it weren't so naturally dry, then it WOULD be bothersome. The fact that it isn't syrupy is a testament to the sheer brewing skill shown off here. (4.25)

Overall: This bottle was worth a LOT of money ($17!) - however, I can safely say that was utterly worth it. The barrel aging adds so much to the base quad without detracting in any facet. In particular, the complexity is wonderful. Trust me, a little bit of this will go a long way. Just plain fantastic. (4.5)

A pleasant fruit and oak smell.

The taste is a fantastic blend of sweet fruit and caramel. Offset by the oak yet not overwhelming.

This beer appears to be flat with no head. It is rich with dark copper to ruby highlights and no viscosity. The LaTrappe label can be read clear through from the opposite side of the chalice.

The aroma is dominated by rich dark fruits. Specifically, a ton of figs, plums and prunes. Molasses and brown sugar are also clearly present. With warmth, this closely resembles plum pudding.

Light holiday spices add to all the fruit noted above with some cherry added in. Booziness is mild, as is the finish and the sweet maltiness that threads it all together.

A creamy texture works with the light body. Alcohol is as expected with a modest bite and a light heat. Soft carbonation is barely present.

This makes for a great sipping beer for reading on a crisp, clear, perfect autumn day while a wood fire perfumes the air from a distance. It is exquisite with age. Thank you Meghann & Wayne.

Review from 3/2011 notes. Poured into a Black Raven pint glass. Pours a dark orange amber with tons of floating particles. Half finger head and lacing. Pungent fruit and phenolic aroma. Sweet fruit, sweet malt, raisins, grapes, banana, vanilla, phenolic flavors. Tastes great, but I don't really detect a strong oak flavor and it may be a bit on the cloying sweet side. An enjoyable quad, but at the price, I would buy one of the others out there.

375ml corked and caged bottle (batch 3) split with pmsawyer and poured into a pair of goblets. The brew appears a clear amber that is a burnt brown through the middle and orange around the edges. A big bubbly cap sits atop and recedes fairly quickly leaving some spotty lacing on the glass.

The smell is sweet like candy sugar mixed with a fruited element like dates, plum, prune, raisons and a bit of citrus. Some fruited quality blends into floral territory with brown sugar. There is a mild inclusion of oak and some herbs across the back as it warns up along with an increasing presence of the alcohol.

The taste is just as sweet as the aroma leads on. Candy sugar mixes with dark fruited quality and done herbal hops keep the sweetness in check in minor bitterness. The alcohol is warming with a mild solvent touch that never gets too exaggerated. Despite the initial sweetness, this really dries out towards the finish. A little bit of rindy orange zesty bitterness is the last thing remaining on the palate.

This is a medium bodied brew with a modest level of carbonation, it is big and enjoyable with a pleasant balance of character. The oak was not overly done, in fact it was pleasantly subtle and really worked as a background nuance that made for a top shelf experience. This is a solid example that is worth checking out. This ranks right up there will all the other quads that get a lot more fame and attention in the category,

A big Belgian ale with a rather surprising lightness to things. This means it's not too heavy in taste or feel, and even the high ABV, while noticeable, isn't in your face. A definite wood undertone plays through, my guess is white oak. All in all, a very enjoyable quad.

Deep maple brown. Lots of floating yeast. Weak head on the pour and absolutely no retention nor lacing to speak of.

Sweet malt flavor overall, lots of ripe dark fruits and brown sugar with a hint of caramel. Just a touch of earthy hop. Oak character smooths out the palate and balances nicely. Finish is strangely clean.

Full bodied, drying in the end from the alcohol. Low carbonation. Slick texture mid-drink and sticky in the finish.

This beer was a nice choice to aged in oak. Adds a nice smoothness and seems to balance the flavors a little bit. Complex and tasty but I think I enjoyed the non-aged version just a little more.

A - Clear and lighter in color for a quad like it's non-barrel-aged brother yet definitely different in color, this beer is more of a dark mahogany red with nice clarity. The alcohol causes the loose off-white foam to disappear almost immediately leaving little lace behind.

S - Toasted oak and spicy bourbon aromatics waft into the nose, overtaking the beer's otherwise complex-yet-subtle dark fruit nuances and Belgian yeast subtleties but never does it come across as boozy; its rich maltiness carries through with soft sweetness lingering in the background.

T - Despite the time in oak which clearly shines through the rich beer with fruit-complimentary vanilla notes and Belgian yeast-complimentary bourbon spice, the beer still remains much like it normally is. Dark fruit complexity flourishes from the rich and sweet maltiness, trailing off with just a kiss of floral hoppiness.

M - Far "skinnier" than its full-bodied other self, this beer has plenty of alcohol to warm the innards as well as thin out the big and malty feel for a robust but certainly consumable (though high octane) beer!

O - This wonderful tweak to a classic presents a beautiful bouquet of lush dark fruit complexities so common to the quad style while bringing complimentary subtle vanilla notes from the toasted oak barrels and bourbon whiskey-like spice that equally compliments the Belgian yeast undertones. A bit thinner than it's counterpart, this version smells and tastes like it's heavier on the alcohol while remaining the same. Complex though much of the nuance to the beer is lost to the age, it's a fantastic beer nonetheless!

12.7oz. corked & caged bottle poured into a stemmed glass. Batch #3 printed on the back.

(A)- Pours a deep yet pale mahogany, almost purple color that produced a nice foamy eggshell colored head with good retention. Some sticky lacing here and there.

(M)- A nice carbonation level and balance. Rich and complex in flavor. The oak aging really provides some nice woody spice notes into the overall profile of this.

(D)- An awesome Quad. A beer that is usually fairly rich to begin with, the oak aging really puts this on a whole other level of richness and strength for the style.