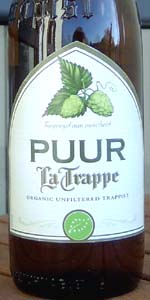 Notes: La Trappe PUUR is an easily drinkable, fresh, hoppy, light Trappist ale. Only top-grade organic ingredients are used to brew this ale. The recipe for this ale is the result of a combination of the continuous pursuit of the highest quality and a passionate dedication to ale, coupled with unrelenting respect for people and planet.
View: Beers | Place Reviews
Reviews: 36 | Ratings: 119 | Log in to view all ratings and sort

L- Quite pale gold, pours with very fine haze and a huge white head - I suggest you pour v slowly as this was well rested, chilled and handled with care.
S- Has the scent of a wheat beer, the typical mildly spiced notes.
T- Brighter than usual, but all the trad spice notes are present.
F- It's refreshing but quite light on feel. I can imagine enjoying it on a hot summer's day.
O- I's like a wheat beer, just a bit hoppier/brighter. Perhaps the somewhat lower ABV% reduces meatier feel and accentuates the hopping. Perhaps a tilt towards younger tastes these days? Perfectly drinkable, though wouldn't mind a bit more oomph in mid-winter! By 'lightending and brightening' it this Trappist beer has lost reason for me to buy it (again).

330ml bottle BB: 02-2021 Bought from BeautfulBeers/BurySt.Edmunds as part of a large pick-your own consignment to London.

O: Not anything I would drink again.

L - very clear, light yellow with a nice foamy white head.
S & T - good light, malty base with some nice, surprisingly heavy bittering (without being overpowering), and with floral green hoppiness and a hint of fresh granny smith sweet-sour apples.
F - nice and light without being too watery. Nice and fizzy. Perfect for the style.

O - I'd rather have this as a lawnmower beer over every and all currently available pilsners/lagers. Gloriously refreshing, summery, light beer.

I absolutely recommend this one.

Third of a litre at the Celle Beer Festival.

O: A thinned out version of a Belgian Pale Ale, almost a session beer.

Slightly hazy golden yellow with lively carb and a decent head of foam that leaves nice lacing. Full smell of grassy hops, hints of lemon, dough and yeast. The taste doesn't have as much flavour as the smell however. This makes it easily quaffable though, in a good refreshing way. Not a very complex trappist, but worth a try under a spring sun.

I suppose it is OK for the traditionalists (Trappists being mostly so) to experiment. But it is not in their DNA to change brewing and push the envelope. All of which asks for Purr: is organic necessary ? I've not read a convincing argument; primarily because boiling barley greatly reduces the ill-effects of pesticides.

To the point... Puur is a nice beer. Not powerful and complex like we expect from Trappists. It was so pleasant that I don't even give the rating a hit as I usually do for beers that promote their hops.
Should you try it ? Yes... should you find it.

Pours a murky light yellow-orange with a foamy white head that settles to a partial film on top of the beer. Foamy streaks of lace form around the glass on the drink down. Smell is of grain, fruit cocktail, earth, spice, and yeast aromas. Taste is much the same with grain, white grape juice, grape jelly, earth, spice, and yeast flavors on the finish. There is a very mild amount of bitterness on the palate with each sip. This beer has a lower level of carbonation with a slightly crisp mouthfeel. Overall, this is a pretty good beer that is light and simple all around.

This was a solid offering. The beer was clear with white head that did not lace. The scent was common for Belgian style beers. The taste was even and light....easy to dink. Overall its worth a try.

Tasted in a La Trapp glass from drafught at Firkin on May 29, 2015. Look is clear gold, medium head that fades and very little lacing. Smell is light with citrus fruit notes and lightly sweet malt. Taste is citrus and tropical fruit with a hint of banana. Feel is light in body with medium carbonation and a crisp, clean finish.

Had on tap at the Pig and Fiddle.
L: Pours brilliant gold under a ¼” white foam collar.
S: Light fruit and light malt with the balance to the fruit.
T: Big fruit flavors featuring pineapple, banana and citrus. F: Medium to medium light body, medium to medium low carbonation.
O: A flavorful yeast driven beer that is easy to drink.

Poured into a Duvel tulip. The liquid is golden-yellow, and surprisingly transparent for an unfiltered beer, even despite the moderate amount of sediment floating around in it. The pour kicks up a pretty ridiculous off-white head that leaves gorgeous smatterings of lace as it dissipates over the next few minutes.

Aroma is pleasantly fruity and crisp. Lots of light pilsener smells going on in there, along with a really nice compliment of light fruit from the hops. There's an undercurrent of yeasty esters adding some complexity and some depth to the fruitiness. Really nice aroma.

Flavor is similar, starting off with a nice crispness followed by a wonderful, understated, subtle fruitiness. There's a wonderful bit of slightly stinging hop flavor that is perfectly understated - As an American, I could never really call this beer "hoppy," but the hops are still there and biting. The hops also bring a really nice, if also understated bit of complex fruitiness, with a surprising tropical flavor. Underneath, the yeast brings in some more estery fruit flavors, along with an ever-so-slight bit of a barnyard flavor that gets more pronounced as it warms.

Mouthfeel is light-bodied and crisp, with lots of carbonation.

Overall, a really interesting and great beer. This is what I would imagine I would want if I was a monk and wanted an IPA. It's got really great hop flavors in there, but is so understated so that you can barely notice it. To be honest, if you're a hophead I think I would only recommend trying this after a several-week-long sabbatical from hoppy beers - otherwise, you might not even be able to notice the hops! But in true trappist form, they don't sit content with just the hop flavors - they bring in yeast to compound the fruitiness and bring in other flavors. And, of course, it is amazingly drinkable.

S: rather interesting, flowery hops, bread, and there is something I can't really place

O: descent cripsp lager, not much more to say

O - As as the style goes, this wasn't bad at all. This is a light, dry, but very drinkable beer. A bit watery and light for my tastes, but not bad if this is what you're looking for.

A: The beer is clear light yellow in color and has a low amount of visible carbonation. It poured with a short white head that quickly died down, leaving only a thin ring collar around the edge of the glass.
S: Moderate aromas of herbal hops are present in the nose.
T: The taste is similar to the smell and also has flavors of spicy hops and a light amount of bitterness and hints of pale malts. Notes of yeast are also perceptible. Bitterness and spicy flavors linger through the finish.
M: It feels medium-bodied and slightly dry on the palate and has a moderate amount of carbonation.
O: This beer doesn't match up to some of the better examples of the style but is pretty good considering it is organic.

A: Pours a pale and bit cloudy yellow colour forming a small bubbled white head. Low retention but with a thin layer that lasts for long time. Some few lacing left

Drank from my Ciney sniffer

A - Pours a pale slightly cloudy straw colour with a nice white head that reduces to a lacing film.

T - Up front some nice spice and hop followed by some spice and malt, the finish is a little watery.

O - At 4.5% this is a very good beer with plenty of flavours. Perhaps a little thin.

Beer bottle (33 cl.) purchased from La Cervoiserie and tasted in 2012.

Appearance: Light gold color, cloudy; thin white head that quickly dissipates.
Smell: Floral, like a Belgian white but on the lighter side; some hops.
Taste: Citrus / floral with a delicate bitterness, mostly towards the end. Hints of pepper.
Mouthfeel: Light to medium body; light to medium carbonation.
Drinkability: An interesting ale (“light” as compared to the rest of the La Trappe family) that could easily make for a good quality session beer, without causing too much excitement.

Pours a cloudy, pale golden yellow with a fizzy white head that quickly fades to a mere film on the beer.

The first thing I smell is some fairly potent hops, followed by smells of pepper, earth and wet hay. A little citrus and fruity sweetness rounds it out. It's reminiscent of a witbier but hoppier.

The taste, sadly, does not measure up to the interesting and powerful smell. While it's similar with grassy hops, a little spices and some lemon tartness it's watery in taste.

The mouthfeel, again, is a little thin and weak with not quite enough oomph to make this a light and easy brew or erase the watery feel from the brew.

Overall this beer started amazing but quickly went downhill when the taste just couldn't measure up to the promising nose. It's a shame because this beer could have been so much more, a more potent flavour and some stronger carbonation and this would have been one amazing light summer beer.

A pale, hazy beer with a white head.

Tastes rather bitter, slightly fruity, not unlike Duvel or the stronger belgian blonde ales.

Overall a good lager alternative, just not really my kind of keer.

Poured from a 330 ml. bottle into a wine glass, showing mostly clear and deep straw in color. Touch of haze at first, a thin cap offers moderate retention and good lace.

Aroma of light pale malts and a bit of noble hops. Belgian yeast notes are rather subdued. Noted oddly as a 'Category II' bier on the label, not sure what that means as the Witte was 'Category I'. Does offer a slightly expanded yeast profile with warming, though still light.

Taste is more along the lines of a Pils beer with a light grainy finish, and a bit coarse and chalky/dry along the way. Finish does linger well for the light body of the beer, with some lemony citrus and expanding yeast notes. Feel is light but expected for the light ABV, and in fact fuller than the ABV might suggest. Finish is quite smooth and easy on the palate with pale lemony grain.