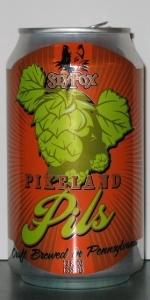 Interesting can that peels off like a soup can. My clumsy ass spilled it almost immediately so that kinda sucked but it’s super good other than that!

On tap at brewery:
Clear, medium light golden body. Head falls to medium ring, but it ebbs and flows with my sips, leaning a few spots and dots of lacing.

A nice white bread nose paired with a light grassy noble hop note. A little floral scent is also there, which comes through mid taste. The bread character from the nose didn’t transfer immediately to the light-bodied sips I took. The noble hops come through quite nicely in back, though, and seem to bring out a little bit of an herbed focaccia flavor.

Quite light and easy going with a somewhat bitter ending - works for me.

A: pours an ever so slightly hazy straw gold with beautiful streaming carbonation and two fingers of white head that fades to 1/4 inch and retains very well. Some spotty lacing.

S: Pilsner malt, spicy noble hops. Loving the smell of this Pilsner. I’d put it up there with the best I’ve had.

M: light, highly attenuated. Exactly as a German-style Pilsner should be.

O: great beer. It’s been a while since I had a German Pilsner, particularly one that comes off with this kind of finesse; crisp and the hops are not overdone. Would buy again if it were available in my area. Good craft lagers are hard to find.

My first from Sly Fox, their website indicates a Pennsylvania brewery that has been around for a while with, now, a second brewpub and several cash cows... among which Pikeland Pils is one of them.

I have to say Pikeland has average Looks for a Pils (it is unfiltered and an off-beat cloudiness.) Smells and Tastes are classic, mostly malt with grassy and bitter hops keeping the sweet in check. Sits OK in the mouth. OA: probably not distinguished, but then the style is designed that way.

not much on the nose. faintly malty.

slightly bitter and sour over a solid malt background.

medium on the mouth, slightly bitter on the finish,

overall, although German pilsners aren't really my thing, this is an okay drink.

Decent look for a pils I guess. See through with a white head and a very light golden color. Smells like a pilsner, bready and beery malts mixed with some noble type hops. There is more here when I take a swig, bready malts combat with slightly biting hops and it end slightly sweet then bitter. Drying finish and well carbonated on the mouthfeel. Overall this is a good take on the pilsner style.

Solid pils that pours pale straw colored with a touch of haze that settles out. Fluffy white head that doesn't rise as much as I expected. Smells of pale malts and grassy hops. Taste is light, baggutte-like breadyness graced by subtle peppery hop flavor. Sweet and bitter with good balance. Crisp and clean finish to this light-bodied refresher.

As good as an US Pils. Hard to tell them apart without a blind tasting. Great in summer.

Appearance: Pours a clear golden color with visible, persistent bubbles, and a thick sub finger head that doesnt last or lace much.

Taste: Starts with the sweet, citric, and lemony aspect and becomes crisp with a bright noble hop finish. Bright, ample.

O: as good as the best such as Victory.

On-tap from a sixtel keg.

Straw gold with brilliant clarity and a large, creamy white head. Light bready Pils malt that gets overshadowed by spicy, floral hops. Mild sulfur, but nothing that detracts from the quality of the beer. Hop bitterness really comes through in the flavor and dominates. Clean, bitter, and crisp. Light bodied with good carbonation. An easy drinking, hoppy pils that makes for a refreshing beer on a hot day.

Medium body with lightly tingling carbonation on the tongue.

A very, very good take on the most basic lighter lager. It's not special or different nor is it trying to be. Just solid across the board and very sessionable. Easy to lose count throwing these back on a hot summer day.

Can dated BB 27 July 2015 at 40 degrees into a weizen glass (don’t have a pilsner glass)
Aroma of floral hops
Head large (7 cm, aggressive pour), white, frothy, diminishing to an irregular dense layer 0-9 mm thick with rocks.
Lacing OK – large irregular islands and archipelagoes of tiny to medium bubbles covering about 50% of the interior of the glass
Body light yellow, clear
Flavor begins with a dry bitterness which morphs into a slightly sweet dimethylsulfide while the bitterness hangs as an after taste. No malt flavor, no alcohol, no diacetyl.
Palate light to medium, dry, lively carbonation

The beer pours a nice white and foamy head that keeps for a while. The beer itself is a clear medium gold color. The appearance looks decent but nothing awe inspiring.

The beer smell is fairly earthy and hoppy with nice bit of bready maltness and sweet pale malt as well. The hops are of two kinds. One has a nice earthy and bitter note to it while the other is sharp.

The beer taste contains the same notes as the smell but that the taste has more balance. The sweet pale malts are much stronger than in the smell. The hops are still earthy and bitter. Also, has very bitter aftertaste.

The beer feel is a bit heavy for a pilsner but still refreshing. Leaves a dry aftertaste.Biting carbonation but not a lot.

Overall, a decent pilsner and worth getting. This one was bought towards the end of its shelf life but it still gave me a good experience.

355ml can poured into a tulip glass.

Look: Slightly cloudy yellow with a fluffy fingers-width of head.

Smell: Well, it smells like a German pilsner, that's for sure - hops, honey and more than a hint of mown grass. Quite a fresh, 'summery' smell. Just the sort of thing to lift the spirits in the middle of a typically dank British winter.

Taste: Not quite sure what's going on here - most of the smells apparent in the smell aren't there in the taste. Definitely a honey-sweet kind of taste up front with dry hoppiness coming in in the aftertaste. Quite unlike any other pilsner that I've had, but not at all bad for it. Crisp and fresh.

Feel: Again, very crisp and fresh with a dry finish - oddly, there's no overt hoppiness here. Even so, I could well imagine enjoying a few of these during the hotter months.

Overall: I'm trying to think when I last had beer from a can and I honestly can't remember. What I do know is that it wasn't nearly as good as this. Cans seem to be making a comeback and if this is typical of a canned craft beer then bring it on. Calling this a proper pils is probably wide of the mark, but as an American interpretation of same it more than stands on its own merits. Well worth tracking down - it'd make a superb summer drink.

Can from MrBarleywine, thanks for the opportunity Mike!
Just a touch of haze in a deep straw colored liquid, topped with a creamy bubbly bone white head that persists forever leaving lots of stickies on the sides of the glass. Crackery bready malt aromas are nicely balanced with a bit of spicy floral hop. Light sulfur rounds out the nose. The flavor is rich bready crackery pilsner malt with spicy hop to counter. Slight metallic flavor towards the end is a bit off putting. I can imagine that this was a better beer when fresher, but I just noticed that this can is best by July 2014. Still no excuse for the metallic flavor. I will rate as is and hopefully get a chance to sample again.

T- Clean malt flavor, a little spicy, a little earthy and floral. Malt is a little grainy, but very nice.

M- Light, very crisp. Rather clean finish. Just a bit dry, enough to beg for another gulp on a hot day.

O- Very tasty and crisp. Well done Pils, especially by an American brewer. Well deserved to be an award winner.

My beer guru picked up a variety pack of Skyfox and this is one off the ones he left for me. No recommendation one way or the other so Not sure what to expect. Decent looking beer for a pils. Surprising taste, as a non fan of pils, I actually enjoyed this one. I have a couple more of Skyfox and I now have a little expectations. Good beer.

Has more of an orange IPA appearance than the normal yellow/straw color of other pilsners I've seen. Nice puffy head with lots of carbonation and great retention.

Taste - Taste was a little off putting at first and not really sure what flavors I'm picking up here. Perhaps a sweet cracker kinda taste? After a few more sips, I've gotten used to this unique flavor profile on a pilsner and its sessionable. Has your typical dry/crisp finish for a pilsner. I'm really not picking up much of the typical Noble hop flavors in this one.

Mouthfeel is fine for a a cold summer beer.

Overall - Its a fine beer. Not the best flavor profile representative of the style, but is still a good summer brew and enjoyable.

12oz can. Pours a translucent stray color with an inch of head. Minimal lacing. Aromas of toasted malts, grassy hops, hay, and sweet bread. Lots of malt flavor at first followed up by some of the cut grass. Toasted bready malts with hints of wheat and hay. Finishes with a light bitterness along with some floral notes. Good amount of body with lots of carbonation. A can of this is perfect for the summer. Overall, worth getting again.

Poured from the can into a pilsner glass, this beer was a hazy yellow color with a small white head.

Aroma mostly floral and grassy. There was a tiny bit of citrus, and an even smaller bit of spice.

Taste of lemon and grapefruit. Flowery. A bready background. There was some late pepper.

A hoppy and refreshing pilsner. Would drink this again.


Pikeland Pils from Sly Fox Brewing Company
Beer rating: 86 out of 100 with 735 ratings