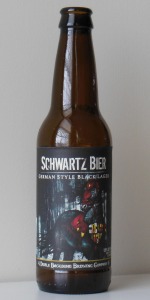 We like this beer for lots of reasons. It’s a traditional old world beer style and it’s a lager, so it takes time to make but it also has roasted & toasted malt flavors. And while it’s light to medium in body, it’s black with a quick, crisp finish. Add in six imported malts and two European hop varieties, you’ll taste why this true to style DB favorite is an award winner!

Lovely mocha taste. Not heavy. Light, malty, chocolate with a hint of coffee. Direct from the bottle so color im assuming is black. Nice beer. Easy to drink without being heavy.

Quite dark, but clearly light bodied, and has a small, creamy khaki head with good lacing.

Quick hit of chocolate sweetness up front that quickly dries out with ashiness, coffee, and metallic bitterness. The finish is clean and dry.

Seems like a great example of the style to me. It’s light, yet rich, sweet, yet dry.

Great example of the style, nice dark roast black coffee with a crisp bite. In the times of pastry stouts, and milk shakes this is a under rated style .

A: dark black in the glass with a soft tan head.

O: overall not a bad brew.

Pours a dark brown with a thick, tan head that is slow to fade away. Smells of roasted malts, brown bread, and caramel. Taste is light coffee, slightly sweet, smokey, with a little bit of hop bite binding it all together. Medium light body, moderate carbonation. Nicely balanced beer, a little hop, some smokey malt and an easy drinking ABV, certainly nice for a craving for a dark beer during the warmer months. I'd buy it again.

Dark black pour with even lacing that doesn't stick around. Low viscosity and lighter colored head are what tells you it's not a porter. Smell is roasted, bready, slightly sweet - German brown bread.

Tastes almost smoky, roasted. A burnt sweet, almost caramel. The hop balance on this is very well done. Mouthfeel is a bit thicker than I was expecting but the hops give it an almost tannic quality that balances things out on your tongue. Gets some syrupy qualities to it towards the end. Carbonation is light to medium.

Overall a unique style and a tasty beer if you like a smokier style, although this was not as light as I expected.

A simple beer that's good when you're wanting a refreshing dark beer. Dark black in appearance with a white head. Taste is breast, roasty, very, very light chocolate on the on the back end. Good for the style.

Undated bottle into pint glass. Pours a clear dark ruby brown with a thin light-tan head. Initial impression is a very flavorful, roasty, slightly sweet, with a hint of coffee. Mouthfeel is medium and refreshing; carbonation is perfect. Finish is roasty and semi-dry. Very enjoyable.

Appearance: Arrives coffee colored with a thin cap that fades to a ringlet leaving a few strands that hang around

Smell: Brown bread with hints of chocolate, caramel and nuts

Taste: Brown bread tones lay down the base with caramel sweetness building; some chocolate and nut flavors through the middle with a clean lager finish

Overall: Nice to see the occasional Schwarz out there; not the best example I have tasted but certainly passable

Pours dark brown with clear ruby highlights in the light. Tan head, decent retention, nice lace
Smells slightly roasty, slightly smokey, with a nice underlying bready malt
Smokey and bready, with a hint of roast. Did they use rauchmalt in this?
Nice mouthfeel and carbonation
The smokiness is nice, but not to style, so it got dinged for that

L: This brew displays a deep black colour with a thin and lacy head. When held to the light, dark brown hues shine through my standard pint glass.
S: A very sweet aroma is prominent with notes of coffee, vanilla, roasted malts, toasted bread, and perhaps a hint of dark chocolate.
T: Coffee and roasted malts hit the tongue with plenty of flavor. It is soon followed by a mild fruitiness, and finished with hints of dark chocolate.
F: The brew is light and refreshing, giving it the perfect qualities for a hot day or a lighter beer during the winter.
O: The beer leaves you with a very tasty and smooth finish that leaves you refreshed. After my initial glass, I wanted one more!

I was at Costco. Precious likes a type of Moscato that they have in the blue bottle. She won't drink anything else. She's funny when she's had a little alcohol so when I was getting her wine, I noticed a combination pack of Devil's BackBone so I picked it up. One of the beers was Black Lager.

Oh, it's beautiful. It pours out a rich dark color like Wendy Williams' thighs. I have a thing for her. The smell is unremarkable, but the taste is just the perfect dark beer taste that I've grown to love over the years.

From the bottle, it pours a dark, black color with a tan head. The head soon diminishes to a ring. Definite roast malt in the nose. The same in the mouth - nice!

L: Poured from a bottle to a pilsner glass. had a dark brown / black color and a thick texture. There was a thin, tan-colored, long-lasting, foamy head. Below average lacing.

S: A good aroma of roasted malt, chocolate, and a bready quality.

T: Tasted of some chocolate notes (could have used more in my opinion), a lot of roasted malt, the aforementioned bready quality, grain, and a tinge of coffee as well. This is one of those flavors that would be great, if only they pushed it just a bit further. Tasty, but almost too subtle for its own good.

F: A solid amount of carbonation with a dry finish. Medium-bodied.

O: While this beer has its flaws, it's definitely drinkable. Worth a look.

Pours almost black with mahogany edges. It started with almost one finger of tan head that diminished to a nice half finger cap with fine lacing. Weak nose of roast and sweet malts, maybe chocolate or dark fruit. Tastes mostly malty, roast and caramel malt. Slightly sweet with just a bit of bitterness and a mostly clean finish. Light bodied but not thin, with decent carbonation. Crisp and easy drinking. This is OK, but not great.

Had a really good local lager last week that’s turned me back on to them after a time away, so I snagged this out of the fridge. 12 oz. bottle.

Poured into #properglassware, my old Devil’s Backbone glasses from a BIF who knows how many years ago - they are well loved. Pours on the darker spectrum of brown. Light roast, chocolate, & black waybread in the nose.

Devil’s Backbone Schwartz Bier! Really, all this reminds me of is the mugs of big black beer we had to use both hands to lift & swig at U Flecku in Prague. Mimics the nose like a mirror, with the exception that the black bread has now been well toasted & I could identify the lager yeast in the dark. Clean, light, easy to drink, this is exactly what I was looking for.

No dabbing or bat-flipping here, just a good, solid lager.

Last bottle of this one from my Christmas six-pack -- bottling date is November 1st, 2016 so just barely over two months old.

Pours a dark brown, settling into a nearly black color once in the bottle -- can just barely see some dark brown around the edges. Shining a light through makes the streams of rising bubbles visible, must be pretty clear despite the darker color. Nice big layer of light tan foam on top at first, which has now shrunk down to a thinner cap but still looks pretty nice. It's leaving behind really nice rings and lacing on the inside of the glass as I drink it, too.

Smell is roasty dark malts right away, with maybe a tiny bit of sweetness hiding in the background. A bit chocolatey, I'm especially noticing this aspect of it when I sniff the now-empty bottle for some reason. Maybe a little bit of a metallic-seeming thing in there, which is unfortunate; I don't remember noticing this in previous bottles I've had, though, so that may be the glass rather than the beer.

The taste is also primarily roasty dark malt. It's quite dry, not really getting any of that background sweetness that I picked up a bit of in the smell. There's a kind of woody/chalky/almost smoky thing in the background that mixes well with the other flavors. Smoky/char is probably the best word for it. Kind of a dark bread and grain aftertaste. Some nuttiness going on in there, too. Unfortunately I do occasionally pick up just a bit of that metallic thing I was getting from the smell, but it's not strong enough to throw off an otherwise very tasty beer.

Mouthfeel is really nice -- it's got that soft bubbly thing to it, feels light but substantial and very easily drinkable.

Overall, this is another beer from Devil's Backbone that's readily available and consistently good -- and in a style that's difficult to find around here, no less. I'll have to have it again in the not-too-distant future to see if that metallic thing I was picking up in the smell (and slightly in the taste) was just the fault of the glass I'm drinking it out of or my nose doing something weird; that's honestly the only thing I found any issue with in this beer, and if not for that my smell and taste ratings would both definitely be a bit higher.

A: This poured a nearly opaque black with a bit of white head.
S: It smelled like coffee and roasted barley.
T: It tasted like earthy roasted barley and coffee grounds with a little creamy wheat. It had a clean bittersweet aftertaste.
M: It was watery with moderate carbonation. Decent body.
D: This was a decent schwartzbier. It had a nice clean scent and taste, with a good body and mild finish. So it was easy to drink, even though it's not my favorite style. However, there was nothing special about it, so it was pretty forgettable.

Pours dark walnut brown. Tastes and smells like a light lager with a little more roastiness to it -- there are hints of caramel and burned marshmallow, maybe even a hint of smoke. Yet it's light and clean, with a dry finish.

tried this on tap at BWI -served in a willybecker.

The color is very dark brown with black coffee appearance with opaque clarity thin tan head with very fine bead lace clings well. The smell is cocoa-like with slight roasted coffee and mild mineral yeast with roasted barley dominant in the aroma. The feel has medium body with moderately low sweetness and mild roast with semi-dry yet clean finish.

Taste has a good malt flavor with mild sweetness in taste combined with slight roasted barley and subtle hop in the back with more of a bready taste with toasted maltiness as it finishes dry. Overall a smooth lager as it should be yet nice amount of roast which is not burnt or bitter. This fits the style well I would drink this frequently if available locally.

Schwartz Bier from Devils Backbone Brewing Company
Beer rating: 86 out of 100 with 379 ratings