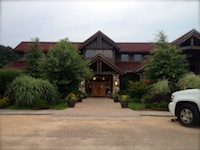 Rated by vabeerguy from Virginia

4/5  rDev +0.3%
vibe: 4 | quality: 3.75 | service: 4.25 | selection: 4.25 | food: 3.5
Situated at the base of the mountain before Wintergreen Resort. In a valley area with views of the mountains on all sides. Nice sized complex with just about all you need for a relaxing day. Inside bar and restaurant, outside bar and restaurant, building with spirits and cigars, place for Sunday brunch with coffee, and a building in the works for a distillery.

Spent most of our time outside. Lots of seating and plenty of grass for the kids to run around on. Nice, relaxing place to spend an afternoon. Service was pretty good,with a nice, varied selection. Nothing about the place stands out as world class or anything in particular to seek out, but it was pleasant enough to just chill.

3.26/5  rDev -18.3%
vibe: 2 | quality: 3 | service: 3.75 | selection: 3.5 | food: 3.5
I knew this place was big, but I didn't realize just how big. It's huge, actually. Almost looked like a theme park when we drove up, and the sheer volume of cars in the lot did not bode well for us. So, there's the main building, which is lodge-like: crazy crap on the walls, and taxidermied animals everywhere. Outside there are tons of seating areas, with a fire pit, a pet area, a private room for parties or something, and even what appeared to be a large stage for bands to play at. Out here, there is a separate bar, where, in typical bureaucratic fashion, you get your hand stamped and stand in line for beers. Across from this is a small BBQ snack bar. This is apart from the main inside restaurant. The clientele here was extremely weak, and the vibe was even weaker. A mix of preppy brosephs and brosephines, and terrible oldheads. Kids running around everywhere. I actually saw people drinking Budweiser, which is depressing. We put our names on the list for a table inside--40 minute wait, which turned out to be 30 minutes--and just hung outside for a while, "enjoying" the bad company. Normally I would've just gotten the heck out of there immediately, but with the 2yr-old in tow, we needed to stay for dinner.

As for the beer, there was a good selection, I think maybe 15 or more on tap, with a good range of styles. You can get samplers, which is good, but you can't actually pick your samplers, which is dumb. You have to pick one of three different pre-set flights, instead of actually getting the beers you want. So I ended up just getting 3 full pours, an IPA, the cranberry gose, and a coffee imperial stout. All were forgettable.

On the plus side, the service was pretty good. I mean the place was slamming busy, but aside from the initial wait, which really couldn't be avoided, our waitress was on the ball, and the food came out relatively quickly. Speaking of which, the food was...okay. I had the brisket special, which was good, but at $19 (no price listed), it wasn't really that "special." My wife had the fish & chips, which seemed all right, and they have some kiddie selections that are pretty basic.

Overall, this place is a bomb. I would never go back for any reason. Now that I've visited them, it's pretty apparent why a place like this would sell out to big beer, and it's really no big loss.

Rated by crenegar from New Jersey

Reviewed by oldn00b from Virginia

Reviewed by Beerasaurus from Virginia

3.96/5  rDev -0.8%
vibe: 4.5 | quality: 4.25 | service: 3 | selection: 4.25 | food: 4.25
Visited on a mid-summer Thursday evening. Medium busy but server said it was a lot busier than expected. Seated right away but waited about 15 minutes for server to stop by. Not in a rush but would have been nice to get a drink order in. Service was friendly and good after initial slowness. Food was excellent. Would def try again. Hopefully they will have enough staff.
Jul 17, 2015
Rated: 3.91 by brocktune from Virginia

4.31/5  rDev +8%
vibe: 4.25 | quality: 4.25 | service: 4.25 | selection: 4.5 | food: 4.25
Great restaurant as well as brew pub. Packed with people having a great time. Many there for food as well as beer. Good bar with liquor and wine well supplied as well.
A bit disappointed that "flights" were fixed. So I skipped these. However, they had "shorties"/half pours. So sampling was still very easy, affordable and not toxic if you wanted more than a few.
Surprised and very happy to see so many "one offs" and variants on the tap list. All were great. Examples we tried included very good versions of Dbl Amber IPA, Imp Coffee Stout, Tart Saison with Cherries and a very nice steam brewed Tripel.
Nice eclectic menu of appetizers, sandwiches and entrees. Everything we ordered was well prepared, attractive and delicious.
Had a great time and wished I could have stayed longer.
DB is truly in the middle of nowhere, but very worth the drive.