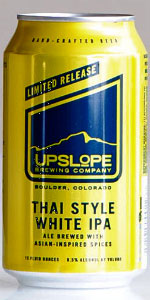 Pours a completely clear-as-day golden color with a very retentive head that leaves behind some spotty lacing and has solid legs for what it's worth. This beer has a bunch of spices in it that could definitely render the appearance null and void, but it somehow manages to keep everything intact, and it looks quite good while doing so. I'm a little confused why it's super clear... I always associated white IPAs (ya know, when they existed...) with haze, like a hoppy witbier or something, so... maybe this isn't great when it comes to being a stylistic representation of BIPAs, but it looks nice as a beer in and of itself. Not sure how to rate this one, but I'm just gonna go ahead and give it what feels right.

The nose is heavy on citrusy hops and ginger, that's for sure. They also list lemongrass, Thai basil, and coriander as adjuncts, and I guess I can sense some of the lemongrass but a lot of the other elements are a bit obscured. There's a little bit of funk and tangerine peel with lighter notes of stone fruit (apricot and peach) as well. This is a bit plain and normative, honestly, but it does the job. I wish it were maybe a bit more aggressive in the hop department, for example, as it doesn't even seem to let the spices take the lead.

On the tongue, this beer is a touch bready and yeasty, with a cautious approach to its hoppiness. There are some light notes of grapefruit peel, coriander, and lemon zest, but a lot of what's happening here seems weirdly muted. I think they wanted to be sure everything balanced correctly, but it seems so overly-safe that it ironically loses a bunch of character that it by all means should have had. Still, this is really drinkable and would probably work with plenty of different cuisines, as it's definitely identifiable as an IPA but doesn't really have the bitterness typically indicative of the style. That makes this beer uh... pretty good, but not spectacular.

A straw-golden colored body with slight chill haze, and a fluffy head of 1/2 finger leaving slight hilly lacing up the sides.

I get a nice nose of coriander, citrus peel, lemongrass, ginger, clove, and slight dill. There's a hop bitterness there in the nose too but I can't quite pin it down.

Feel is carbonated, faint creaminess that's canceled out by the hop resins, which carry to the finish. A dry parch remains on the palate.

Overall, a very interesting take on a white IPA. I wish more breweries did this. This is the 2nd Thai style IPA I've had, and the better of the two was from Around The Bend called Silk Road. Interesting trial if you can get ahold of this one though.

Smell- Slight banana. Almost reminds me of a hefe. A little too mild. 3.75

Taste - Strong grass up front but I'll be damned if this is not a belgian white blended with an IPA. Orange peel finish. No bad characters. 3.75

Overall - Well crafted beer, especially for a limited release. Many brewers put on the same beer for years and can't get them this good. Genuinely suprised by this. 4.5

I'd expect this will get negatives from quite a few folks, as it's quite different from any other IPA I've had. But I think it's pretty good.

Smell: 4.0
Smells of hops and spices. Like some Belgian IPAs that I have had. Smells l ike there is quite a bit of coriander in with the other spices.

Taste: 4.5
Tastes like a Belgian IPA. Some bitterness up front, then a touch of sweetness just before the spices blast in. A touch of heat from the spices. Some cracker/biscuit. The spices taste like clove, coriander, ancie, turmeric, nutmeg, black pepper, and ginger. There is a lot going on here. Very flavorful.

Feel: 4.0
Medium bodied. Even though not many bubbles are evident in this one later on in the drinking experience, it still seems to have an effervescent tingle.

Overall: 4.25
Very interesting IPA. Many flavors melding together here. Should try this one for sure. It is not something that I would drink every day, but it was very enjoyable.

Reviewed by erk0607 from Colorado

3.36/5  rDev -9.4%
look: 4 | smell: 3.5 | taste: 3.25 | feel: 3.25 | overall: 3.25
Look: Golden amber with an off-white, super fine head that lingers.
Smell: Stir fry and hops. Definitely a peppery, funk that transcends a saison that was in an asian kitchen.
Taste: Bitter hops, curry spice, perhaps some orange zest. Much like the smell, there is a straw funk crossed with IPA that comes through.
Feel: Medium-light body, super fine carbonation.
Overall: Not a fan of the flavor, though it does all go together.

Reviewed by Impetuous from Montana