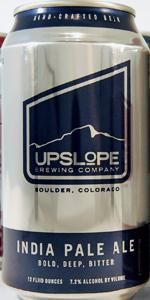 This is a good IPA. Crisp, citrus, tastes balanced and delicious. 3x 12 0z beers in and it tastes just as good as the first one. I would be happy drinking this everyday.

A - Nice fluffy off-white head. Pour is strong three finger. Brew is murky amber color with browns and reds... Looks nice. Could also be described as a freckly-ginger head...

S - WOW. This brew is sooo much different fresh vs. older. It really falls off quite a lot. Lots of pine and caramel. Also, tons of fruity cloves. Not your typical IPA scent.

O - A bit all over the board. This brew, along with all UpSlope brews, could stand to be more aggressive. This brew is borderline an IPA more of an aggressive Pale... Nice brew, could be awesome with some tweaks.

Well, it's been a few months since I've gotten a new review in after a hiatus to China. Took some good notes though, and figured I'd start inputting my backlog of reviews while having a brew. I just moved out to Colorado, so I thought I'd pick up a brew that is new here as well. Upslope is the newest craft brewery in Boulder, so I grabbed a sixer of their canned IPA.

Appearance- Pours a very dark, ruddy amber, almost pushing a light brown. Quite dark for a single IPA, but a solid two fingers of creamy off-white head rise up off the body and stick around for a bit before dying back to a sheet across the top. Some mild lacing as well.

Smell- Nose is pretty solid, with a mixture of grapefruit rind and piney resins coming through pretty strong. Simple and flavorful smells and a lot of them.

Taste- Hmm, I have mixed feelings about this one right off the bat. Very little in the way of any of the grapefruit coming through on the palate, but a fair amount of piney hop resins. However, there isn't much of a real hop bite as there is a very evident malt backbone that comes through on the finish. Ends with some caramel and bready malts.

Mouthfeel/Drinkability- Mouthfeel is nice and slick and the beer went down quite easy.

Overall, a pretty decent offering from a startup microbrewery. If this were an English-style IPA, I would understand the strong maltiness a bit more. However, it seems a little out of place here. Not bad by any means though and worth a shot if you're looking to try a new IPA.

Fine pungent floral and earthy hop aroma with bread and biscuit. Hops are the more prominent.

Great malt start with a wonderful bitterness at the finish. Grand hop character yet well balanced.

Drank from a can in Steamboat Springs, CO. Drinks very smooth with moderate carbonation and a medium body. Citrusy hops and a strong malt profile. A very balanced IPA which makes it quite drinkable, especially considering the 7.2% ABV. At only 65 IBU, I could use a little more bitterness. Still, this is a solid brew and very tasty. Probably more accessible than most IPAs on the market these days. Cheers!

S - Mild citrus with a caramel/malt background. With a tint of breadiness.

T- The patagonia hop is a bit more mild than any chinook or cascade choice that most breweries would pick for their IPA's. Upslope did a nice job with the hop schedule in this to make it bitter and nicely aromatic. The malt sweetness comes through. I would classify this as a pale ale rather than a IPA. The hop aroma isn't quite there. The aftertaste is a little cloyingly sweet with the bitterness makes you want a little water to wash it down.

M- Smooth, a little oily on the palate.

D - Overall very drinkable, but I'd bring it camping or to the softball game rather than pair it with any food.

Appearance: With an aggressive pour, a monster beige sea foam froth forms, resting on top of a deep amber colored beer. The beer is a little bit hazy and there are a few flecks of particulate matter at the bottom of the glass. Spiderwebs of lace coat the sides of the glass.

Smell: The aroma has a dry bitterness with a strange aroma that reminds me a bit of sawdust. Some peat and and other earthy notes combine with a light caramel sweetness and medium strength grain character. This smells much more English than American IPA.

Taste: The flavor is also consistent with an English IPA. A full grain flavor is most noticeable with just a bit of caramel sweetness. There is a lot of earthy, peat, and moss character that leads into a long, full bitterness that lasts through the finish.

Mouthfeel: This is somewhat dry, especially for an IPA, with a body that drinks right around the 7% ABV. The carbonation is fairly standard in magnitude and creamy smooth. There is no real lasting bitterness or hop residue. If anything it is a little bit grainy and has a mineral character to it.

Overall: The flavor definitely surprised me a bit as I was expecting more of a West coast style IPA, but I thought this was a well brewed beer. I would be interested in having it again.

Poured into a SlyFox pint glass.

First sip apes aroma, sweet malt backbone with a good balance of a firm bitterness with citrusy hops. Good bitterness and grapefruit on the finish.

Mouthfeel is a little thin, but not watery. Firm bitterness just barely creates a slight puckering. No astringency.

Overall a very nice, straightforward American IPA. Nothing too brutal about it. Could easily put down a couple three four of these after a long day.

12oz can.
A) Pours with a two finger head. Takes awhile to settle. Big bubble and sticky lacing. Hazy body. Amber in color.
S) Earthy hops. Some light caramel aroma. Grapefruit.
T) Robust hops upfront with a mix of malty sweetness. Toasty notes. Caramel. Grassy. A lingering hop bite in the finish and beyond.
M) Thick. Medium to full bodied. A tannin-esque feel.
D) A decent IPA. Doesn't stand out vast number of IPAs, but I'd drink another one.