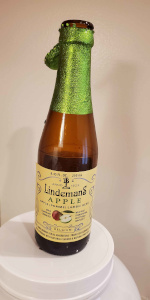 Notes: Making apple beer goes back to ancestral tradition. The Celts drank it in abundance during their harvest festivals. All we have done is extend the pleasure to the present day by adding the juice of several varieties of apples to our delicious lambic. The tasting experience, which is quite exceptional, combines the sweetness of cider with the sourness characteristic of lambic. The Americans are crazy about it, which is why they say, "An apple a day keeps the doctor away".

View: Beers
Reviews: 348 | Ratings: 815 | Log in to view all ratings and sort
Reviews by TheLongBeachBum:

Presentation: 355ml (12 fl.oz.) cobalt green bottle sealed with an embedded cork and Lindemans logod crown cap, all covered in a Granny Smith colored metallic green foil. It has a very traditional looking yet generic Lindemans cream colored label. Pomme Lambic is the name, yet quirkily it is also referred to as a Malt beverage with Apple Juice and Natural Flavor added, which destroys the traditional setting and sits it firmly into the commercial arena. No strength or best before date but a recommended serving temperature of 38-41 Degrees Fahrenheit.

Appearance: Light golden body. Soft white head remains at ½ thick throughout. Gentle lacing with a bold carbonation supported by a resilient pack of streamers throughout, the champagne factor is prevalent in the looks.

Taste: Sweet apple skins, Granny Smith bites with a high artificial input from synthetic apple juice. Forced and far from real, the reproduction tastes are of adjuncts, imitation juices and Enumbers. Lacks sharpness, which I would expect from a real lambic.

Mouthfeel: Champagne Charlie with an apple soda base which helps to promote the fizz to a manageable level.

Drinkability: The sticky sweetness is too much, the fizz belligerent and the overall artificial character is dominating. 355ml is just about the limit.

Overall: Nothing repulsive. Absolutely no beer base, and it definitely is not a lambic, it is.well, erm.nothing more than expensive Apple Juice. A chick beer hands down. Nice enough, but I find it hard to acknowledge that I am even writing a "beer" review for this alcopop. Shockingly predictable, just as I imagined.

From Cervezas belgas, Almuñecar. Fine but more boring than other lindemans fruity variants.The apple notes are soft yet noticeable, and the sour lambic part is totally hidden. More like a carbonated apple juice than a beer

- Pours a nice large fluffy white 4 fingers of head down to a light pillow and large soapy ring of lace... a nice ultra semi-cloudy golden bright and thin yellow, straw.

- Too candied and sweet... nice apple touch, but rather tart which is good... but the sweet backing kind of kills it... though it is a Lambic, and that is the style. Drinks very well.

Appearance: I almost expected this one to be green, considering the looks of the bottle... On o more serious note, it's bright orange, almost yellow, and very hazy. A decent two fingered white head settles into a nice long-lasting coat of foam and leaves some fragmentary lacings.

Smell: Apples, apples, apples, and maybe a hint of artificial sweetener and sour aromas. Although the smell of apples can be quite nice and refreshing, this one is not. It mainly smells synthetic and candy-like. If I would use one term to describe the smell of this one, it would be sweet and sour soft apple candy. Even though it's kind of a unique smell, considering it's a beer, it's not that not pleasant.

Taste: A very prominent taste of apples up front... no surprises there. The synthetic character is played down a bit in the taste, but it's still there and the beer still tastes very much as apple candy. It's reminiscent of sweet apple cider. It's very sweet at first, then a slight sourness and some faint malty flavors take over for a little while. This is actually not a very pleasant part of the taste, since the faint malt flavor mixes badly with the overly sweet taste of apples. The finish is primarily sour, but also a bit tart and sweet. Again, the taste of sweet and sour soft apple candy appears. The sourness definitely adds to the brew and makes for a pleasant aspect of its overall profile. But after a while, it feels like I've eaten to much candy.

Mouthfeel: Actually quite good. It's medium-bodied with rather lively bubbles, that go well with the sweet and sour taste.

Drinkability: It's a bit hard to review this one. As a beer, it's rather unique since it tastes more like apple juice or apple cider. As an apple beverage, it's quite good, and if I would be in the mood for something sweet, like cider, I would definitely choose this one over most ciders I've tried. (But one bottle of it would be enough though for one night - it's too sickly-sweet for a second.) However, if I'm in the mood for beer, I would probably choose something else. It's nice for a change, I guess.

As a last comment, I must say that I really would have liked to see this one without the artificial sweetener and fruit juice. Although, I'm a layman when it comes to brewing lambics, but I think it would have been nicer if they would have stuck to the actual fruits.

NOTE: ABV is 4%, according to the label.

"Pomme" is French for "apple," and on this Lambic's la- bel, it states apple juice and natural flavor is added. Usu- ally "natural" flavor ends up being a clean, clear sterile extract used for consistency. Suffice it to say, the debate over what "natural" actually means is ongoing.

Head retention is pretty amazing, as it clings to the glass after each sip. Mild haze for a glowing golden-col- ored brew. Big aroma of a bag full of Green Apple Jolly Ranchers or a juice box was thrown in the glass. Very crisp and very smooth, with a fluffy moderate body. Big, tart and juicy sweet green apple flavor. Are we drinking a timid cider or a glass of fresh-pressed Granny Smith apple juice? A bit of Lambic funk seeps in with a mild cellar flavor; then some malt graininess comes through, which is just about enough vindication to pass this off as a beer. Finishes tart and sweet, with a long-lingering apple flavor.

Apple character is dialed up really high here--not bad at all, but this is certainly at the far end of the sweet Lambics. If you want more of the Lambic flavor to come through, let it breathe and warm up a little rather than drink it at the cold temperature (38-41° F) that is advised. Pair this with a walnut-and-grape chicken salad sandwich.

I've had all of the other Lindemans Lambics and have been nothing short of impressed by all of them. This is my first time with the Pomme...let's see if it impresses like the rest of the Lambic line.

A: Poured into a pint glass...light cloudy tannish color with a good amount of carbonation. Very little head that left a very small amount of lacing down the inside of the glass.

S: Smells like a big ripe green delicious apple! I think if I had a big mouth full of green apple Jolly Ranchers, my breath would smell just like this.

T: Apple, Apple Apple! Sweet at first...then moving to a slight tartness, a little bit sour, on the swallow. This is a tangy little number...quite delicious in my opinion.

M: Light mouthfeel, with decent carbonation. Kind of a dry finish to it.

D: The brewers at Lindemans are geniuses when it comes to Lambics! I've not had a Lambic yet that even comes close! I will always be a fan of this brewery! I could drink this stuff all day long!

Yellowish color, a little dull in luster. Thin flat-lying head in a chalice. Laces are thin with scant minimal strings. Highly sweetened but distinct apple aromas, lives in a candy-ish sour ball realm. Light and carbonated mouthfeel. Certainly puts some apple into the Pomme appelation as far as the flavor profile, not as earthy as it should be, but definitely more defined than you find in something like Unibroue Ephemere. Nevertheless, it seems a little bit plastic and on the artificial side, at the same time that its "busting out all over". Interesting slide into a chalky almost oaky wrap-up. Can't say that its really a beer that meets a lot of things I look for in the many styles that are available in the world today.