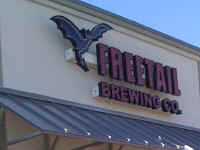 Rated by Ben7773 from Texas

Rated by planthopsjohn from California

4.19/5  rDev +0.2%
vibe: 4 | quality: 4 | service: 4.25 | selection: 4.5 | food: 4
these guys actually have two locations in greater san antonio now, both are breweries, and i was fortunate enough to be able to check them both out. the one addressed here is a neat spot, kind of sportsbar-esque on the inside, dim with televisions all over, unremarkable, but with a killer patio that has plenty of seating and great service. we enjoyed several pints and a a few snacks here. the southern location is really cool, a more mellow, warehouse sort of vibe to the brewery, with a few arcade games, picnic tables, and a very open feel. both have their charms, and both had great selections of beers, including a lot of hoppy stuff, all the classics, some barrel aged beers, and a surprisingly good amount of the ghost pixel beers at each location, which is their side project or experimental arm. they also have coolers with a lot of additional beers to go, including some neat bombers of stuff not on tap. i pretty much liked all the beers we had at both spots, they are making some great stuff, definitely something for everyone whichever location you end up at. i think i like the vibe of the southern one better, but the beers at both are worth checking out! i couldnt imagine a trip to san antonio without hitting these guys up!
Feb 26, 2019
Rated: 3.78 by Jason_cs from Florida

Reviewed by mschipper from Texas

3.36/5  rDev -19.6%
vibe: 3 | quality: 3.5 | service: 3.5 | selection: 3.25 | food: 3.25
On top of a hill with some restaurants just off the loop, there is a hint of a picturesque view on the back end. Freetail's interior has a wide open floor, a shockingly insane number of HDTVs, and even a projector screen. The sound is cranked to 11 on just about every sporting event you can think of. You'd think this was a sports bar first and foremost, except it's a brewpub, and, you can hear the games better than you would a sports bar--is it a plus or a minus? I'll let you decide.

4.18/5  rDev 0%
vibe: 3.75 | quality: 4.25 | service: 4.25 | selection: 4.25 | food: 4
While I'm not impressed with the basic interior or the sound of the room (lots of hard surfaces) at Freetail, it's OK. I'd rather sit outside though. I appreciate that they get a college crowd, and that they support that, and that's what the interior and decor seem to be designed for. I'm not against it, I just want you to know what to expect. The big parking lot is a bonus.

They do have some pretty decent pizza though, and let's face it, we're going for the beer. At least the beers you can't get somewhere else pretty readily. I've found the bar staff to be quite good, well above average, and that makes a difference to me. But again, back to the beer, that's what seals the deal for me: 15 on tap with 4 guests to boot... not bad, and more than half of those are rotating or one-off specialties. Worth a trip.

Reviewed by UniversalIPA_69 from Texas

4.44/5  rDev +6.2%
vibe: 4.5 | quality: 4.25 | service: 4.5 | selection: 4.75 | food: 4
Great environment, nice atmosphere with the people, and decent view of the hillside it resides on. Heard it was more beautiful before they built the houses surrounding the hills but nonetheless very nice scenery to enjoy a cold craft brew. Staff very knowledgeable of their beer selection so very helpful in deciding what beers to have. Overall great experience.
Nov 03, 2015
Rated: 3.98 by IsYoursGold from Texas

Reviewed by Ryno3031 from Texas

3.88/5  rDev -7.2%
vibe: 4.25 | quality: 3.75 | service: 3.5 | selection: 4 | food: 4.5
Vibe - Nice place to go. Usually always packed and has a really good following. Lots of tv's
Quality - I'm a little less impressed with the majority of their beers than many people seem to be. Some of their limited release stuff is very good, but the majority of the what they have on their 16 taps at any given time I find just to be average.
Service - Service seems to be hit and miss. Sometimes I have great service, other times it seems the bartenders couldn't care less if I'm there or not. That's why I rated a 3.5 for service. I will say the past two times I've been, the service has been really good.
Selection - 16 beers on taps and several guest taps.
Pizza is excellent and what keeps me coming back. Highly recommend getting it.

Reviewed by NWFLyer from Arizona