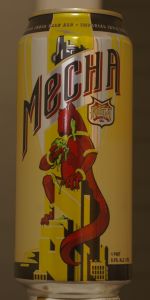 Notes: For some people, hops belong on the basketball court and IBUs should run like shoe sizes. This beer is not for those people. This one’s for the hop hungry. This is our monster, hoppy and heady. Formerly known as Mecha Hopzilla, this is an American Imperial IPA with a unique combination of four different hops and a half-pound-per-barrel, dry-hop process resulting in a powerful flavor that’s not for the faint of heart.

3.86/5  rDev +0.3%
look: 3.75 | smell: 4 | taste: 3.75 | feel: 4.25 | overall: 3.75
Tonight, I am CANcentrating on The CANQuest's (tm) problem children. They are those beers who do not know how to behave in (especially) warm/hot weather & decide to test the limits of their aluminum CANtainer. If I CAN identify them in time, I will move them up in the queue of the backlog & throw them into the reefer in the hopes of salvaging it. Other times, I only hear a metallic "TING!" followed by a gushing explosion. 8={} In those cases, the CAN is dumped, rinsed & placed in The CANQuest (tm) Bag o' Shame to be displayed whenever I go for a lecture.

From the CAN: "This 'Hop Monster' is an American Imperial IPA boasting Bravo, Columbus, Centennial and Citra Hops. Beware of Mecha's powerful flavor and its attack of half pound per barrel dry-hop aroma. Not for the faint of heart or palate. Hop heads, this one's for you! Brewed with love, brewed in New Orleans."; "'Laissez la bonne bière versez' (Let the good beer pour)".

I had a little trouble with getting the vent to Crack! open, but I am an old hand at this sort of thing with many tricks up my sleeve. Once it had been acCANplished, I went with an extra-gentle, extra-slow C-Line Glug so as not to rouse any flocculate. So many times, when a beer is over-hopped, as this one may have been, the dry hops will settle out as powder & I wanted to let them lie in state. There was a good deal of foaming, but it settled into two-plus fingers of dense, foamy, rocky, tawny head with excellent retention, leaving a LOT of lacing behind in its wake. Color was an oh-so-faintly-hazy Amber to Deep-Amber/Light-Copper (SRM = > 13, < 17). Nose was pungent with hops, overlaying a caramel malt backbone underneath. Mmm. Mouthfeel was big and full, as is usually the case with the style. The taste was extremely bitter, really loaded with hops, enough to make even my hophead eyes water in response! Once I got past the initial shock, awe & burn, a minty coolness beCAN to take 'hold, followed by a wash of sweet caramel. Phew! My real bugaboo here was that it was impossible to parse one hops variety from another in the general mélange. I love hops, but I would prefer a little more differentiation in my beer. Finish was hot, dry, bitter, just a real hop monster. Haha.

3.78/5  rDev -1.8%
look: 3.75 | smell: 3.75 | taste: 3.75 | feel: 4 | overall: 3.75
a sturdy and well made double ipa here, honey colored with a faint actually honey character to it, heady and mostly clear, with a ton of hop bitterness, oiliness, fruitiness, and dankness, the full spectrum, and in an appreciably west coast fashion, i dug this one, but could not have a ton of it, its a bit sweet, awfully bitter, and not overly subtle on its alcoholic prowess, it was an easy pint, not necessarily a slow sipper, but a ton of this would ruin a man. hard to place the hops with all the bitterness and countering juiciness here, its both worlds, and while i think more classic northwestern types on the back end, the aroma has me more on a citra and new school, even australian track, tough to place but really complete and delicious, with some stone and tropical fruit, cannabis, and overall intensity. smooth and fuller bodied, well carbonated, sticky even in its dryness, pretty awesome feel here. in a recent extended session of beers from these guys, this was probably my favorite, or darn near it. classic approach, bold and big, i liked this a lot.
Nov 21, 2017
Rated: 3.83 by Furlinator from California

Brief malt that succumbs to the strong hop bitterness. Long, bitter finish and aftertaste. Good carbonation with a lighter body. Not extreme but definitely hoppier thank most.

Rated by Nicolaiw from Denmark

Reviewed by Boto from Connecticut

A: Fairly dark gold, hazy, with good visible carbonation. Forms a half-finger of off-white head with good retention for a hoppy beer.

S: Resin, biscuit malts, and mild grapefruit rind. A pretty tame aroma for a DIPA, but not bad.

T: Juicy grapefruit, some resinous pine. A nice biscuit malt adds some sweetness without any particular caramel flavor. The malts diminish under the hop bitterness at and after the swallow, and you're left with more grapefruit rind and resin flavors.

M: Average body and good carbonation. The alcohol flavors are low, though the listed ABV is also low for style.

O: Despite the claims on the label, this is pretty tame in the world of DIPAs. It's not bad, and decently balanced, but nothing I'd seek out again.

Reviewed by amorpork from Florida

A: Burnt orange with a 1-2 finger white head with decent retention and lacing.

S: Aromas are fairly light but picking up on some citrus with tangerine and oranges.

T: Tangerine, orange zest, and grapefruit mixed with biscuit malts. More malt forward than I was expecting, but maybe it's just an older can.

O: Easy drinking and enjoyable DIPA, and one I would revisit especially with a fresh batch.