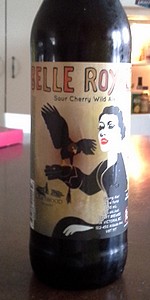 Notes:
View: Beers
Reviews: 25 | Ratings: 70 | Log in to view all ratings and sort
Reviews by seldomseen:

Bottle: Poured a deep reddish color ale with a large foamy head with good retention and some lacing. Aroma consists of intense cherry notes with some tart flavours and some light sweet undertones. Taste is a wonderful mix between some intense cherry notes with some tart notes that are well a balanced against some residual sugar notes. Oak and light vinous notes are also noticeable. Body is quite full with limited filtration. Very enjoyable beer which is almost a mix between Rodenbach and New Glarus.

They say they've aged this for us, so enjoy it now. I'm guessing they had some Pedicoccus that they cleaned up with Brett... in a very nice way!

A: Dark cherry red, pours with a few bubbles, not really any head.

T: An extremely pleasant funk (I'm not getting any Lactobacillus which I'm not keen on). It's somewhat fruity, but the cherry has really been fermented out. Very crisp, but not overly acidic.

split a bottle, 2 nights in a row @ Six Acre in Vancouver

rich garnet-ruby body - really dig the label design as well. Lots of nice cherry, strawberry, oak, mild brett. Not puckeringly sour and not something that makes this stand out above the rest cherry wild ales, but very enjoyable and a good sign of whats to come from Driftwood - a really great BC brewery.

Jesus Christ, I haven't been this impressed with a beer since... I don't even know. Since Hop Therapy, maybe? Actually, I don't know if impressed is the right word in this case; awestruck would be more like it. This is hands-down the best sour beer I've tried in BC. I'll try to keep this review to as little gushing as possible, though, because I hate writing reviews where I just fellate the beer. It'll probably be pretty hard, tho.

Anyway, bottle date was 03/12/13. If it were any fresher, it'd be straight from the barrel (or whatever the hell container they use to age it two years in French/Appalachian oak). It pours this dark red color, with a rosé head that looks absolutely delicious. Microcarbonation abound, leaving tiny lines of bubbles along the glass. It looked so delicious I was salivating, probably due in no small part to looking almost identical to Cantillon's Lou Pepe Kriek, which is one of the best krieks I've ever had the pleasure of tasting.

Smell was funky brett and fairly subdued sour cherries. This is probably the weakest aspect of the beer, since it doesn't smell quite as amazing as it tastes.

Taste was kinda weird at first, because I had just had a Duchesse de Bourgogne for old times' sake and all I could really taste was the brett funk/sourness. I then cleansed the old palate with some nice brie cheese and that's when it hit me: smooth, creamy, delicious sour cherries. They're very subtle; it doesn't bludgeon you with the taste of them (like Duchesse which, while a very fine beer in its own right, is not very subtle in its aromas), but they're absolutely amazing to behold. It ends on a slightly hoppy, earthy note, which balances out the sourness quite nicely. Mouthfeel is smooth as heck. Velvety carbonation coats the tongue.

Overall, I think this may be my favorite BC beer thus far, hands down. Sours (and wild ales, especially) are not easy beers to make; in fact, they're probably the most difficult style to get right. That Driftwood not only managed to not screw it up, but actually made one so goddamn good is absolutely mind-blowing. I keep thinking they can't surprise me any further, and yet they keep doing just that with almost every single seasonal they release. Still, though, regardless of whatever else they release, I doubt anything will come close to this absolute gem of a beer. If I were a millionaire like Henry Ford I'd probably buy up all stock of this for private consumption. Nobody is more deserving of drinking this than I am. Have I mentioned that this beer is 8% and yet it feels like it's maybe 5%, if that? You think you're doing great and then you start rambling on in reviews on BA.

edit: No, I'm sorry. I hate doing this but I have to give this beer a 5 across the board. I had originally rated it a 4.75, but it's just too damn good to rate it that low. I've had three bombers of it so far; I kept trying to think of faults and I really can't find any. I admit I haven't tried any of Russian River's wild ales recently so I don't know how it compares to those, but it's the best wild ale I've had in a really long time, maybe ever. There's no way this beer deserves a lesser rating. It just seems to be a beer to come back to again and again, and every time I have it I remain impressed with its complexity of aromas and character. It truly is a gem of a beer.

Big thanks to FondueVoodoo for this one.

Smell: Very powerful sour cherry, fills the area around me and my nose! Lush with some oak roughness and a hint of sweet cherries (maraschino?).

Mouthfeel: Acidic a bit but not too much, mouth coating as it reaches everywhere in the palate. Dry yet refreshing.

Overall: Truly great. Despite the intensity of the sourness, it remains a very drinkable ale as i was able to drink this fairly easy.

Pink-tan froth over magenta body, creamy froth sticks around. 4
Mulled wine spice to the nose with lemony funk hits. 4
Big nutmeg and spiced cherry tart note, a hint of barnyard, a thread of vanilla, and some grass to end. 4.5
Humming clovey finish and tart refreshing linger.
Med-lt, fizzy, round, creamy. 4

Stunning spice cake thing. Not sure where the nutmeg is coming from, but it works a treat. Not too funky or sour. Hide the 8%. Almondy hint, too; just great integration of spice.

650ml bomber poured into tulip 2/4/13, Massive cheers for Parker who randomly showed up with a case of Driftwood and in all likelihood will never read this

A very dark red liquid leaning towards purple with a short lived light pink foam that sits for a few sips and leaves a random patch of lace, I'll admit the color and pink foam works for me

S the cherries very strong but pumps out plenty of raspberry, strawberry and just a hint of purple grape, almost like sherbert topped with jolly ranchers, it has a candy like aroma but missing much of the sugar. The "Wild" aspects hard to miss with a healthy blast of brett but not overly sour, some vanilla and oak work well and I've fallen in love with the aromas coming out of my glass

T the fruity aspects toned down just a little compared to the nose but that leaves plenty, a little jammy and more earthy notes coming from the barrel, I'm loving the taste but it couldn't quite match the nose

M well carbonated after two years of barrel aging and has a sour twang but its far from turning my mouth inside out, slick on the gums with no booze to mention, very long finish of woody, funky fruit

O the nose is near perfection and I have nothing to complain about elsewhere, a sour without the pucker and the fruity notes are wonderful, this brews put together with some serious skill

Driftwood just blows me away with everything they bottle and this is no exception. I find it funny that my non-beer geek buddy brings me a box of beers that I've already set up trades for with no idea what he's just bought off the shelf. I'm very stoked that I'm going to have another bottle of this coming in the mail, even though it says to "drink fresh" I have a feeling the Brett's just getting started

T: taste starts off with sour cherries. Tart, yet with a slight sweetness. But the beer quickly turns putrid with a distinctly fermented flavor. tastes like a liquid fart (and not in a good way, even for you weirdos who are in to that type of thing).

O: not sure about this one, though I can say that one glass was more than enough.

A - Pours a deep pink colour with a light pink fluffy head of three fingers. Strong carbonation on a cloudy body. Good spotty lace and a half finger retention.

T - Tart cherry, sweet ripe fruits. Not a whole lot of 'wild' like the label denotes. Still lot's of woody and cherry notes with a distinctive tartness that is quite pleasing. Tasty.

O/D - Pretty good stuff here. Not as 'wild' as I was expecting, but the good points were quite good. Nice to sip and deceptively easy to drink on a warm night. Well done.

604growler from Canada (BC)