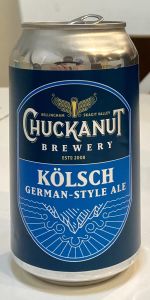 A- A clear golden straw with a two finger white head.

T- Sweet bread, toasted malts, some fruits, getting both apples and pears, floral, a little herbal.

O- A tasty Kölsch, it might be simple and straightforward but that’s not a bad thing. Very well balanced and easy to drink.

Look: Clear, rich yellow with a billowing head that recedes quickly leaving good lacing
Aroma: Straw, cut grass, herbal hop notes, warm bread, light fruity esters
Taste: Follows nose well though more pronounced – bready and grassy, herbal hops intermingle. Soft finish with lots of fruity esters
Mouthfeel: Light to medium carbonation, light but not at all watery – full flavor, and a soft ale-like finish
Overall: This is some tasty stuff and only my second beer from these folks since they started showing up in my neck of the woods about a year ago. Very enjoyable and I hope to try more offerings here soon. A delicious take on one of my favorite styles and definitely a re-buy for me and highly recommended

Light golden yellow that is crystal clear enough that I can read the label if I hold the full glass in front of it. Fluffy egg white head that gets as big as two fingers for sure before settling down to just a nice thick coating. Sticky egg white lacing along the edges as well.

I'm still figuring my way around this side of beer and its traditional presentations and descriptors, but this is pretty much exactly what I expect of the style. Bready, grassy, some spicy noble hops. I saw someone mention chamomile and I can see that.

Flavour is really well balanced between pale bready and straw-like malts, and the light noble hops which offer some mild spice and mild grass and even a touch of mild floral character. It's well balanced and well executed, but I don't find myself enjoying it as much as I do that aroma.

Carbonation swells aggressively and lends it an almost spicy/sharp feel over an otherwise creamy body. Finish is more sticky than dry while the lingering impression is bready and an almost faintly lime-like citrus hopping.

A solid entry in my self-education on this side of the brewing world.

T: Tastes similar with a little lemon rind and a wonderful malt.

F: Moderately light and smooth with a bit of crispness.

O: Smoother and less zingy than I like, but a well crafted beverage showing the skill and refinement of the brewer.

On the palate, this beer is, well, damn near perfect. It's sweet yet balanced; the hops balance the brew while adding little flavor of their own, and even that a grassy, bark-like, neutral tone. Malt tones are grassy, peachy, fruity, and sweet, but lacking any of the pungency or skunkiness of a lesser take on this difficult-to-nail style.

Crisp and lively, with plenty of bite. Smooth and silky.

This is almost certainly the best Kölsch-style ale I've had by an American brewer. There's nothing out of place, not a single note amiss. It's very difficult to find a flaw here. The nose, perhaps, doesn't deliver on exactly what I expected, but that's a very minor quibble.

Absolutely stunning in the glass with picture perfect clarity through the polished brass body. Streams of bubbles support a massive, smooth, and shimmering snow cap of foam above. Excellent retention and good lacing.

Aroma and flavor can be described in unison as the fresh baked bread and dried grass translate seamlessly.

The perfect balance of sweet to bitter is well perceived in part by the spritzy carbonation. The only knock might be that's it's a bit watery, which mutes the flavors like a melted ice cube.

Another outstanding classic style cones out of the masters workshop at Chuckanut. Prost.

Growler from the Growler Guys.

A crystal clear straw yellow with a dense white head with good retention and lacing this looks great. The nose is fantastic. Soft, delicate, mildly fruity, firmly hoppy ,delicate dough and mild honey notes are all present. Notes of straw and biscuit are present. On the palate , this beer exudes a quiet confidence with brilliant balance. Soft, mildly doughy with fresh baked biscuit, straw. A mild, minty, lemony hop character, mildly bitter and with enough flavor to pair beautifully with the honey and mild straw notes from the malt. Drying, soft, mildly fruity and mildly bitter on the finish, this beer is spectacular on the palate, with a delicate but firm feel. Carbonation is medium light, rather perfect for the style. Wonderful stuff.

Pours a clear, light-straw color with low effervescence and a half finger of white head that’s quick to dissipate.

Lemon, camomile, grass and a light twang of funk on the edges in the nose.

The flavor is very light, again with rounded edges. Lighter lemon, a softer, almost soapy tang. A light grassy or herbal element... lemongrass and Noble hops, maybe? A hint of mineral water, and maybe even a little salt. Very light, earthy, grassy bitterness in the aftertaste

The mouthfeel is really nice. Light to medium bodied with a strong punch to the carbonation that gives it a certain crispness despite the “softer” taste.

Overall, it’s very light and easy drinking. It has certain lager-like Euro feel and aftertaste to it, but the nose was more Saison-like.

I'll freely admit that the Kolsch style has never been one of my favorites, and it's a style a very rarely am interesting in ordering. With one exception now. Chuckanut Kolsch.

On tap at Growler Guys.

The beer pours a bright golden amber color with good head retention and lacing. On the nose, there's something of a biscuit and citrus fruit aroma, but with some light pepper and even some light cherry as well. The aroma is very clean and enticing. The flavor profile replicates the nose pretty closely, but there's some noticeable light honey as well. There's just a kiss of light bitterness in the finish, which seems to hold everything together in the flavor profile. Mouthfeel is very light, and there's a clean, fresh, thirst quenching quality to this beer that is just delightful. Alcohol is pretty much unnoticeable in this beer, and so drinkability is very, very high.

Just an altogether excellent effort from the folks at Chuckanut. This is a beer I now order pretty much any time I see it on tap.

On tap:
Tastes more like a Blonde ale than a Kolsch. It is entirely missing characteristic Kolsch yeast and crisp finish. Weak flabby malt character and thick sticky mouth feel. Not a Kolsch.

I had this beer on-tap in a narrow pint glass at the brewery.

Taste: grainy up front with a mild sweetness and a very light hop bitterness. A nice example of the style.

Mouthfeel: medium light body with a decent carbonation and creaminess.

Overall: light and drinkable as a Kölsch should be, but it's just a bit on the astringent side.

I do not normally drink this style, but this beer is not bad at all. Pale and light looking, with a light bitter/hop scent. The taste is light and green grapey. Crisp and dry in the mouth.

16.9oz bottle received as part of a box of (mostly) Bellingham beers from Beertunes. As it happens this exact same style of beer will soon be headed toward him. First ale I’ve had from Chuckanut, and might be the only one they brew.

The aroma is of mild, herbal hops and slightly sweet, biscuity malts. The hops have that herbal, grassy European scent – the label doesn’t say what hops were used, but it seems like they are style-correct.

Mildly bitter, herbal hop flavor initially, but the malts take over midway through, with a fairly crisp finish. There’s a vaguely lemony thing happening in the background throughout.

Light bodied, with an effervescent and fairly crisp mouthfeel. It’s not pilsener crisp, but it’s an ale, and it’s right for the style.

This is something that could be crushed all day. It’s not a flavor bomb (that’s just not in the style description), but its super drinkable. If I walked into a bar and this was on tap and I was going to be there for a while, sessioning this would be a serious option.

Pours a light golden in the Stella Artois goblet with a persistent white foam. Lovely nose of biscuits and straw. Tingly on the tongue with a light malty body.

This is a little grainy with a touch of honey. It's actually a great malt flavor. The hops are aromatic but not as perfumey as the classic examples. Warm and uterly clean in flavor. The grainy taste is quite nice as the lemony finish kicks in. Slight bitterness with a resiny tang.

This is more like a really tasty Blonde Ale than a German Kölsch. Still it's extremely drinkable and better than a lot of this style that are too thin and sharp. From the 500 ml bottle purchased at the brewery restaurant in Belliingham.

I had this on taps at Hill’s in Spokane. It was served in a shaker.

The beer is light gold with a white head and sticky lacing.

It has an aroma of light grains and a bit of floral hops.

The taste is mild with a bit of sweetness and some light fruit notes. I was missing the pear and mineral notes that I like in my Kolsch but maybe this was on older keg?

The mouth is pleasant with good carbonation.

Easy drinker but a bit under powered.

A floral, delicate aroma that's pretty hard to pick up at all. Nice when it's there.

Mouthfeel is where this one shines. Velvety smooth, dances on the palate. Utterly quaffable.

Overall a really solid Kölsch, perhaps the best I've had.

Crystal clear golden straw with a white thin soft head. The aroma is spicy with some honey and clove. The taste is very herbal and I get a real green tea taste. The mouthfeel is light, dry and would be a good hot day beverage. A bit too dry and herbal for my liking.

This was a table favorite. Anyone looking for a lighter beer can't go wrong with this one and I must say it is a refreshing and pleasant beer on a warm day. Easy to drink with a good amount of complexity for the style.

A: Poured a clear yellow color with good carbonation and a small white head

D: pretty good and easy to drink on a warm day. Worth a try

Though shy in its disposition, Chuck's Kölsch is focused. It has a subdued malt character, a mild grainy aroma, and a gently spiced finish that combine for a beer of clean balances and refined finesse. The body is brilliant yellow with a white head trailing fat splotchy lace. Light, creamy, simple, and highly drinkable.

Of note: Chuckanut offers a Tuesday night special on their kölsch, serving it in traditional stange glasses for just $1.50.

Kolsch from Chuckanut Brewery & Kitchen
Beer rating: 88 out of 100 with 66 ratings