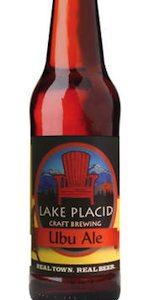 Notes: Our famous English-style Strong Ale, deep garnet red in color, with a smooth, hardy taste and a nice warm feeling to follow.

Deep garnet on the pour with little head and minimal lacing. Has an earthy aroma and a nutty, malty taste with hints of raisins, caramel and chocolate and a smooth finish. A good one!

Poured many times into snifters and English pint glasses, the head size changed between the glasses - smaller and leaving quicker in the snifter than the English pint glass, but both leaving the same amount of messy lace.
Aromas in both types of glasses was always the same semi-sweet roasty nutty toasty to caramel laden and biscuits with some earthiness on the back end.
Flavors were mainly sweet with some nutty toastiness and a pinching little bit of caramel. Aftertaste of caramel, toast and nuts.
Mouthfeel of a roasty toasty sweet grip but not cloying. Medium bodied with some sessionability about. ABV seemed well hidden. Good carbonation. Finishes clean with malt smoothness.
Overall, nicely done English strong ale well worthy of coming back to.

Strong head, decent flavor ... Lake Placid Ubu Ale is supposed to be a British style red. It's not bad, but I perhaps shouldn't have had it right after an Irish red. The flavor profile is totally different. More fruity, less caramel, and definitely less dark. The roasted malt flavor is there, but more smoky than roasty. And the hops are more biting to the top of the tongue. And it finishes very sweet. If anything, I'd call it a younger, rawer flavor than the O'Hara's Irish Red. Not bad, but definitely different.

Oh, and it's just another lab named Ubu, not that one.

Very dark brown in color with a slight red tinge and a receeding tan head. Scent is of sweet malt slight caramel. Taste is very caramel malt based and slightly sweet. There is some slight bitterness on the follow through. Medium in thickness with medium/light carbonation. Not bad but a one trick pony.

I have not had Ubu Ale in quite some time & the revamped label with Ubu, the chocolate Lab, made me think that it was a Brown Ale. Whoops! This bottle was a single from Country Garden 6-Pack here in Lancaster which undoubtedly had some age on it at the time of purchase. This may have been a buried treasure. We shall see.

From the bottle: "Ubu Ale is deep garnet red in color and features a dark, roasted malt flavor. There are no added flavors in this beer - it's the unique grain combination that delivers flavors reminiscent of fruit, brown sugar and chocolate. The beer finishes slightly dry and bitter with earthy hops."; "The mountain village of Lake Placid was once home to a legendary chocolate lab [sic] named Ubu - the biggest dog you've ever seen with an uncanny nose for great beer. Deep garnet red in color[,] this Tnglish-Style Ale is a tribute to the legacy of Ubu. Here's to the legend!"; "Small town, BIG Beer."

I Pop!ped the cap & began a slow, gentle pour into an awaiting glass. Once properly decanted, I employed an in-glass swirl to raise two fingers of dense, foamy, deep-tan/light-brown head with decent retention. Color was Dark Brown to Very Dark Brown (SRM = > 27, < 34) with mahogany highlights. Nose was very sweet and chocolaty, very much like a liquefied milk chocolate bar. Mouthfeel was medium-to-full, very creamy on the tongue, which is where I allowed it to roll around on my initial draught from the glass. The taste had a roasted nuttiness along with a sweet milk chocolatiness and instead of brown sugar, I got treacle. Not terribly dissimilar, but I would not characterize it as brown sugar as it had a slight sharpness. It was precisely this sharpness that I found a bit off-putting. I would have preferred something more rounded or even sweeter. Finish was semi-dry, pleasant enough, but I just felt like one was enough. YMMV.

On tap at The Good Life... Medium brown and semi-translucent body under a thin film of foam... Aromas were of toffee, shellac, and soft, warm brown fruit bread... Flavors were malt-forward, with some warm resin and caramel sweetness and bright points of citrusy zest... Medium-bodied and smooth, modest carbonation, moderately sweet, mild bitterness... Good drinkability...

Take this rating with a grain of salt as I don't review english ales very often. Pours a rich mahogany with a cream head and some lacing. Aroma is pine, citrus and bread. Taste is similar. Feel is light-medium carbonation; soft on the tongue. Overall, I was pleasantly surprised with this. Not a bad beer at all.

A very malty but fairly bland beer with more alcohol presence than it should it have. Could use a hoppier update -- it's too sweet and needs more counteracting bitterness. A malt bomb for sure -- some nice medium crystal maltiness with some finesse, but a bit one-dimensional.

Very nice deep burgundy color. Doesn't drink as thick as it looks. Tastes strong of alcohol but not of malt. The hop profile is very nice and fits the beer very well. Balanced but a bit weak for my tastes.

I was pleasantly surprised by this beer. Pours a rich dark Amber with a creamy head. Aroma is dominated by roasted malts with some earthy hops. Malt is up front in flavor but quickly followed by a nice rounded hop flavor. Great balance to this beer. Creamy mouthfeel with a smooth finish.

My second English Strong Alex in two days. Cold weather really helps. The warming feeling is much appreciated. Good mouth feel and smooth taste. It's definitely worth a try.

Very nice red ale. Nice body, refreshing tang to the malty sweetness (but not too sweet) and just a hint of bitter chocolate. I drank it without food and it really hit the spot.

Very nice brew. Pours a dark reddish brown with minimal foam and lacing. Smell is molasses and a bit of cola. Taste follows with a touch of sweet apple and bitter chocolate. Medium carb gives it a nice feel. A very enjoyable experience. Went well with a hardy dinner.

A mellow version of a true English Strong Ale. Nevertheless a nice respite from the many boring other beers on tap in this Adirondack pub. Smooth as advertised with a clean finish. Could use a stronger kick.

Pours a beautiful clear, dark amber color with garnet highlights and a light tan head. Aroma of brown bread, molasses, toffee, and hints of spicy, and herbal hops. Taste is mostly sweet but not overly so and very much like liquid bread with light herbal notes and a touch sweet in the finish. So easy to drink and paired excellent with salty pretzels.

Can't understand why such a low overall rating for this beer. I've had it twice over the last few weeks, the first time about 20 minutes from where it is brewed in the Adirondack Mountains. Both times, out of the 12 oz bottle. Beautiful color, creamy, dense head and nice malty body with subtle hoppy finish. Sit, Ubu, sit. Good dog.

Light and relatively drinkable for its strength, but bland and cloyingly drenched in burnt caramel by the end of the glass. Not something I would drink again.

Poured from a bottle into a shaker pint, the beer is a dark, vibrant, brown coloring with a filmy, low profile, sparse, off-white head. Aromas of nutty sweetness, cream highlights, and hints of chocolate and caramel. Flavors are very sweet forward, with nut and toffee, chocolate and caramel, cream highlights, and a solid roasted overtone. The body is smooth and light, with a crisp, slightly dry end feel. The aftertaste is roasted and nutty, and that blend lingers through the finish, too.

Given a single bottle by my next door neighbor. Poured at fridge temp into a Duvel tulip. Very dark brown, light khaki head, great lacing. Aroma is roast barley and licorice, Flavor is upfront sickly sweet with a charred bitterness and a metallic aftertaste. Thick, syrupy mouthfeel. This beer tastes terrible and is a trainwreck.

Pours a dark amber brown. Frothing reduces to decent lacing. Fairly active carbonation. Smells of toffee, caramel, and chocolate. Good mouth feel. Creamy. On the nose, full of toffee, coffee, and biscuit. Mild hops mid-palate with caramel malt and maple syrup undertone. Back palate a bit of hop bite, some pepper, some coffee and cream, and more toffee. Aftertaste is coffee and some pepper. Very well rounded. For such a high ABV incredibly easy drinking and smooth. Very good. 4 out of 5.

My first graded review so I'll break down why I graded how I did. Keep in mind, my experience in grading beer is insignificant (I'm a noob, so bear with me).

Look: Poured into 25oz mug, half pour down side, other half down the middle. Dark Caramel/chocolate color with a hue of red highlights. The head was a frothy & full light caramel color but diminished quickly leaving a slight lacing on the glass.

Smell: Sweet malty smell with an earthy undertone. I discerned hints of coffee & perhaps even licorice, but primarily malty with light undertones.

Taste: I found the flavor to be complex, increasing as it approached room temperature. First swig was fairly malty with a nice balance of bitterness that seemed to be a combination of hops & coffee. Little to no hint of alcohol, the flavors masked the alcohol well. There was a hint of chocolate, slight fruitiness & an earthy woody flavor towards the back of the palate as well which became more apparent as the beer approached room temp. The combination of those characteristics made me want more.

Feel: Pleasant smooth creamy mouth feel to it. I liked the amount of carbonation because it didn't interfere with it's other attributes. A very drinkable beer.

Overall: I really enjoyed this beer, nothing was overbearing & the combination of it's features really made me wish I had a few more in the fridge. I'd definitely buy this beer again.